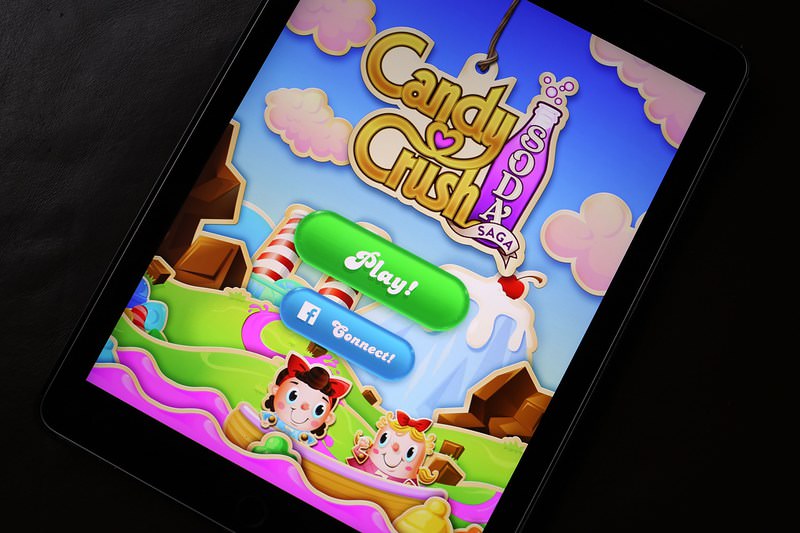 In this photo illustration, a Candy Crush game is seen on an iPad on November 3, 2015 in Miami, Florida. (AFP Photo)
by Nov 03, 2015 12:00 am
Video game maker Activision Blizzard (ATVI.O) will buy "Candy Crush Saga" creator King Digital Entertainment (KING.N) for $5.9 billion, as the heavyweight of console and PC-gaming makes a major push into the faster-growing mobile market.

The deal is one of the biggest in the industry in recent years, more than twice the size of Microsoft Inc's (MSFT.O) $2.5 billion purchase of "Minecraft" maker Mojang last year, and the biggest-ever acquisition of a mobile gaming company.

The failure of Dublin-based King to replicate the success of Candy Crush with follow-up titles such as "Farm Heroes" and "Pet Rescue" has led some investors to think it may be a one-hit wonder.

But Activision, whose shares were down 0.5 percent at $34.43 in early trading, is betting that its experience in sustaining long-running blockbuster franchises like "Call of Duty" and "World of Warcraft" can help it develop new hit series.

Cowen & Co analysts described the deal as "an absolute steal", but others expressed skepticism.

The deal also gives the U.S. company a major presence in the mobile market, where games sales are expected to grow 21 percent this year to $20.6 billion, according to research firm Newzoo.

That compares with expected growth of 7 percent for computer games and 2 percent for TV and console games, although they will still represent the lion's share of the $91.5 billion overall industry, according to the industry researchers.

Activision is paying $18 per share in cash, showing how the company's fortunes have flagged since its 2012 initial public offering at $22.50 per share. The offer is a premium of 16 percent to King's close on Monday.

King's shares were trading at $17.73 on Tuesday morning, indicating that investors don't expect a higher bid.

Analysts at Jefferies & Co were among those expressing some doubts about the deal, saying that King faced a "daunting task" in replicating the success of Candy Crush.

"We expect a heavy dose of scepticism from investors especially given the large deal size," said the brokerage, which nonetheless recommended that investors buy Activision shares.

With the gaming business driven by blockbusters as much as the movie business, some companies such as Finland's Rovio, the maker of Angry Birds, and online games company Zygna (ZNGA.O) have faded after failing to follow up with new hits.

Activision said buying King would help broaden the reach of its games, adding that 60 percent of King's players were female, and that the combined company would have more than 500 million monthly active users across the world.

Activision, whose action games appeal mainly to males, focuses mainly on console and PC-based games whereas King's offerings are designed for mobile devices and playing online.

Santa Monica, California-based Activision said the deal would add to its estimated 2016 adjusted revenue and earnings by about 30 percent. It will use $3.6 billion of cash held offshore to fund the acquisition, and borrow the rest.

King will continue to operate as an independent unit led by Chief Executive Riccardo Zacconi, who told Reuters that Activision appealed to him because of the company's expertise in building long-lasting franchises.

European private equity fund Apax [APAX.UL] listed King in 2014 and holds a 44.68 percent stake in the company, according to Thomson Reuters data.

The deal, expected to be completed by spring 2016, is subject to approval by King's shareholders and the Irish High Court, and clearances by antitrust authorities.

Goldman Sachs and Bank of America Merrill Lynch advised Activision on the deal, while King was advised by J.P. Morgan.