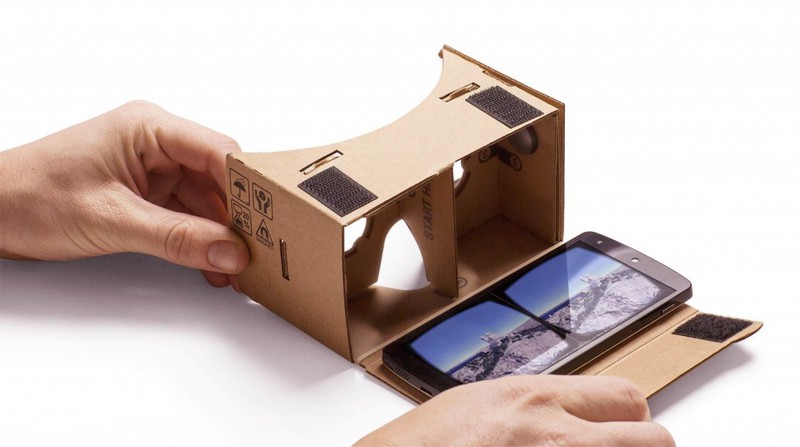 Photo shows Alphabet Inc's ,Cardboard, device, a handheld gadget made from the standard box material that creates a VR viewing experience.
by Nov 07, 2015 12:00 am
YouTube announced two new features Thursday for its Android app that expand the video site's use of virtual reality, giving the new technology its biggest platform yet.

The app now supports VR video - a format that gives viewers what the company says are more realistic 360-degree perspectives of films.

To view it, a user would call up a virtual reality video on the YouTube app, click a button on the video for VR mode, and place the phone in Alphabet Inc's "Cardboard" device, a handheld gadget made from the standard box material that creates a VR viewing experience.

Makers of virtual reality content can upload VR videos compatible with the Cardboard viewer directly to YouTube. YouTube said there are about a dozen VR videos, including one stemming from the "Hunger Games" movies.

YouTube also announced that viewers can see its vast library of videos with a more limited virtual reality experience, also using Cardboard. YouTube said that the videos will resemble what a viewer would see on an IMAX theater screen.

"It's not surprising they would take the angle of adding virtual reality," he said.

Schneider said the public can expect to see an explosion of high quality content, but said amateur content might be more difficult to come by because the gear to create VR content is typically expensive.

But Jay Iorio, a member of the Institute of Electrical and Electronics Engineers who is experimenting with creating films for Cardboard and Facebook's Oculus Rift virtual reality headset, said he would not be surprised to see VR recording capabilities on smartphones.

"The equipment I have right now, people will probably have on their phones in a couple years," he said.

Oculus Rift is scheduled for release next near and is expected to cost between $300 to $350. Cardboard costs between $5 and $50.

The YouTube app with the updated Cardboard technology is currently only available for Android phones but an iOS version is set to be released "soon," according to YouTube.