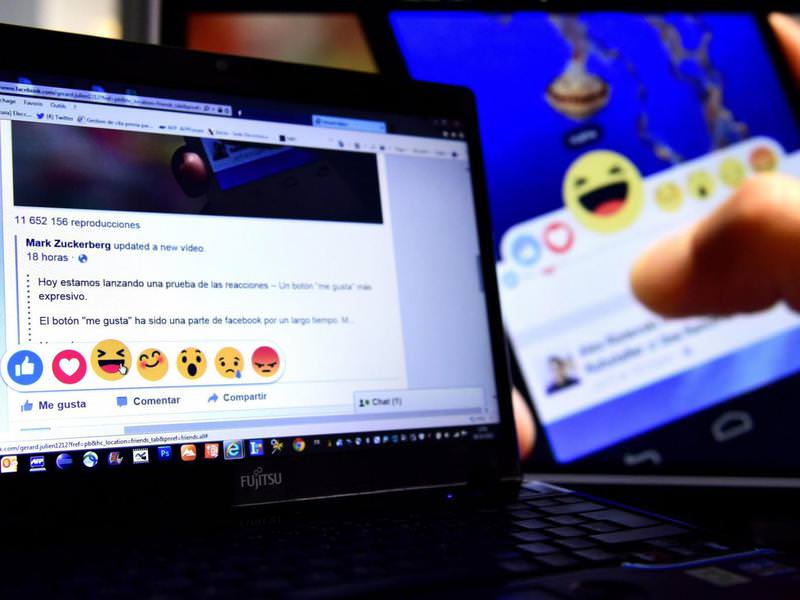 A Facebook user tries out the site's new 'Reactions' feature. (AFP Photo)
by Anadolu Agency Feb 04, 2016 12:00 am
Facebook turned 12 years old Wednesday, an anniversary the company deemed "Friends Day", and announced that its massive community is growing closer than ever before.

The company said last week that 1.6 billion people around the world log in to the service every month, a number that dwarfs any other social media platform.

The amount of users has doubled in size since 2011 and Facebook claims the separation between any random pair of users is just 3.57 degrees, a decrease from 3.74 degrees five years ago.

"This is a significant reflection of how closely connected the world has become," Facebook said in a statement. According to a theory first put forth by a Hungarian author in 1929, every person is six or fewer degrees-essentially "friend of a friend" introductions-from each other.

The new research released by Facebook finds that users on the site are significantly more connected than even this "six degrees of separation" theory.

In another study also released Wednesday, researchers at the University of California Irvine linked a lack of sleep with compulsive Facebook checking. With funding from the National Science Foundation, the report showed a direct connection between chronic lack of sleep, a worsening mood and an increased dependence on browsing Facebook.

Also, because they used Facebook more, participants were less productive.

"When you get less sleep, you're more prone to distraction," lead researcher Gloria Mark said in a statement. "If you're being distracted, what do you do? You go to Facebook. It's lightweight, it's easy, and you're tired."

Facebook chief executive and founder Mark Zuckerberg, however, proclaimed his creation as a force for good in the world.

"Friendship adds meaning to our lives and is a force that moves the world," Zuckerberg wrote in a Facebook post Wednesday.
Last Update: Feb 04, 2016 10:47 pm
RELATED TOPICS