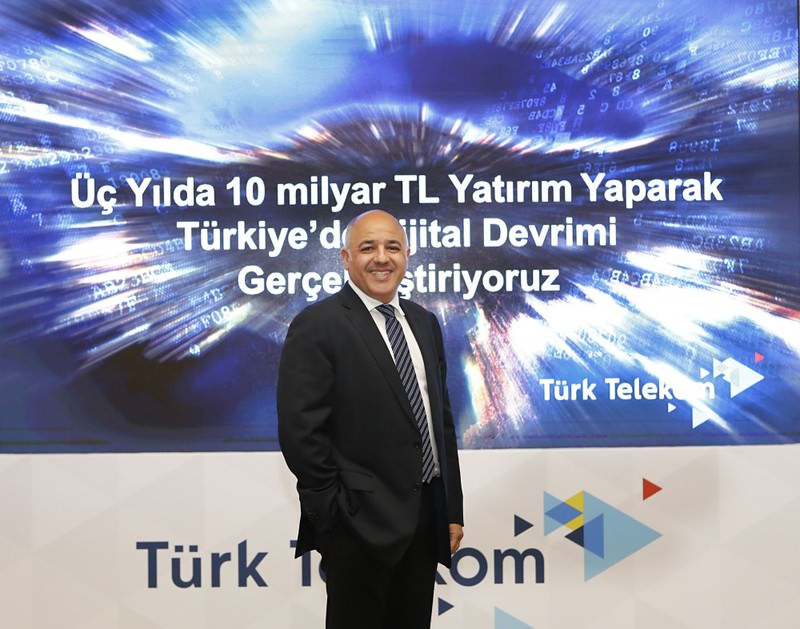 With the aim of initiating the digital revolution, Türk Telekom (TT) is planning to make investments of TL 3.2 billion within three years. The TT, which is financially and operationally strong, will contribute further to the digitalization of Turkey

Türk Telekom's CEO Rami Aslan announced that the company plans to invest TL 3.2 billion ($1.09 billion) in 2016, launching a digital revolution in Turkey with a total of TL 10 billion of investments over the next three years.

At a press conference, Aslan discussed Türk Telekom's end-of-the-year figures, explaining that 2015 was a strong year for the company both operationally and financially. The company increased sales revenues to TL 14.5 billion - a 7 percent increase - and reported its earnings before interest, tax and appreciation at TL 5.3 billion - a 6 percent increase from last year - the highest figures in the company's history.

Aslan pointed out that Türk Telekom's investments totaled TL 2.9 billion in 2015, a figure that increases to TL 6 billion when the contract for the 4.5G spectrum is included.

"We have exceeded our target numbers for 2015 and, therefore, will use this surplus to further the digitalization of Turkey in ways which will cater to customer needs as well as Turkey's local interests," Aslan said.

The investment plan for 2016 is approximately worth TL 3.2 billion, an increase of 9 percent compared to last year's figures. This investment amounts to 21 percent of all revenue for Türk Telekom, well above averages in the sector. "This percentage proves our commitment to investments," Aslan said, pointing to the investment percentages achieved by Türk Telekom last year.

"However, as our minister has mentioned, while these investment levels are promising, we should still strive to make additional investments for the future. We want to connect every household to the fiber optic network and turn Turkey into a digital hub in the region," Aslan said. He continued that representatives from Türk Telekom have made the decision to continue with further investments at the same speed, with an average of TL 10 billion in investments intended to solidify the digital revolution in Turkey.

In late January, Türk Telekom merged its brands Avea and TTNET under the aegis of Türk Telekom. The company also began using its newly designed logo that same day. According to a statement from one of the leading Turkish telecommunication companies, mobile operator Avea and Internet supplier TTNET will operate under the Türk Telekom brand name, effective immediately. However, their legal entities will remain intact.

Since the merger, Türk Telekom customers have gained access to mobile services, Internet, landline services and television services from one shop, one call center and one website. With the strength of its 260,000-kilometer fiber optic cable network, Türk Telekom aims to offer integrated communications, entertainment and television services from a single source without digital disruptions while assuring the highest quality and speed is available for customers.

The new logo is already displayed in Türk Telekom shops, general management buildings and offices, vehicles, personnel uniforms and billboards across Turkey. The website has also been updated with the new logo.
RELATED TOPICS