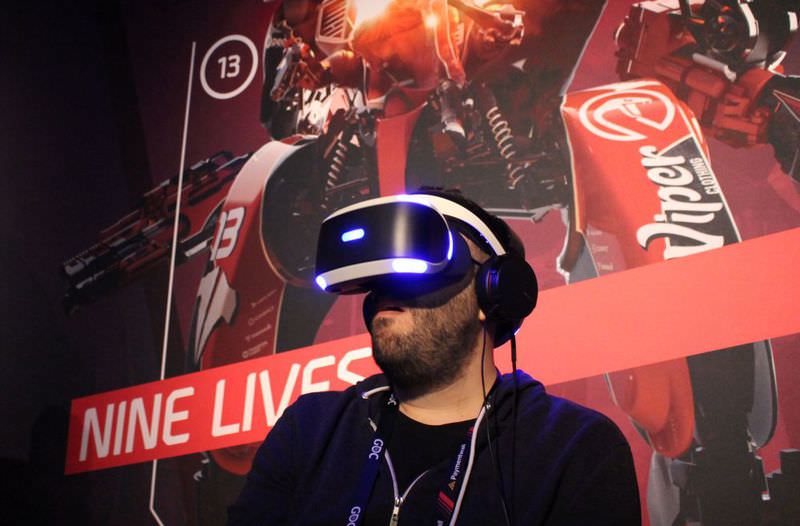 Sony plans to make virtual reality - long the stuff of films cast off into a distant future - mainstream with the October release of the PlayStation VR headgear priced at $399. "Virtual reality represents a new frontier for gaming, one that will forever change the way users interact with games," Sony Computer Entertainment CEO Andrew House said during a press conference in San Francisco on Tuesday. Sony chose October for the launch of PlayStation VR to allow time to produce enough units to meet anticipated demand and to let developers get games ready for the headsets, according to House.

The headsets are designed to plug into PlayStation 4 (PS4) consoles. Sony touted PS4 as its fastest-selling console ever with more than 36 million of them bought since they hit the market in late 2013. But there is competition, and Facebook-owned virtual reality startup Oculus is set to begin shipping its Rift headsets later this month. Oculus has been taking orders for Rift at a price of $599, and has worked with computer makers to certify machines as powerful enough to handle the technology. Pre-orders have also been taken on bundles combining Rift with compatible gaming computers starting at about $1,500.

Buying a PS4 and PlayStation VR would add up to about half that price, however. "We are proud of the price point we have been able to achieve," House said of PlayStation VR. PlayStation VR users will still need to buy camera and controller accessories, pushing the price up slightly, but it is considerably less expensive than rival headsets that sync to gaming computers, according to Gartner analyst Brian Blau. "The cost of ownership of a PlayStation is going to be a lot more affordable than the PC [personal computer] counterparts," Blau told Agence France-Presse (AFP) after attending the Sony event. And, since millions of PS4s have already been bought, the price of adding virtual reality is comparably lower for owners of those consoles since no computer upgrade is needed.

Additionally, more than 230 developers and publishers are working on games for PlayStation VR, with some 50 titles expected to be available by the end of this year, according to Sony. The list included French video game titan Ubisoft, which is creating an "Eagle Flight" game that lets players virtually fly, and a collaborative project between Electronic Arts, DICE and Lucasfilm on a new "Star Wars Battlefront" title for PlayStation VR. PlayStation motion-sensing "Move" wand-shaped controllers were used to provide "hands" in some titles demonstrated at the event.Virtual reality was a hot topic at the Game Developers Conference (GDC) taking place a short distance from the Sony press briefing. Computer chip makers showed off powerful processors designed to handle rendering rich, immersive graphics in virtual worlds. Games shown off at the GDC included titles tailored for PlayStation VR and rivals Oculus Rift and HTC Vive. The 30-year-old GDC bills itself as the largest and longest-running event for professional game makers. This year, GDC integrated an inaugural Virtual Reality Developers Conference focused on "making immersive virtual reality and augmented reality experiences."

The virtual reality portion of GDC had to be moved to larger rooms to double the capacity in response to heavy demand, according to organizers. In a sign that virtual reality is poised to extend beyond gaming, PlayStation VR boasted a Cinematic mode that can let people watch digital video on large virtual screens. House also promised more information on "entertainment content" in coming months. "It makes sense that you should be able to see all kinds of PlayStation content inside the headset," Blau said. "I think it will extend PlayStation into areas it has never been before." For example, Blau noted, PlayStation VR could expand to include sports viewing, streaming films or television shows, and even be put to work use by businesses.