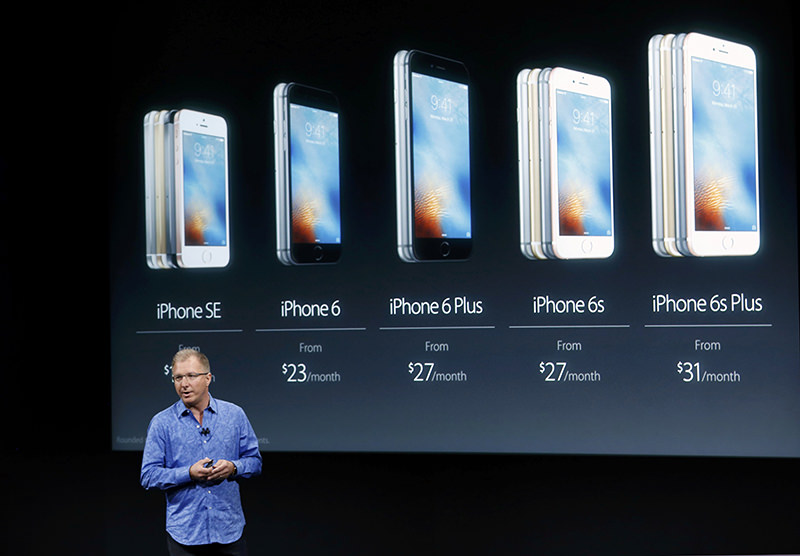 Apple Vice President Greg Joswiak introduces the iPhone SE during an event at the Apple headquarters in Cupertino, California March 21, 2016. (REUTERS Photo)
by Daily Sabah with Reuters Mar 21, 2016 12:00 am

Apple Inc on Monday unveiled a smaller, cheaper iPhone aimed at new buyers, especially in emerging markets and possibly China, the world's biggest buyer of smartphones, as the technology company looks to reverse a decline in worldwide sales of its most important product.

The new device, called the iPhone SE, has a 4-inch (10-cm) screen and starts at $399. It represents Apple's second bid for the crowded mid-tier market after an unsuccessful foray three years ago. Orders start on Thursday, and the phone will be available next week.

The $399 starting price is well below the $649 for the current top iPhone model without a contract, which is beyond the reach of many. The new phone, with Apple's vaunted A9 chip, is much faster than Apple's previous attempt at an entry-level phone, launched in 2013. It also runs Apple Pay and comes in the wildly popular rose gold color.

Analysts had said before the event that a phone priced below $450 could be competitive with other mid-tier rivals. Apple is hoping the cheaper model will stimulate overall iPhone sales, which it expects to decline this quarter for the first time since the company essentially created the smartphone market nine years ago.

After an initial slip, shares of Apple rose to trade around unchanged at $105.92 in early afternoon. The stock is down 20 percent from its all-time high closing price of $133 in February 2015, as Wall Street worries that the company does not have any blockbuster products in the pipeline.

"Apple is so big now that nothing seems to be earth-shaking anymore, and the strategy seems to be turning to offering complementary products like watch bands so they can maintain their sales momentum," said Skip Aylesworth, portfolio manager of the Hennessy Technology Fund.

The company also showed off new wristbands for the Apple watch and a new iPad Pro tablet at Monday's event.

The more compact phone design comes after it expanded the size of the screens in its high-end iPhone 6 and iPhone 6 Plus phones in 2014 to as large as 5.5 inches. That was broadly seen as an attempt to match rival Samsung Electronics (005930.KS) with its large-screen Galaxy phones.

Before the launch at Apple's leafy Cupertino, California headquarters, Chief Executive Tim Cook defended the company's refusal to comply with a U.S. court order to unlock an iPhone belonging to one of the shooters in a December attack in San Bernardino, California.

Apple has a responsibility to protect customers' data and privacy, Cook said, adding that Apple "will not shrink from that responsibility." His statement was greeted by applause from the audience.

The tech company's dispute with the U.S. government has become a lightning rod for a broader debate on data privacy in the United States. The company is set to square off against the U.S. government at a court hearing on Tuesday, likely the first round in a long legal fight to avoid being forced to decrypt the iPhone.