Robots may soon replace friends, be your texting buddies 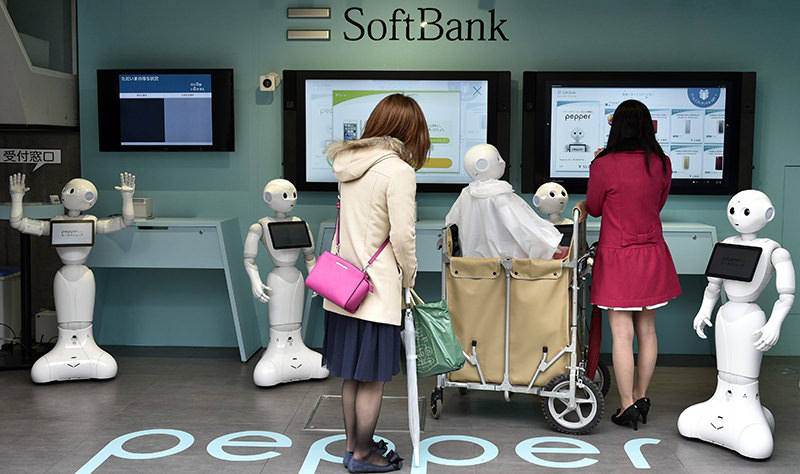 Young women visit a newly opened robot-staffed store in Tokyo, Japan, 24 March 2016 (EPA Photo)
by Associated Press Apr 11, 2016 12:00 am
The robots are coming to help run your life or sell you stuff at an online texting service near you.

In coming months, users of Facebook's Messenger app, Microsoft's Skype and Canada's Kik can expect to find new automated assistants offering information and services at a variety of businesses. These messaging "chatbots" are basically software that can conduct human-like conversation and do simple jobs once reserved for people. Google and other companies are reportedly working on similar ideas.

In Asia, software butlers are already part of the landscape. When Washington, D.C., attorney Samantha Guo visited China recently, the 32-year-old said she was amazed at how extensively her friends used bots and similar technology on the texting service WeChat to pay for meals, order movie tickets and even send each other gifts.

"It was mind-blowing," Guo said. U.S. services lag way behind, she added.

Online messaging has become routine for most people, offering more immediacy than email or voice calls, said Michael Wolf, a media and technology consultant. Messaging services are now growing faster than traditional online social platforms such as Facebook or Twitter, according to research by Wolf's firm, Activate.

And experts say messaging bots can handle a wider range of tasks than apps offered by retailers and other consumer businesses. In part, that's because bots can recognize a variety of spoken or typed phrases, where apps force users to choose from options on a drop-down menu. Reaching a chatbot can be as simple as clicking a link in an online ad or scanning a boxy bar code with a smartphone camera. A special-purpose app requires a download and often a new account sign-up.

Facebook is widely expected to unveil similar tools for its Messenger chat service at the company's annual software conference starting Tuesday. It's already partnered with a few online retailers and transportation companies so consumers can use Messenger to check the status of a clothing purchase from online retailer Zulily, order car service from Uber or get a boarding pass from KLM Royal Dutch Airlines.

At those services, automated chatbots handle some interactions, with supervision from human operators. Similarly, Facebook has been testing a digital assistant called "M'' sort of like Apple's Siri or Microsoft's Cortana that can answer questions or perform tasks like ordering flowers in response to commands on Messenger. It uses a combination of artificial intelligence and input from human overseers.

Another messaging service, Kik, which is popular among U.S. teenagers, opened a new "bot shop" last week. Kik users can talk to bots that will answer questions about the weather, show funny videos or help with online shopping. Slack, a messaging service used by businesses, has partnered with Taco Bell to introduce a "Taco Bot" that helps Slack users order ahead for meals at a local outlet.

In Asia, many smartphone owners are used to playing games and buying items through messaging services like WeChat, which claims 700 million active users. One in five WeChat users has added bank or credit card information so that person can check balances, pay bills or send money to friends, according to the Andreesen Horowitz venture capital firm.

Tech experts are particularly eager to see what Facebook does with Messenger, since its 900 million users make it the world's second biggest chat platform after WhatsApp, which claims 1 billion users. Facebook bought WhatsApp in 2014.

Both are free to users and don't produce much revenue for Facebook. But if Facebook CEO Mark Zuckerberg has given WhatsApp's co-founders leeway with their service, executives have signaled they are increasingly looking for ways to make money from Messenger.

Although Facebook has not ruled out advertising on Messenger, analyst Ken Sena of the Evercore investment firm says a more immediate revenue source could be fees from businesses, such as hotel and travel companies offering to provide reservations and other services through the chat app.

With the help of artificial intelligence programs that learn from interactions, Sena said in a recent report, chatbots "are becoming scarily good" at carrying on human-like conversations.

Or sometimes just scary. Microsoft last month shut down an experimental chatbot , known as Tay, after malicious Twitter users taught the program to repeat racist and sexist statements. Undeterred, the company has pledged to learn from the experience and build better software in the future.
Last Update: Apr 11, 2016 10:33 pm
RELATED TOPICS