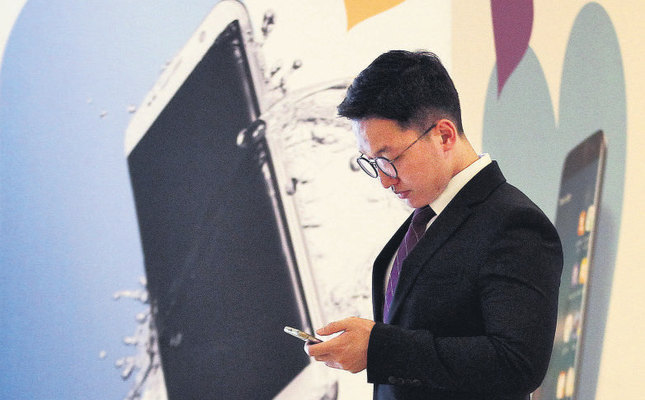 A visitor uses his smartphone in front of an advertisement for Samsung Electronics’ Galaxy S7 Edge smartphone at the company’s showroom in Seoul.

Samsung Electronics, the world's largest smartphone maker, reported a better-than-expected jump in net profits yesterday, boosted by the successful early release of its new flagship Galaxy handset. The result will encourage shareholders after a disappointing 2015 that saw the firm lose more than $8 billion in market value, with its smartphone business sandwiched by top-end rivals such as Apple's iPhone and lower-end devices from fast-growing Chinese outfits Huawei and Xiaomi.

In an effort to defend its smartphone share, Samsung rolled out the latest version of its Galaxy S7 smartphone in March - ahead of new launches by its competitors.

"Our earnings improved after we launched our latest flagship models, Galaxy S7 and Galaxy Edge, on March 11, a month earlier than their predecessors," Lee Kyeong-Tae, the vice president of Samsung's mobile unit, said in a conference call. "The S7 and Edge are showing robust sales performance in regions including North America," Lee said.

Samsung sold 92 million cellphones in the first quarter, of which around 85 percent were smartphones, he added. Samsung's net income for January-March stood at 5.25 trillion won ($4.56 billion), up 13.4 percent from 4.63 trillion won in the same period last year.

The first quarter figure was higher than the 4.42 trillion won average of estimates compiled by Bloomberg News. The company also said it would buy back 2.03 trillion won worth of common and preferred shares.

Samsung said a weakening Korean won against major currencies positively impacted operating profit in the first quarter to the tune of 400 billion won - reflected mainly in component business earnings. The strong Galaxy S7 performance came in the face of a flattening global smartphone market that saw arch-rival Apple on Tuesday report its first-ever drop in iPhone sales since launching the handset in 2007. Apple reported net income of $10.5 billion in the fiscal quarter to March 26, down from $13.6 billion last year. The performance of the Galaxy S7 pushed the mobile division back up to top spot as Samsung's largest earnings source.

In recent quarters that position had been taken by the conglomerate's chip business, which had picked up the slack when the once all-conquering mobile unit started to flag. As well as providing the chips for the company's own handsets, Samsung's semiconductor unit also makes the processors for a number of other companies - including Apple.

"In the second quarter, the company expects its solid performance to continue, led by steady earnings in the mobile and semiconductor businesses," Samsung said.

Sales revenue for the first quarter stood at 49.78 trillion won, an increase of 5.7 percent from a year ago, while operating profit was up 12 percent at 6.68 trillion won. Despite "weak" seasonal demand for memory chips, Samsung said its semiconductor unit managed to achieve solid earnings by expanding sales of high value-added products.

According to research firm IDC, the worldwide smartphone market saw its slowest growth on record of in the first quarter, expanding just 0.2 percent. Samsung kept its number one spot with a market share of 24.5 percent, while Apple stayed at number two with 15.3 percent, ahead of Huawei's 8.2 percent.

Share on Facebook Share on Twitter
Previous in Tech A new feature on the smartphone matchmaking application Tinder has... Next in Tech It is now possible although not easy or particularly convenient, to...
DAILY SABAH RECOMMENDS