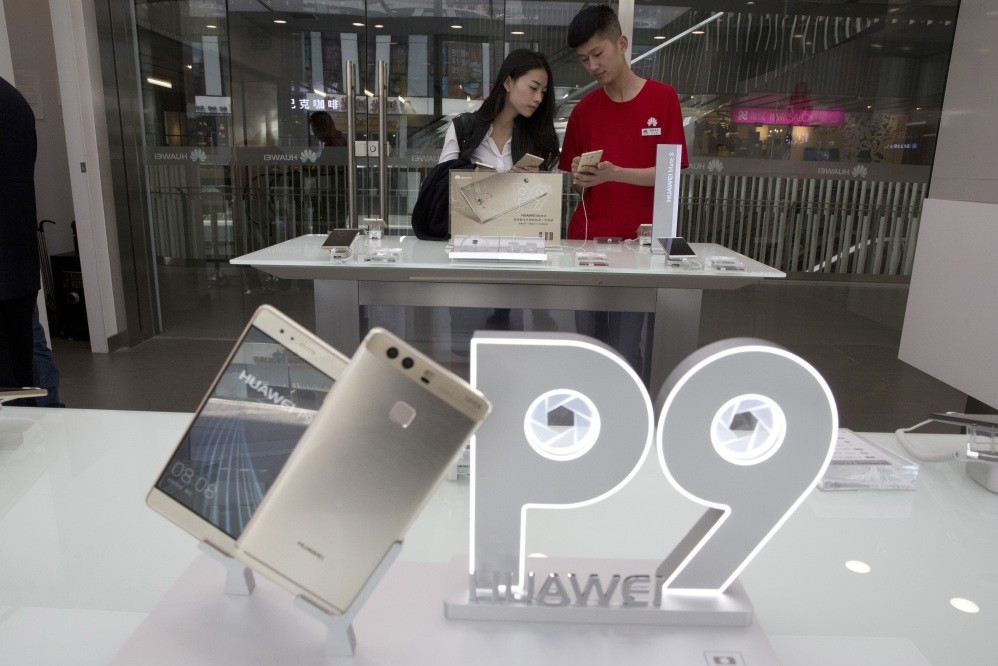 A sales person chats with a customer at a Huawei retail shop with an advertisement for the P9 in Beijing, China.
by Associated Press May 18, 2016 12:00 am

The Chinese tech giant, which pulled its network switching unit out of the U.S. market four years ago due to security fears, became the third largest global smartphone seller last year and passed Apple in China

Huawei Technologies Ltd. wants Americans to start thinking of it as a stylish smartphone brand. Chinese tech giant, which pulled out of the U.S. market for network switching gear four years ago due to security fears, became the No. 3 global smartphone seller last year and passed Apple in China. This year, it launched a new flagship smartphone, the P9, and is positioning it to compete with Apple and Samsung.

"China has yet to create a high-end consumer brand. We want to take that goal onto our shoulders," Eric Xu, one of Huawei's three rotating co-CEOs, told industry analysts at a meeting in April.

To do that, Huawei must succeed in the United States the second- largest market for handsets after China, accounting for one-sixth of global sales, according to industry analysts. There, it starts with almost no market share and a name that consumers, if they know it at all, might associate with anxiety about possible Chinese spying rather than technology and style.

"It is more difficult than any other market they have ever entered," said Nicole Peng of research firm Canalys. "I don't think they have concrete plans yet."

Outside the United States, the company is cranking up a global marketing campaign for the P9 featuring Hollywood stars Henry Cavill and Scarlett Johansson. For markets from Bangladesh to Mexico, it has recruited pop singers and football teams. It partnered with German photography powerhouse Leica to develop the camera on the P9.

The company has yet to say when it might sell the Android-based P9 to Americans or exactly how it will rebuild its U.S. presence.

"We're definitely very patient with the U.S. market," said Joy Tan, Huawei's president for communications, when asked how it planned to connect with buyers. "We hope these phones will be accepted by American consumers."

To meet its ambitious sales growth target of 30 percent a year, Huawei must increase its U.S. market share to double digits from below 2 percent now, said Peng of Canalys.

Huawei, pronounced "HWAH'-way," has big resources to back up its aspirations. It made a 36.9 billion yuan ($5.7 billion) profit last year on sales of 395 billion yuan ($60.8 billion). That was equal to just one-quarter of Apple Inc.'s sales, but Huawei spent $9 billion on research and development to Apple's $8.1 billion.

The company headquartered on a leafy campus in this southern Chinese tech hub adjacent to Hong Kong beat Apple and Samsung to market with a camera equipped with side-by-side lenses, one in black and white and one in color, that it says produces clearer images. The handset is slimmer than the iPhone 6s or Samsung's Galaxy 7 but its screen is bigger than the Apple's.

Huawei's phones now are sold in the U.S. only through its website. But it has a potential opening with phone carriers that are the main sales channel and want more products, according to Gartner analyst Tuong H. Nguyen.

The U.S. market for Huawei's network gear evaporated in 2012 after a congressional panel deemed Huawei and Chinese rival ZTE Corp. potential security threats and recommended Americans avoid doing business with them. The previous year, a government panel forced Huawei to rescind its purchase of a small California computer company.

"This makes it difficult for Huawei and other Chinese vendors to penetrate this market," said Nguyen.
RELATED TOPICS