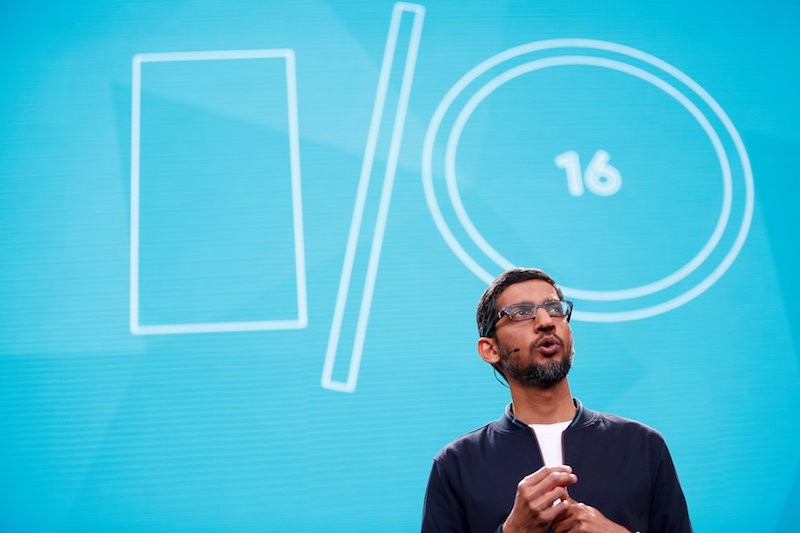 Google wants to play an even bigger role in managing people's daily lives, while also nudging them into an alternate reality, as the Internet company responds to competitive threats posed by Facebook, Amazon and Apple.

As part of an onslaught of upcoming products, Google will implant a more personable form of artificial intelligence into an Internet-connected device called Home, which echoes the Echo, Amazon.com's trendy smart-home speaker.

In an attempt to outshine Apple, Google is also adding features to its Android operating system, including the ability to run apps without actually installing them on a device.

That feature, called Instant Apps, might have been the biggest breakthrough that Google announced Wednesday at its annual developers conference held in an amphitheater located a few blocks from its Mountain View, California, headquarters.

With Android Instant Apps, you'll be able to run any app with one tap, no installation needed. #IO16 pic.twitter.com/QQbJ6xlJCc

It's the first time that Google has held the conference in its hometown since the inaugural event in 2006. Google CEO Sundar Pichai told a crowd of more than 7,000 people that he wanted to move the conference from San Francisco back to Mountain View to underscore a "pivotal moment in terms of where the company is going."

Instant Apps is Google's answer to the pain of installing phone apps you know you'll use just once or twice, for shopping or booking a parking spot, for example. With this approach, the app runs on Google's servers instead of your phone. Only the parts you need are sent to your phone on an as-needed basis.

There will also be a new chat service called Allo that's designed to counter Facebook's Messenger app and WhatsApp. Allo will draw upon a vast database that Google has built through its dominant Internet search engine to predict how you might want to respond to a text and automatically fetch links to video clips and other information that seem relevant to an ongoing conversation.

Allo lets you communicate with anyone in your phonebook—both Android and iOS. #IO16 pic.twitter.com/nhpxGJDRGP

Although the upcoming products will offer some unique features, they mostly painted a picture of a company scrambling to catch up with its rivals.

"The technology looks good in principle, but there's a significant risk that Google is coming into some of these markets too late to make a difference," said Jackdaw Research analyst Jan Dawson.

Google Home, for instance, will mostly do the same things already performed by the Echo, a cylinder-like speaker that Amazon released last year. The Echo responds to voice commands to play music, read books, answer questions and manage calendars. It also turns off the lights, hails Uber rides and keeps adding new tasks as programmers build more apps for it.

Not surprisingly, Google touted its Home speaker as a more intelligent and versatile device, mostly because it can tap into the same stockpile of information that makes Google's Internet search place so popular. Google also has redesigned its virtual assistant to be more conversational and intuitive. It will be the voice and brains inside Google Home.

The Google Assistant: a conversation between you and Google that helps you get things done in your world. #IO16 pic.twitter.com/0bjqyQxVKn

Although it is meant to be more personal than the automated voice that Google currently uses to respond to spoken requests on smartphones and computers, the company is simply calling it "Assistant." That contrasts with the human names given to other virtual assistants from Amazon (Alexa), Apple (Siri) and Microsoft (Cortana).

Google didn't reveal a price for the Home device, though it presumably will be competitive with the Echo, which sells for $180. Even if Home proves to be superior to the Echo, Gartner analyst Brian Blau thinks Google will be hard-pressed to surpass Amazon in the category. Amazon's leadership in e-commerce means it Echo "can always be on the front-page of Amazon's site and that is going to make it difficult for any rival to catch up," Blau said.

Daydream is a new virtual reality ecosystem that will be made available to all comers, duplicating a strategy that worked well for Google after it fell behind Apple following the iPhone's debut nearly a decade ago.

To get the ball rolling, Google will sell a virtual-reality headset with a wireless motion controller expected to carry the Nexus brand that the company original created as a showcase for its Android operating system for smartphones. Google didn't announce the price for the VR headset at Wednesday's conference, nor did it specify when it will hit the market. A similar headset, the Gear VR, made by Samsung and powered by Facebook's Oculus subsidiary, costs $100.

You can do some pretty awesome things with the Daydream controller. #IO16https://t.co/GMKIrNbPYS

Consumers will need a new smartphone to power the headset. It is going to be tethered to the "N'' version of Android that Google plans to release later this year and requires more processing power and sensors unavailable in any phone already out.

The new headset marks a major upgrade from Google's initial foray into VR in 2014, a cheap model made out of cardboard that sells for as little as $15 and is even given away in sales promotions by some companies.

Google's new VR headset won't be as sophisticated as the recently released Rift from Oculus, which costs $600 and must be tethered to computers that can cost another $1,000 or so. Oculus spent several years perfecting the Rift, which features technology that looks so revolutionary that Facebook paid $2 billion to buy the startup in 2014.