Apple Stores getting new look as other retailers struggle 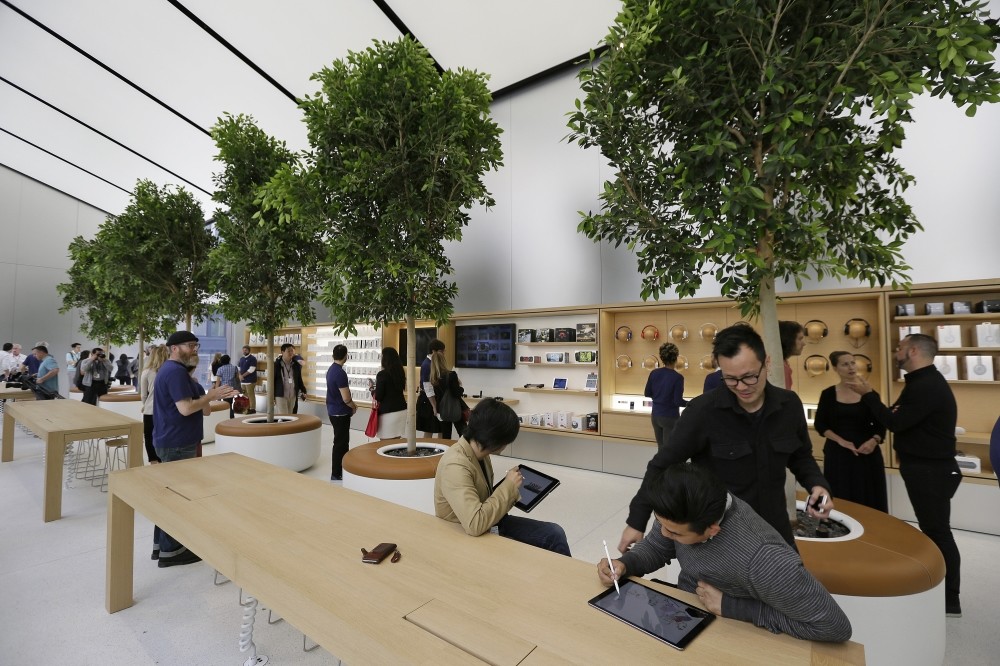 People try products in the u2018Genius Groveu2019 during a preview of the new Apple Union Square Store in San Francisco.
by Associated Press May 21, 2016 12:00 am
Apple is getting ready to unveil a stylish new product that's not for sale -a new look for its stores. The iPhone maker is overhauling its nearly 480 stores worldwide, starting with its new two-story location in San Francisco.

Apple provided a glimpse of its revised approach to retailing on Thursday, the 15th anniversary of the company's first stores in Virginia and California. Since then, Apple's stores have become renowned for their elegant design and employees roaming the floor offering assistance, helping make them among the most profitable in retailing. Despite their success, the stores have been growing stale, said longtime Apple analyst Tim Bajarin of Creative Strategies.

"This is a chance to reimagine a retailing concept that Apple had already nearly perfected," Bajarin said.

Apple could use a boost. Although it remains the world's most valuable company, sales of both its iPhones and iPads have been falling as consumers increasingly hang on to the devices that they already own and hold off on upgrading. The slowdown is the main reason Apple's stock has fallen by nearly 30 percent during the past year.

The San Francisco store, scheduled to open to the public Saturday, is supposed to conjure the ambiance of a town square where people can gaze through giant windows to savor views of the city as they stroll through spacious aisles.

"This is a company statement, not just a retail store," Angela Ahrendts, Apple's retailing chief, said in an interview with The Associated Press.

Unless they're in San Francisco, most Apple fans won't be able to see the new look for a while. The Cupertino, California, company plans to convert about 5 to 10 percent of its existing stores to the concept annually, Ahrendts said. Some stores will probably have to be moved from their current locations in malls to accommodate all the changes. The new layout culminates two years of research by Ahrendts, who Apple CEO Tim Cook lured away from luxury fashion brand Burberry in 2014 to restyle the stores as consumers increasingly shop online instead of brick-and-mortar merchants.
RELATED TOPICS