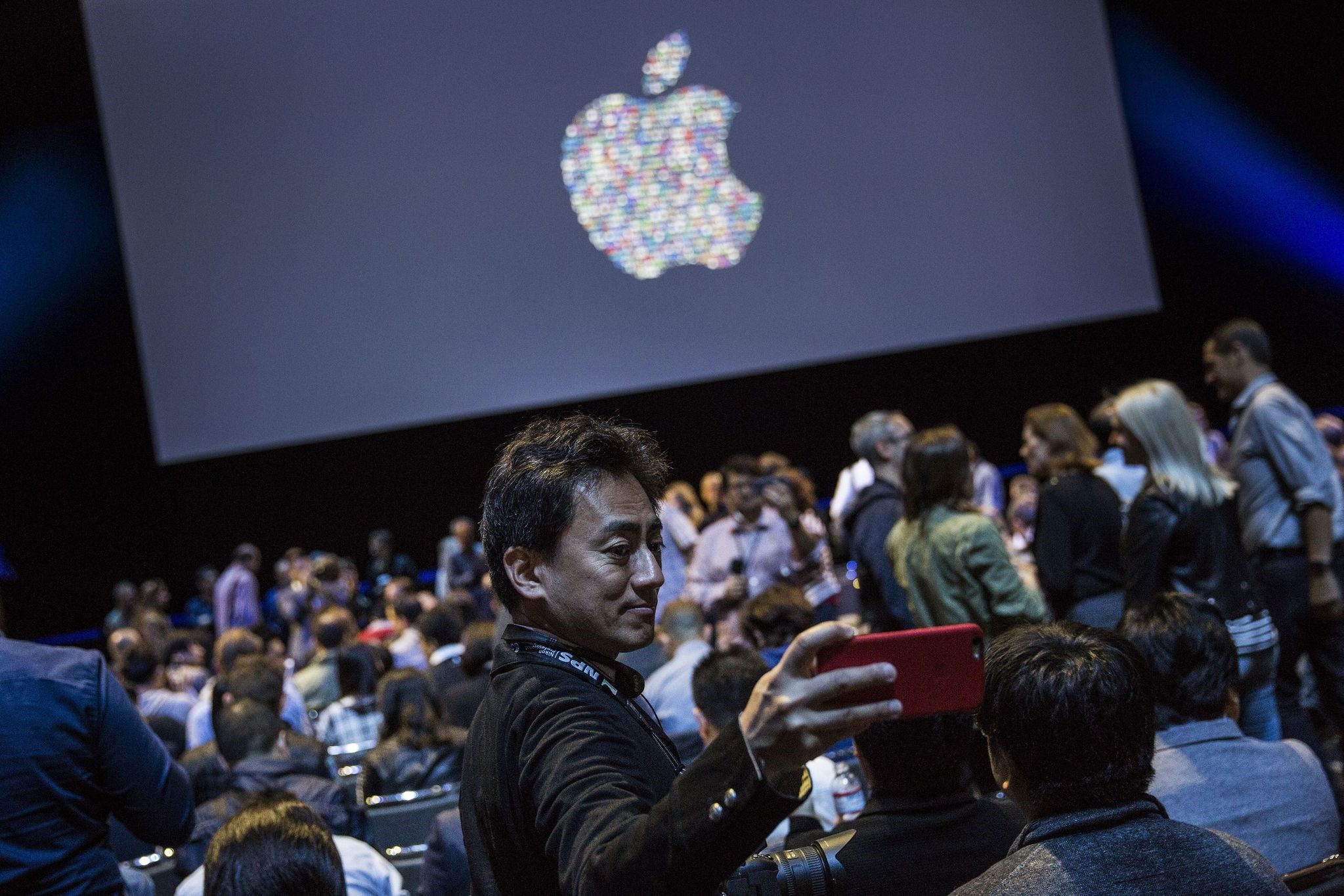 A man takes a selfie while waiting for the start of an Apple event at the Worldwide Developer's Conference on June 13, 2016 in San Francisco, California. (AFP Photo)
by Associated Press
Jun 13, 2016 12:00 am

Apple kicked off its annual software developers conference with new software features for its smartwatch, following a moment of reflection for the Sunday mass shooting in Orlando, Florida.

Saying that Apple offered its "deepest sympathies to everyone whose lives were touched by this violence," CEO Tim Cook called the shooting a "senseless, unconscionable act of terrorism and hate aimed at dividing and destroying."

He noted that Apple makes a point of celebrating its diversity, before asking the crowd to rise and take part in a moment of silence.

As usual, Apple will use the conference to tout software improvements for iPhones, iPads, Mac computers and watches. A possible overhaul of its music service also could be in the mix. After Apple's dust-up with the FBI earlier this year over iPhone security, it might also announce new security measures to protect users' data.

Apple's watch, the company's first new product since Cook replaced co-founder Steve Jobs in 2011, is getting an upgrade in September that will bring fitness tracking to wheelchair-bound users . The retooled watch software will include an "SOS" feature that will automatically call for help in emergencies and the ability to share exercise activities with other people.

AI is emerging as a major new tech battleground, one where Apple may have some ground to make up. Siri made a big splash when it debuted five years ago. But as other tech giants jockey to build intelligent "chat bots" and voice-controlled home systems capable of more challenging artificial-intelligence feats, Siri at times no longer seems cutting edge.

On Monday, Apple announced that Siri will work on Mac computers, and may demonstrate further upgrades to Siri's smarts. The main question is whether it will be enough to keep up with rivals like Amazon, Google, Facebook and others who are racing to create digital services that consumers will find indispensable for shopping, chatting, controlling other appliances and simply getting through their daily lives.

"Google Now has kind of eaten their lunch," said Chris Monberg, co-founder of Boomtrain, a startup that makes artificial intelligence software used by online retailers. Monberg argues that Google's proactive digital assistant provides more useful reminders, recommendations and tips on local weather or traffic, largely because it reads his email and other data from his Android phone and crunches it with sophisticated algorithms on Google's powerful servers.

Amazon's Echo home speaker likewise has its fans; it recognizes informal voice commands and can order flowers, pizza or a ride to the airport. Facebook, Google and Microsoft are also working to incorporate intelligent "bots" into the voice- and text-messaging services that people use to chat with their friends.

In some respects, Siri remains plenty competitive, at least so long as you stick with Apple's other services. Jan Dawson, a tech analyst at Jackdaw Research, notes that Siri can volunteer helpful reminders from the Apple calendar, offer suggestions based on a user's location, or search for images stored in Apple's photo app.

GETTING TO KNOW YOU

Apple, however, has been largely unwilling to pry too deeply into your personal information. And some experts say that puts it at a disadvantage compared to Google, which has compiled vast quantities of data — about both individual users and consumer trends — from its search engine, Gmail, maps and other well-liked online services. (Many of those Google services remain popular on the iPhone, despite Apple's best efforts to replace them.)

With AI, "systems get much better the more they know about the user," said Alan Black, an expert in voice-enabled technology at Carnegie Mellon University. Apple collects plenty of data from its users, but hasn't "focused on connecting all the dots," said Raj Singh, co-founder of Tempo AI, an artificial intelligence startup acquired by Salesforce.com last year.

Google, of course, makes money from advertising that's keyed to individual interests. Apple, which makes most of its money from iPhones, says its software respects customer privacy by working with an individual's data on the iPhone or iPad, while anonymizing information that's uploaded to its servers.

"We don't mine your email, your photos, or your contacts in the cloud to learn things about you," Apple VP Craig Federighi said at the company's Worldwide Developers Conference last year. "We honestly just don't want to know."

Apple declined comment on plans for Siri. Last fall, however, Apple acquired a startup that makes AI software specifically for mobile devices, and another that helps computers carry on extensive voice conversations.