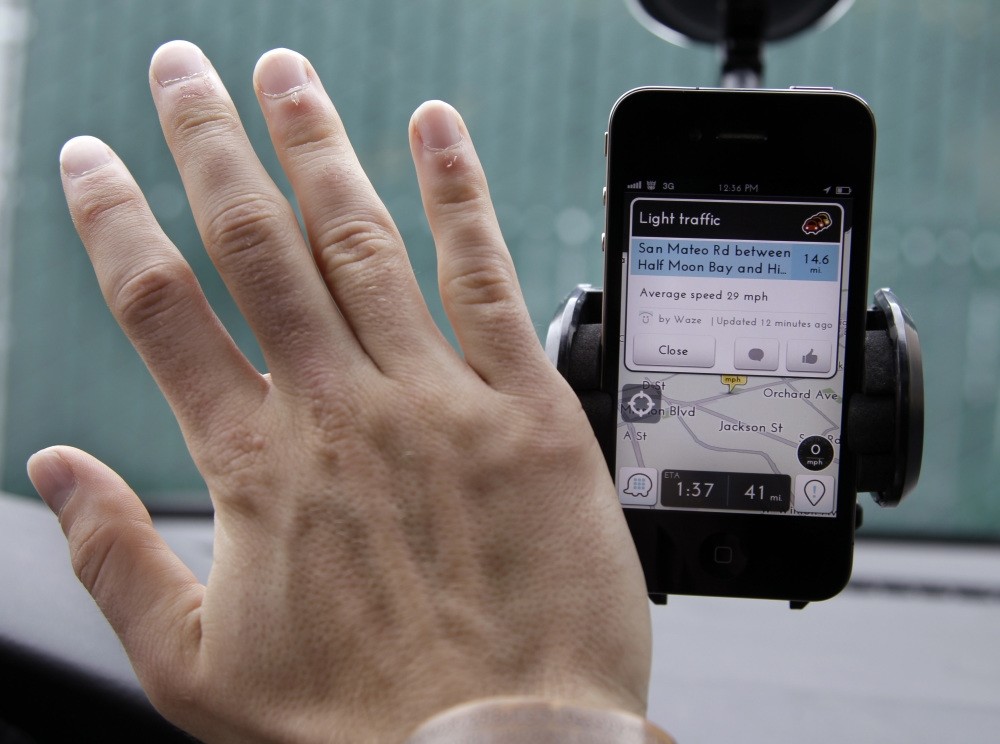 Ben Gleitzman waves his hand over a traffic and navigation app called Waze on his Apple iPhone in a Menlo Park, Calif., parking lot during a demonstration showing traffic conditions on the display.
by Associated Press
Sep 01, 2016 12:00 am

The internet search giant plans to expand a ride-sharing service using its Waze app, setting up a potential showdown with Uber and Lyft. Waze gives traffic conditions and driving directions in real time

Google is preparing to expand a San Francisco carpooling program in a move that could that could set up a showdown with its one-time ally, the popular ride-hailing service Uber. The plans will build upon a test service that Google's navigation app Waze launched three months ago in the San Francisco Bay Area. The program allows anyone using the Waze app to offer a ride to a limited pool of people trying to get to work or home. Now, only people working at six companies, including Google, Wal-Mart Stores and Adobe Systems, can request rides. The tests have worked well enough to encourage Waze to move into the next phase and allow anyone in the Bay Area with its app to request a ride by the end of this year, spokeswoman Julie Mossler said. Inviting more people to hitch rides could undercut Uber, which allows people to request drivers who provide a taxi service using their own cars. Unlike Uber, Waze isn't trying to make money for itself or the drivers offering to share a ride. Instead, Waze sets a variable fee of up to 54 cents per mile to reimburse the drivers for gasoline and maintenance on their vehicles. The riders pay that fee.

Waze also limits trips to a rider's work or home, with a maximum of two trips per day. Although riders can request a ride at any time, Waze is focusing the service on providing trips during peak commute times in the mornings and evenings. Only one rider is allowed per vehicle. In contrast, Uber touts its around-the-clock service as a way for its drivers to make a decent living or supplement their incomes. Uber also hopes to eventually turn a profit itself to justify its financial backers' belief that the privately held company is worth more than $60 billion. Google, now a subsidiary of Alphabet Inc., was among Uber's early investors. It invested $258 million in Uber in 2013.

But the two companies now appear headed down a road more likely to make them foes than friends. Things already have become tense enough to prompt David Drummond, Alphabet's senior vice president of corporate development, to resign from Uber's board because of potential conflicts with Google's ambitions in transportation.

Uber CEO Travis Kalanick confirmed Drummond's departure from the board Monday in a statement that described him as a sage adviser and great personal friend. Kalanick also said he looked forward to "continued cooperation and partnership" with Alphabet. Uber declined to comment Tuesday on the planned expansion of Waze's carpooling service in one of its biggest markets.

Besides testing the Waze carpooling service, Google has been building self-driving cars for the past seven years. Uber is now designing its own robot-powered vehicles and is using some of the autonomous cars to provide rides in Pittsburgh.

Google has previously gone to battle with its former allies. In the most prominent instance, then-CEO Eric Schmidt served on Apple's board for three years, but stepped down in 2009 as Google's Android operating system for smartphones began undercut sales of Apple's iPhone. Before he died in 2011, Apple CEO Steve Jobs told his biographer that he believed Google had stolen ideas conceived for the iPhone's software to create Android.