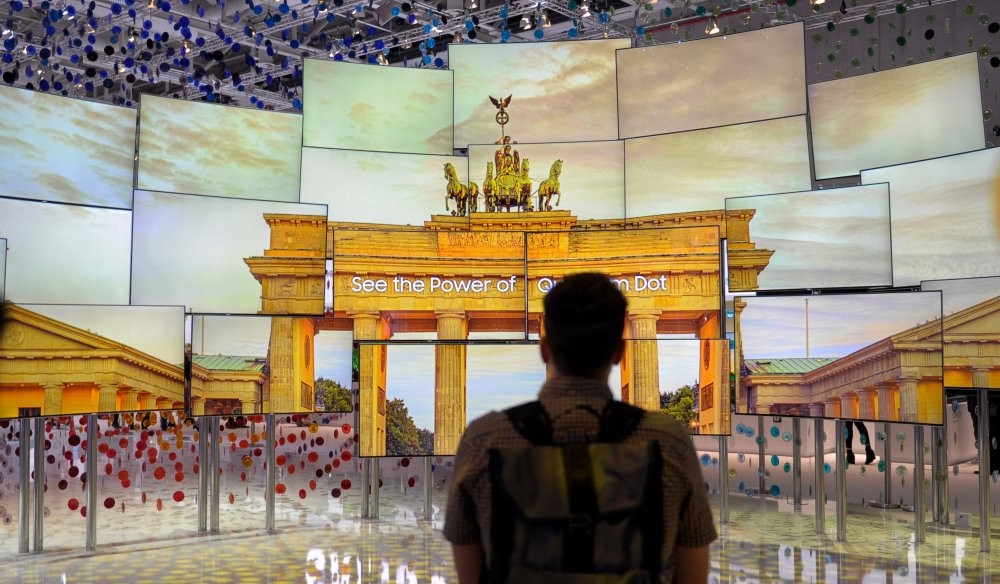 A visitor looks at screens at the IFA Electronics show in Berlin.
by French Press Agency - AFP Sep 05, 2016 12:00 am
Always wanted to know what it would be like to watch a TV talkshow in the studio? Or zoom in on a particular player in a Bundesliga game rather than see a wide shot of the field?

The technology is there for such "live" 3D television experiences from the comfort of your home, according to the Fraunhofer Heinrich Hertz Institute, one of many exhibitors at Berlin's mega consumer electronics show IFA touting the latest in virtual and augmented reality technology. From VR headsets and 360-degree cameras to AR glasses, tech giants like Samsung, Qualcomm and Acer are offering visitors a glimpse of reality-altering experience.

Don a pair of VR glasses at Fraunhofer's stand and you are plunged straight into a TV talkshow. Turn your head to the left to see the crew filming the presenter, while on the right, there are spectators sitting next to you and beyond, the producer with her clipboard. Look up and you see the studio lights.

With its OmniCam-360, the institute has filmed live events that can be replayed back in 3D mode by a viewer wearing VR goggles.

"You can feel the roar of the crowd in the stadium, or see what the television crew is doing, it's the live experience," said Fraunhofer HHI's spokesman Andre Groeger.

"Since 2016, the market has really started to grow because people are now seeing the benefits of using VR," he told AFP. One key factor is the increasing popularity of 360-degree cameras, which are allowing people to take 3-D "panorama pictures while on vacation," he said, adding that the images can be easily shared with friends. A few halls down, a man was waving his arms around, trying to catch avatars on a screen in front of him - giving a glimpse of what a living room could look like once augmented reality invades.

Marek Maciejewski, product development director at Chinese TV maker TCL, said the AR game was just one example of how screens would be used in the future.

"In the next five to eight years, you will look at the screen, which will be on your wall, and you won't be able to tell if it is reality or the screen," he said.

If VR is seeing a boom in 2016, AR is only in its nascent stages of development, even if Pokemon Go has given a foretaste of the potential of the market. The AR gaming app has been a runaway hit, sending millions of people across the world into the streets to catch digital monsters. While many VR headsets can also be used with AR apps, industry experts believe that as the sectors mature, manufacturers will develop distinct gadgets for each area.

"In the medium term, the development of these two trends may converge," said Klaus Boehm of consultancy Deloitte, noting that new offerings such as Microsoft's HoloLens can offer VR on top of AR.

"But even for these mixed reality glasses, specific applications will be developed for new goggle types perfectly," he said.

And that spells more opportunities for the industry.

"AR is a market with a very high potential but the technology is not there yet, and apps are missing but this is something that will come," said Zeiss's Troppenhagen. "I think if you come to IFA five years from now, you'll see very nice AR applications."
RELATED TOPICS