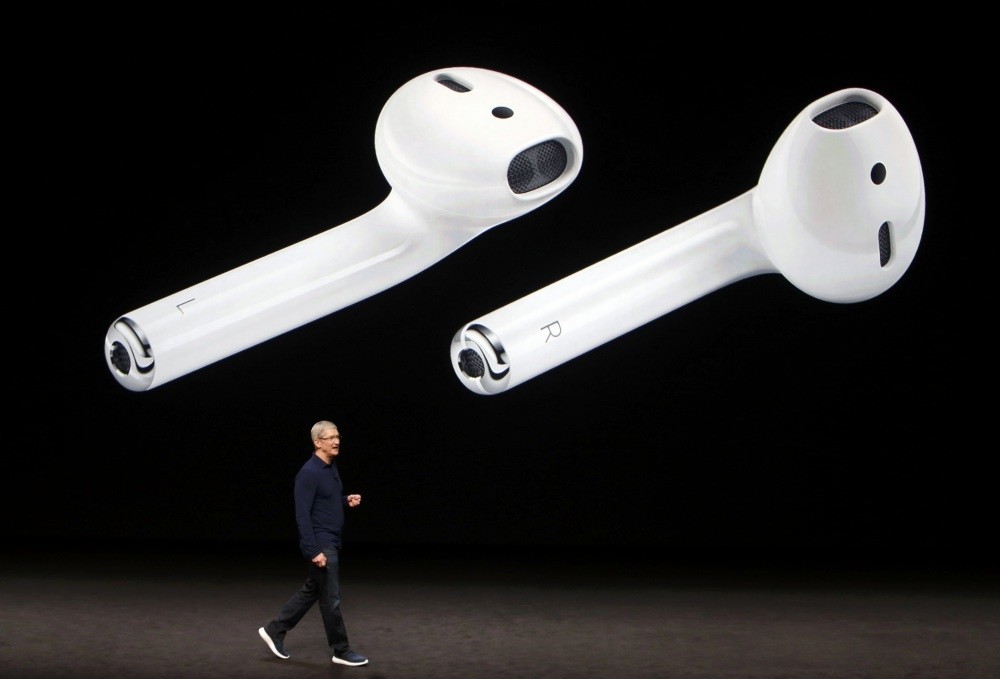 With the new iPhone 7 ditching the audio jack, the technology world is entering an age of discreet ‘hearables' according to experts. Hearables could be a $16 billion market within five years

The new Apple iPhone has something missing: the small socket millions of us have used for

years to plug in headphones. While some fans opposed the widely anticipated move - one online petition urging Apple to keep the headphone jack drew more than 300,000 signatures - equipment suppliers and experts heralded a change in how users will interact with their devices. Axing the jack, they say, paves the way for discreet, bean-sized earbuds that can simultaneously translate, filter out unwanted noise or let us control other devices by voice - and drive up the value of the so-called 'hearables' market to $16 billion within five years.

It's the vision of the futuristic 2013 movie "Her", where a human has a love affair with a disembodied voice in his ear. But some who follow the industry say it's closer than many think, noting improvements in wireless technologies, materials, artificial intelligence and battery life.

Apple justified the removal of the jack as a courageous move to ditch a 100-year-old technology and make more space inside the iPhone. It offered as alternatives a lightning

cable earphone and an adapter for the old type, but touted new wireless earphones.

"It makes no sense to tether ourselves with cables to our mobile devices," said Phil Schiller, senior VP of worldwide marketing, announcing the launch of AirPods, Apple's own wireless earbuds using the firm's new wireless W1 chip, and costing $159.

"We're just at the beginning of a truly wireless future we've been working towards for many years," added chief design officer Jonathan Ive. And that great uncabling has already begun.

Speakers were first: more than 100 million wireless speakers will be sold this year, most of them using Bluetooth, according to SAR Insight and Consulting. Now it's headsets: spending on wireless headsets overtook wired ones last year, says Steven LeBoeuf, founder of Valencell, a developer of biometric sensor technology for wearable devices. The next step is to make those earphones smarter.

German wireless earbud start-up Bragi, for example, last week announced a partnership to hook up its earbuds with IBM's artificial intelligence engine, Watson. IBM said users would be able to communicate, monitor vital signs, receive and give instructions and translate from one language to another using Bragi's smart earphones.

Firefighters would be better able to hear and locate victims and colleagues, and co-workers could collaborate using both hands, said Bragi CEO Nikolaj Hviid.

"This is not about making headphones," he said. "It's about taking the user interface from your eyes and hand and having a much more discreet one when needed. It's part of a bigger puzzle."


Apple hones marketing for Watch with focus on fitness

Two years after unveiling the Apple Watch with apps and styles that tried to appeal to every need and every customer, Apple Inc has honed its marketing strategy, debuting a second generation product aimed squarely at the health and athletic audience. The focus on fitness will enhance the watch's appeal to its core audience but also cements its status as a niche device, analysts said. The new Watch starts at $369, includes a GPS chip, and is waterproof. Apple designed a special edition with sports giant Nike Inc. Exercise buffs on social media cheered the new features, particularly the internal GPS system designed for runners who want to track workouts without dragging along their phones.

Shares of Nintendo Co surged as much as 18 percent Thursday, propelled by a surprise announcement at Apple Inc's iPhone launch event of the debut of the Japanese firm's popular game franchise Super Mario Bros on the iPhone. Investors are betting the new game, Super Mario Run, will be another mobile hit for the Japanese company akin to the wildly popular Pokemon GO, as it moves away from its console-focused strategy and embraces on-the-go gaming. "Launching a well-known Nintendo character on the globally penetrated iPhone is one of the best scenarios that investors have hoped for," Tomoaki Kawasaki, an analyst at Iwai Cosmo Securities, said. Nintendo said it would launch the game initially on Apple's App Store in December.