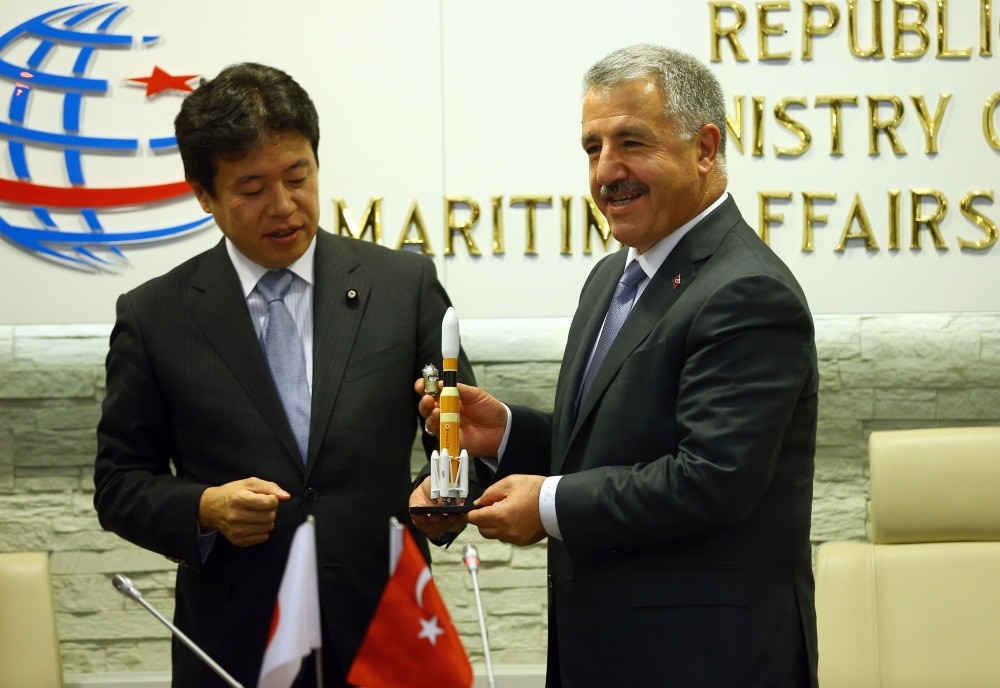 Minister Arslan (R) presented a miniature space craft to Japanese Minister Tsuruho (L) as a gift after the press conference on Thursday.
by Compiled from Wire Services Sep 10, 2016 12:00 am
Turkey and Japan signed a deal regarding satellite and space technologies on Thursday night. According to the newly signed agreement, Turkey's Ministry of Transport, Maritime Affairs and Communication and Japan's Aerospace Exploration Agency will collaborate in the field of space technologies.

Prior to the agreement, Japanese Science and Technology Minister Yosuke Tsuruho and Turkish Minister of Transport, Maritime Affairs and Communication Ahmet Arslan held a press meeting. Arslan stated that Turkey and Japan have been collaborating in terms of space technologies development for many years. He said their aim is to pave the way to experience and knowledge exchanges between Japanese and Turkish institutions and that the two countries have been working to build a space technologies infrastructure in Turkey for six years. "We have observed concrete progress in the space collaboration of Turkey and Japan since the agreement signed between Japanese Cabinet Office and ministries of Education, Culture and Technologies and Turkey's Ministry of Transport, Maritime Affairs and Communication in 2010," Arslan said.

He further stated that the experimental satellite UBAKUSAT, developed and built by Istanbul Technical University (İTÜ), will be launched from Japan by the end of the year as a part of the space and satellite agreement signed between Turkey and Japan. He said: "We have launched bilateral experiment process. Apart from satellites, we also experiment on new space material which was also created by İTÜ on Japanese space stations. We will soon hand over to the Japanese Minister a new material to have it tested on their space station." Arslan also added that that Turkey is guided by the experiences of Japan in the field and said Japan helps Turkey to train experts on space technologies and establish the Turkish Space Agency.

Japanese Minister Tsuruho touched on the failed coup attempt on July 15 orchestrated by the Gülenist Terror Group (FETÖ). He said that they respect Turkey's struggle to protect its democracy under the leadership of the President Recep Tayyip Erdoğan. Tsuruho reminded his audience that the friendship between Turkey and Japan goes back the 19th century and cited the Ottoman frigate "Ertuğrul", which sank off Japanese shores in 1890. He further said there is solidarity and collaboration between Turkey and Japan just when Turkish Airlines (THY) personnel flew to Tehran, Iran to rescue Japanese citizens in A1985. He mentioned that the new space material produced and the satellite developed in Turkey will be launched to space via Japan's space module named "Kibo" (translated into English as "hope") at the International Space Station (ISS). Tsuruho said Japan is ready to offer all the technological knowledge it has to Turkey and the Turkish institutions working on space technologies.

Following the speeches, the ministers of the two countries singed the new deal.
RELATED TOPICS