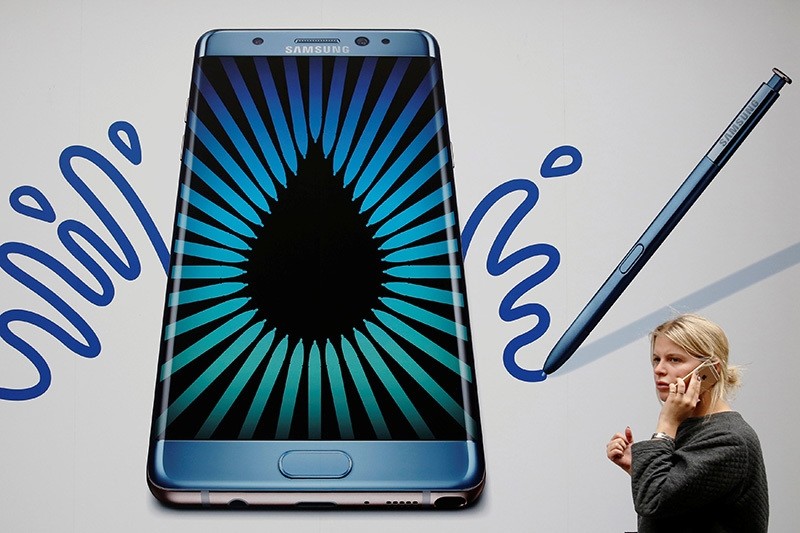 A woman speaks on an Apple phone as she passes an advert for the Samsung Galaxy Note 7 in London, Britain, September 2, 2016. (Reuters Photo)
by French Press Agency - AFP Sep 12, 2016 12:00 am
Samsung shares plunged Monday after the South Korean electronics giant urged global consumers to stop using its Galaxy Note 7 smartphone due to a spate of exploding batteries that raised alarm around the world.

Stepping up its warnings, the world's largest smartphone maker on Sunday told Note 7 users worldwide to immediately turn the device off.

Samsung Electronics on September 2 had announced a recall of its oversized "phablet" after faulty batteries caused some handsets to burst into flames during charging.

Since then, airlines and air safety agencies around the world have warned passengers against using them on flights. The US Consumer Product Safety Commission Friday urged Note 7 owners to stop using the device.

It was the biggest daily drop in the firm's share price so far this year and shaved about 15 trillion won off the firm's total value.

"The whole situation over Samsung is becoming more serious and complicated as more state authorities around the world are advising nationals to stop using the Note 7," said Hwang Min-Sung, an analyst at Samsung Securities.

The fallout from the recall -- which involves 2.5 million handsets sold so far in 10 countries -- may slash the firm's profit later this year by more than one trillion won, he warned.

The recall -- the first involving Samsung's flagship smartphone -- dealt a major blow to the firm's reputation at a time when it faces a growing challenge in all market segments.

Samsung, increasingly squeezed by Apple's iPhone in the high-end market and Chinese rivals in the low-end segment, launched the Note 7 earlier than expected -- ahead of the September 7 launch of the iPhone 7.

The mobile business accounts for a major share of profits for Samsung, which also produces home appliances and memory chips.

Koh Dong-Jin, the head of Samsung's mobile business, said earlier the fault rate for the Note 7 amounted to 24 handsets per million and it would take about two weeks to prepare replacements.

"We are asking users to power down their Galaxy Note 7s and exchange them as soon as possible," Koh said in a statement late Saturday, adding the firm was "collaborating with national regulatory bodies" around the world.

He advised consumers to use replacement phones which would be loaned by the firm until a new Note 7 equipped with fault-free batteries are provided.

"We encourage...Note 7 customers to contact their place of purchase or call the designated call centre locally as soon as possible," said the statement.

A new Note 7 device with a new battery would be provided to South Korean consumers beginning September 19.

Growing concern over the device prompted air carriers and aviation authorities in countries including the US, Australia, Canada, Japan, Singapore, Indonesia and India to ban the use of the Note 7 on board.

But cases of exploding batteries continued to emerge following the recall announcement, as users claimed a burning device had damaged a hotel room in Australia or set a car in the US on fire.

In a widely-reported case last week, a Florida man allegedly saw his car catch fire after he had left a Note 7 charging inside it, with images on social media showing a Jeep engulfed in flames.

Samsung said it was aware of the two incidents, with local authorities investigating the case in the US.

Samsung currently uses batteries made by a number of different companies including its sister Samsung SDI.

The firm refused to identify the supplier of the faulty battery but said sales in China, where it uses a different supplier, would be unaffected. Sales in China started on September 1.