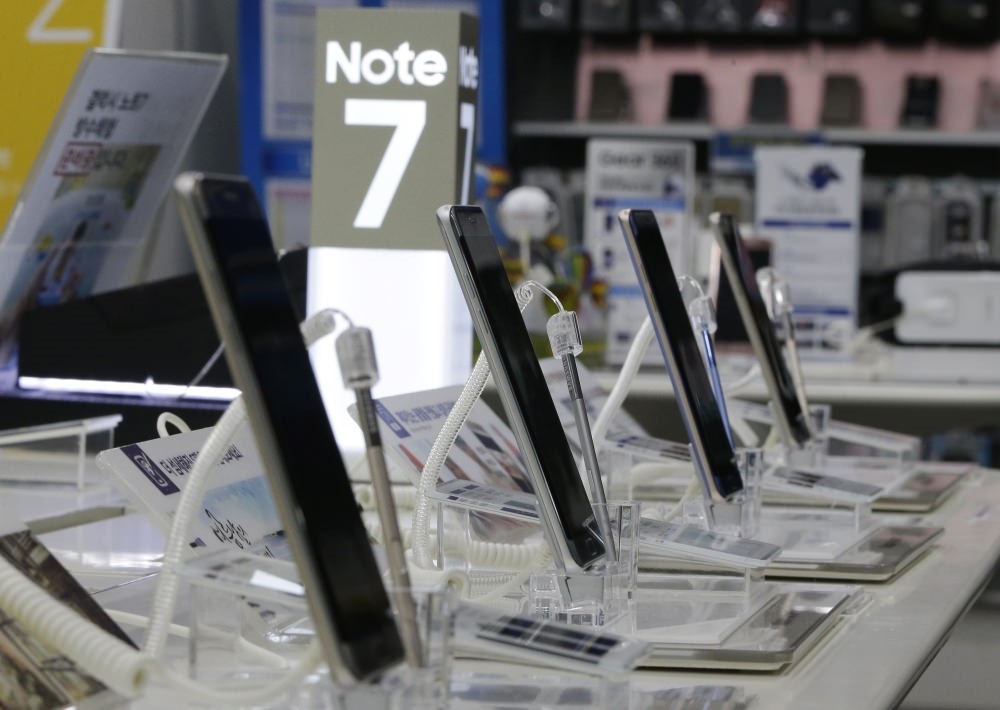 Powered-off Samsung Electronics Galaxy Note 7 smartphones are displayed at the company's service center in Seoul.
by Associated Press Sep 12, 2016 12:00 am

The call for customers to stop using Galaxy Note 7 from the world's largest smartphone maker comes after U.S. authorities urged users to switch the device off and not to use or charge it during flights

Samsung Electronics is urging consumers worldwide to stop using Galaxy Note 7 smartphones immediately and exchange them as soon as possible, as more reports of the phones catching fire emerged even after the company's global recall. The call from the South Korean company, the world's largest smartphone maker, comes after U.S. authorities urged users to switch the Galaxy Note 7 off and not to use or charge it during a flight. Several airlines around the world asked travelers not switch on the jumbo smartphone or put it in checked baggage, with some carriers banning the phone on flights. In a statement posted Saturday on its website, Samsung asked users around the world to "immediately" return their existing Galaxy Note 7 and get a replacement.

"We are asking users to power down their Galaxy Note 7s and exchange them as soon as possible," said Koh Dong-jin, Samsung's mobile president. "We are expediting replacement devices so that they can be provided through the exchange program as conveniently as possible."

Earlier this month, Samsung announced an unprecedented recall of 2.5 million Galaxy Note 7s worldwide just two weeks after the phone was launched. That move came after Samsung's investigation into reports of fires found that rechargeable lithium batteries manufactured by one of its suppliers were at fault.

The U.S. was among the first countries to take a step following the recall. Late Friday, the U.S. Consumer Product Safety Commission urged owners of the phone to turn them off and leave them off. It also said it was working with Samsung and hoped to have an official recall "as soon as possible."

The recall by the safety commission will allow the U.S. Federal Aviation Administration to ban passengers from carrying the phones on planes. The FAA already warned airline passengers late Thursday not to turn on or charge the Galaxy Note 7 during flights and not to put the smartphone in their checked bags.

Scandinavian Airlines said Saturday that it has prohibited passengers from using the Galaxy Note 7 on its flights because of concerns about fires. Singapore Airlines has also banned the use or charging of the device during flights.

Samsung said it had confirmed 35 cases of the Galaxy Note 7 catching fire as of Sept. 1, most of them occurring while the battery was being charged. There are at least two more cases that Samsung said it is aware of - one at a hotel in Perth, Australia, and another in St. Petersburg, Florida, where a family reported that a Galaxy Note 7 left charging in their Jeep had caught fire, destroying the vehicle.

Qantas and Virgin Australia also told customers not to use or charge the devices on their planes.

Along with the recall, Samsung has been forced to delay the handset's planned release this month in several European countries including France. The battery trouble comes as Samsung's archrival Apple launches new iPhone 7 models, with the California company predicting brisk sales as it began taking orders Friday. Samsung released the Galaxy Note 7 on Aug. 19. The Galaxy Note series is one of the most expensive lineups made by Samsung.

The mobile division accounts for the lion's share of Samsung's business, but has been increasingly squeezed by competition both from Apple's iPhone and by lower-end devices from Chinese rivals such as Huawei. Samsung is the world's top smartphone maker, outpacing rival Apple.
RELATED TOPICS