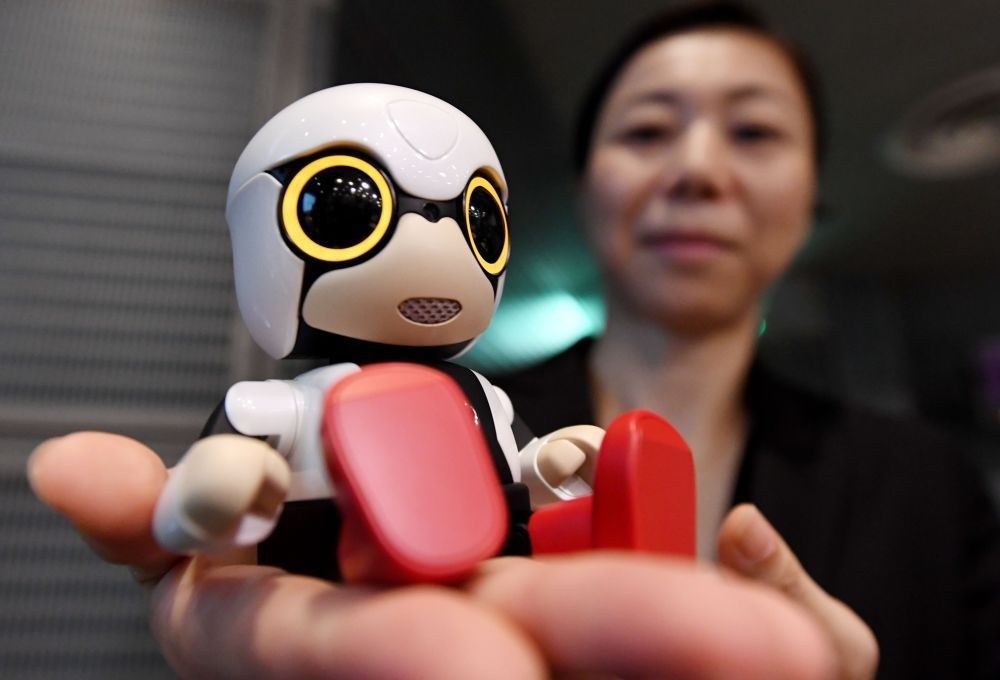 A Toyota employee displayed the company's new communication robot u2018Kirobo Mini' during a press preview in Tokyo.
by Associated Press Oct 04, 2016 12:00 am

The world's biggest automaker will start selling a mug-sized robot called Kirobo Mini as a chatty companion for its human owners. The robot will became the first android to converse with an astronaut in space

The new robot from Japanese automaker Toyota Motor Corp. can't do much but chatter in a high-pitched voice. The 39,800-yen ($390), 10-centimeter (4-inch) -tall, doll-like Kirobo Mini - whose name comes from "kibo," or "hope," and "robot" - supposedly has the smarts of a 5-year-old. Fuminori Kataoka, general manager in charge of the project, says its value is emotional, going from home to car to the outdoors as a faithful companion, although the owner must do all the walking and driving.

Preorders start later this year. Shipments are set for next year. No overseas sales are planned so far. The company said it planned a gradual rollout, initially limited to Tokyo and Aichi prefecture in central Japan, near company headquarters, to get feedback from consumers.

It comes equipped with a camera, microphone and Bluetooth, and connects to a smartphone, which needs to be installed with a special software application. It turns its head toward a voice, although sometimes that function fails as its voice recognition is far from perfect.

"Toyota has been making cars that have a lot of valuable uses. But this time we're just pushing emotional value," Kataoka said.

During an interview with The Associated Press, the robot turned its head to the reporter and then to Kataoka when he replied. But the first time Kataoka asked the robot for its name, it replied by asking what kind of car he had. It got it right the second time. Kataoka just laughed.

The robot is not equipped with face recognition technology, and so it cannot recognize different people. The idea is one Kiribo Mini per person, according to Toyota. More people in Japan are living alone, including the elderly and young singles. And they need someone, or in this case something, to talk to, Kataoka said. But he was amazingly frank about how useless his robot is.

"This is not smart enough to be called artificial intelligence," he said. "This is about the existence of something you can talk to. A stuffed animal might not answer back, but people do talk to it, like my daughter once did this. But if it talked back, wouldn't that be better? And isn't this better than talking to a box?"

Some may find depressing, if not disturbing, a vision of a society of lonely people turning to dialogue with machines. But proponents say that's the reality, and that the technology can serve as a tool to help care for the sick or the elderly.

Naoki Mizushina, researcher at Tokyo-based MM Research Institute, which studies the robotics market, said the robot was too much like talking toys, on sale at cheaper prices, and it seemed to lack concrete functions to make it a big hit, such as linking to online shopping or furnishing convenient information.

"Will this take off? It might be tough," he said.

But those who like gadgets - and there are quite a few in Japan - may want one. Toyota declined to say how many it planned to ready for preorder, or how many it planned to sell in the first year. Toyota remains skeptical about how a partner robot would fare abroad, although it remained open to assessing such interest.

The idea of companion robots is already widely accepted in Japan. Japanese technology and telecom company Softbank Corp. began selling its 198,000-yen ($1,960) Pepper humanoid last year. The first batch of 1,000 sold out immediately, and it has sold 10,000 in Japan so far. Robo Garage, headed by robot designer Tomotaka Takahashi, has brought an array of Kirobo lookalikes, many with more sophisticated functions at higher prices, including Robi, which must be assembled. Kataoka is hopeful Kirobo will be able to avoid the fate of the Aibo dog-shaped robot from Sony Corp., which was discontinued in 2006, despite outcries from fans. He cited advances in technology, such as cloud-based upgrades. Robotics is widely used in auto-assembly plants. Toyota has shown other human-shaped robots before, although this is the first being offered to consumers.
RELATED TOPICS