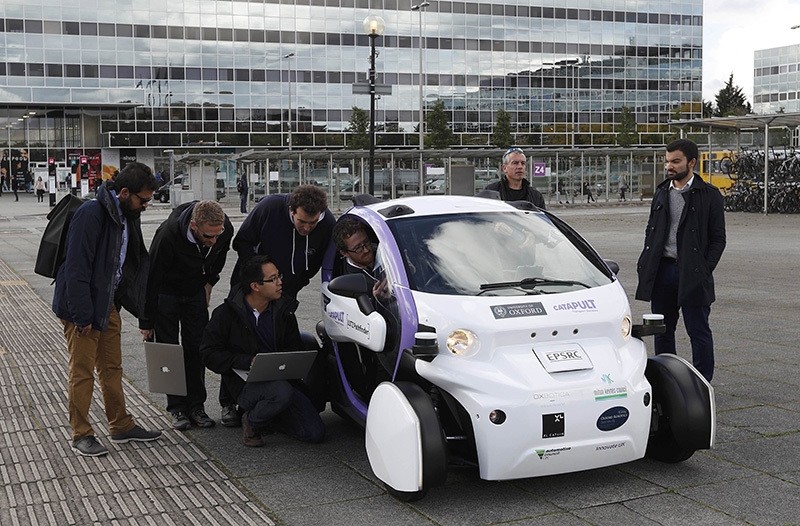 Technicians look at data as a driverless pod is tested in Milton Keynes, Britain, October 11, 2016 (Reuters Photo
by Oct 11, 2016 12:00 am
With the steering wheel turning on its own and radar and camera technology guiding it, a driverless car took to Britain's streets for the first time on Tuesday, as part of trials aimed at getting autonomous vehicles onto the roads by 2020.

The electric-powered pod - like a small two-seater car - navigated its way around a pedestrianised area in the southern English town of Milton Keynes at 5 miles (8km) per hour, turning corners and stopping as pedestrians crossed its path.

The government is encouraging tech firms and carmakers to develop and test autonomous driving technology in Britain, aiming to build an industry to serve a worldwide market it says will be worth around 900 billion pounds ($1.1 trillion) by 2025.

Earlier this year, it launched a consultation on changes to insurance rules and motoring regulations to prepare for driverless cars by the turn of the decade, and said vehicles would be tested on motorways from next year.

The pod, heavily adapted from a compact Renault car, was developed by Oxford University spin-out Oxbotica, with organisers hoping the trials will show how the vehicle interacts with road-users and introduce it to the public.

"The important thing is it's the first time that we've put a self-driving vehicle in the UK in a public space," Neil Fulton, a programme director at the government-sponsored Transport Systems Catapult which coordinated the project, told Reuters.

"If people can see that these vehicles are capable of driving themselves they can gain trust in them," he said.

The pod, fitted with software developed by the Oxford Robotics Institute, has a tablet computer on the dashboard which allows the car to switch to autonomous mode with a touch of the screen.

Carmakers Jaguar Land Rover and Ford are both part of driverless car projects in Britain, as major automakers seek to head off the challenge from technology firms such as Alphabet Inc's Google, which is also developing autonomous vehicles.

But all parties still need to overcome legal obstacles including determining who would be responsible in the event of an accident, with recent incidents involving driving assistance systems raising safety concerns.

Organisers in Milton Keynes ran a number of exercises ahead of the trial including mapping the town and conducting safety planning with the local council.

The city, about 45 miles (70 km) north of London, was selected alongside three other locations for autonomous technology projects partly due to its wide pavements and cycle path network.

Britain aims to be more flexible in its approach to driverless car testing than some countries, with Germany saying it will require 'black box' data recorders in such vehicles and carmakers having to navigate different rules across U.S. states.

But others are moving quickly. Last month, U.S. tech firm Uber launched a self-driving pilot programme on the demanding streets of Pittsburgh.

"Our ambition is more than just cars, more than just pods. It is really anything with wheels that can be automated," Smith told Reuters. "We are certainly thinking about buses ... and the off-road environment, not just pavements and roads."