Note 7 fiasco could burn a $17B hole in Samsung accounts 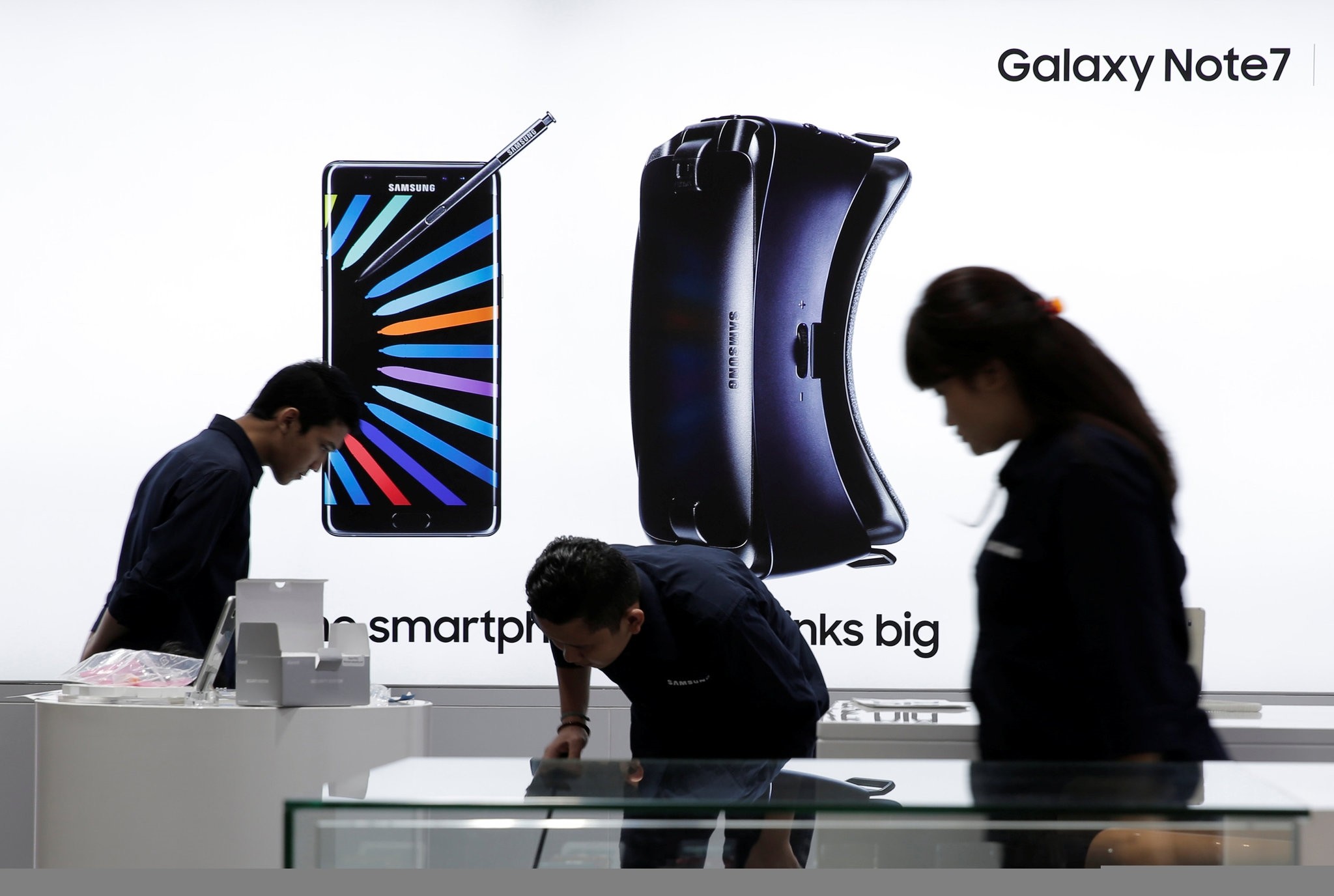 Sales promotion staff stand in front of a Galaxy Note 7 advertisement at a Samsung store in Jakarta, Indonesia.
by Oct 12, 2016 12:00 am

Samsung Electronics' worst-ever recall could cost the company as much as $17 billion after it halted sales of its flagship Galaxy Note 7 for a second time, spelling an almost certain end for the ill-fated premium model

Samsung announced the recall of 2.5 million Note 7s in early September following numerous reports of the phones catching fire and yesterday the crisis deepened: The company told mobile carriers to stop sales or exchange of the $882 device and asked users to shut off their phones while it investigated new reports of fires in replacement Note 7s. As the world's top-selling smartphone company awaits results of probe by U.S. safety regulators, some investors and analysts predict Samsung may scrap the Note 7 and move on to successor models to limit the financial and reputational damage.

"In the worst case scenario, the U.S. could conclude the product is fundamentally flawed and ban sales of the device," said Song Myung-sub, an analyst at HI Investment Securities. If Samsung stops selling the Note 7s, that will translate into lost sales of up to 19 million phones, or nearly $17 billion, that the firm was expected to generate during the Note 7's product cycle, according to analysts including those at Credit Suisse.

That's a big increase from $5 billion in missed sales and recall costs analysts initially exected Samsung to incur under the assumption that the firm would resume global Note 7 sales in the fourth quarter. Chances of that now look slim. South Korea's Hankyoreh newspaper, citing unnamed sources, said yesterday Samsung will likely stop Note 7 sales permanently. Samsung did not comment on the report.

Samsung has already temporarily halted Note 7 production, a source familiar with the matter said on Monday. That could lead to a write-down in inventory in the event Samsung has to end sales entirely. Broker Nomura estimates Samsung may have to incur up to 1.6 trillion won of disposal costs in the fourth quarter, assuming around 4 million Note 7s have been made.

For Samsung, with a market value of $235 billion and $69 billion in cash and equivalents at the end of June, the loss of sales of one model could be absorbed. The bigger problem will be long-term impact on its reputation and brand, analysts and experts say.

"We think the Note 7 incident may hurt demand for Samsung's other smartphone models as well," Nomura analysts said in a note, adding it may have to slash Samsung's fourth-quarter mobile division profit estimates by as much as 85 percent.

Verizon Communications Inc, the largest U.S. wireless carrier, is already considering shifting marketing away from the troubled Note 7s, a company spokesman said on Monday. That will likely boost rival products such as the new Google Pixel and Apple Inc's new iPhone taking market share from Samsung, as most vendors launch new products ahead of the critical year-end holiday sales season.

"The (Note 7) unit is forever going to be tarnished and the danger is that the brand becomes irretrievably damaged as well," said Stephen Robb, a partner at UK law firm Weightmans.

"They need to be writing to every customer with an apology and some form of 'compensation'... It will clearly be costly for the company but the alternative is to end up going the way of Nokia and Blackberry."

Samsung also faces lawsuits, with at least two consumers taking the company to the court in the United States to claim compensation on damages stemming from the faulty smartphone. The firm received 92 reports of batteries overheating in the United States, including 26 reports of burns and 55 reports of property damage, according to the U.S. regulator's announcement of the Sept. 15 recall. The Note 7 woes may also roil Samsung's component business, an important and growing source of revenue, as it provides key smartphone parts such as phone screens and memory chips. Falling Note 7-related orders could not only cut overall revenue for the component business unit, but also crimp prices of such parts, analysts said.