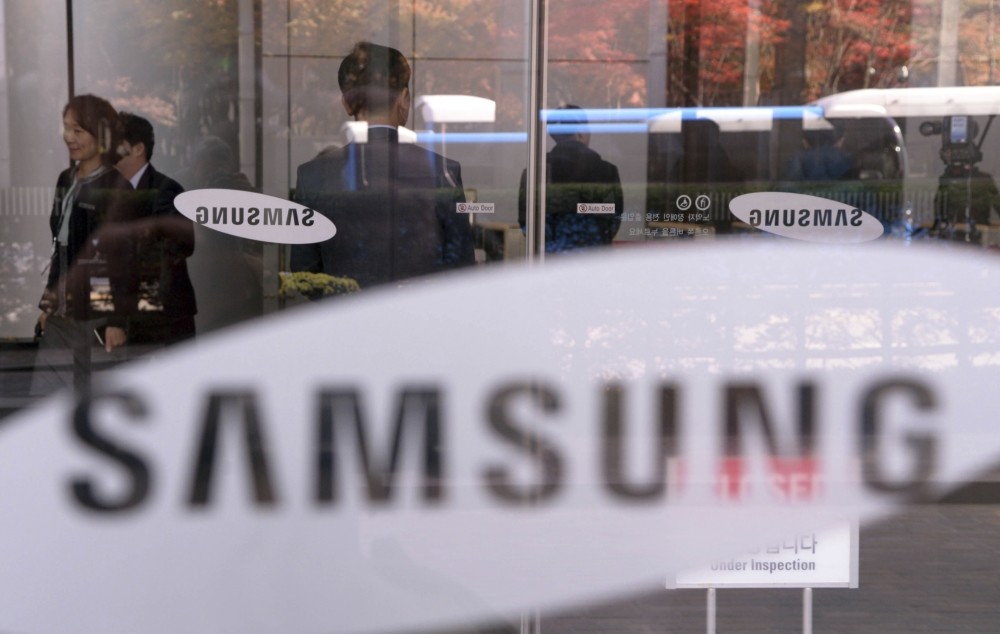 Employees walk past logos of Samsung Group at its headquarters in Seoul, South Korea.
by Associated Press Nov 24, 2016 12:00 am

South Korean prosecutors investigating a corruption scandal surrounding the country's president and her friend raided Wednesday a unit of the country's largest business group, Samsung, and the national pension fund, as public outrage grows over Samsung's alleged link with the scandal. Officials at Samsung Group and National Pension Service confirmed investigators visited their offices in Seoul. The Investment Management Office of the world's third-largest pension fund was the target of the raid, according to an NPS official who declined to be named, citing office rules. The raids took place as the political fallout from the scandal continued to grow after prosecutors charged cult leader's daughter Choi Soon-sil, President Park Geun-hye's long-time friend, and two of Park's top aides on suspicion of interfering with state affairs and bullying companies into giving tens of millions of dollars to foundations and businesses Choi controlled.

South Korea's presidential office said yesterday the justice minister and senior presidential secretary for civil affairs had offered to resign. The resignation offers, if approved, could deal a further blow to Park who was already forced to fire eight of her presidential advisers after the scandal exploded. Park has refused to meet prosecutors who said she conspired in criminal activities with the confidante. While Park faces mounting calls to resign over the scandal, public anger has also been simmering toward Samsung as well because of its alleged links with Choi. It is not the first time Samsung has been raided by prosecutors investigating the scandal, and South Korean reports say that the simultaneous raids of Samsung and the pension fund showed that the investigation was expanding to the contentious Samsung merger. South Korea's Yonhap news agency reported earlier that prosecutors were looking into whether the presidential office played a role in the pension service's vote to support the controversial merger of two Samsung companies last year. Samsung narrowly won shareholders' approval to merge Samsung C&T and Cheil Industries in July 2015.

Most investors and analysts questioned Samsung's argument that the deal was to create synergies between a Samsung construction firm and another Samsung firm that ran an amusement park and fashion businesses.The merger deal was crucial for Samsung heir Lee Jae-yong who held a small stake in Samsung Electronics. It helped Lee, a grandson of Samsung founder and a vice chairman at Samsung Electronics, strengthen his grip on the group's crown jewel, Samsung Electronics, without spending his own money. Shareholders who opposed the merger, including U.S. hedge fund Elliott, said the deal unfairly benefited Samsung's founding families while hurting minority shareholders.

In the end it was National Pension Service, a major shareholder at both Samsung C&T and Cheil Industries, which played the role of king maker in the shareholder vote. The pension fund cast a vote in support of the merger even as some outside advisers recommended it oppose the deal. The pension fund came under scrutiny for how it reached the decision to support the contentious merger. Public anger has been growing in recent weeks after one estimate showed that the value of the pension fund's stake in Samsung C&T, the merged entity, fell by hundreds of millions of dollars.
RELATED TOPICS