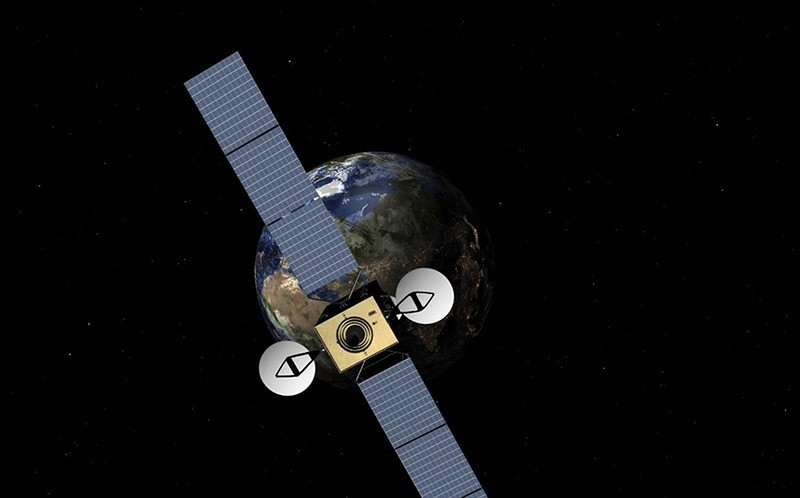 Turkey will launch Göktürk-1 satellite, developed to provide target intelligence for the army with high resolution images to support its fight against terrorism. A more improved version of Göktürk-2, the new satellite will also serve civilian purposes

The Göktürk-1 satellite will be launched today during a live event organized by the Air Force Command and the Undersecretariat for defense industries at the Turkish Aerospace Industries' (TAI) Akıncı Air Base at 4:52 p.m., attended by President Recep Tayyip Erdoğan.

The event marks the culmination of assembly and integration efforts undertaken by the project's main contractor Telespazio of Italy along with France's Thales Alenia Space at their joint facility located in Cannes, where the satellite was designed to provide state-of-the-art satellite imagery to the Turkish Armed Forces (TSK) for the purpose of gathering target intelligence.

The satellite underwent environmental testing at Turkey's first Space Systems Integration and Testing Center (USET) located at the TAI Akıncı Air Base before being sent to the Kourou Launch Center in French Guiana to prepare for orbit.

The first signal will be taken 68 minutes after liftoff

President Recep Tayyip Erdoğan will attend the launch ceremony hosted by the Air Force Command and the Undersecretariat for Defense Industries in a live event at TAI's Akıncı facility. Göktürk-1 satellite, which will be put into low-altitude orbit, will be released from the rocket 57 minutes after the mission begins, opening its solar panels at 59 minutes. The first signal from the satellite will be taken 68 minutes after liftoff.

The satellite, which circumvents the earth approximately every 90 minutes, is expected to take more than 60,000 images per year. Every time it passes over Turkey, the satellite will transfer the photographs and images taken while in orbit to the Air Force Command's Satellite Ground Station.

Designed to transmit images at a higher resolution compared to similar models in orbit, the Göktür-1 satellite will also perform remote sensory tasks for public institutions and organizations in many fields including environment and construction monitors, agricultural cultivation, municipal applications, border control and cadastral activities.

A military intelligence satellite system that will enable Turkey to obtain high-resolution images from any part of the world without any geographical restrictions, Göktürk-1, is designed to provide secure transmission of the said images to ground units. In addition to its use for military intelligence purposes, the satellite will also provide images for civilian purposes. Turkey's first sub-meter resolution discovery surveillance satellite project, Göktürk-1, was developed primarily to fulfill the needs of the Air Forces Command. Costing a total amount of 261.5 million euros, the Göktürk-1 satellite will expedite the fight against terrorism due to its ability to receive high-resolution images.

A more improved version of Göktürk-2, which can take black and white images at 2.5 meters and color ones at 5 meters, Göktürk-1 will be able to capture images in black and white at 0.5 meters (50cm) resolution and in color at 2 meters. The satellite, which will be able to capture 358 frames per day in high resolution, will have a lifetime of seven years. Göktürk-1 will complete its orbit around the world every 90 minutes. The ground station in Ankara will contact the satellite four times a day, and each contact will take about 10 minutes.

Within the scope of the Göktürk-1 project, of which Italian Telespazio and French Thales Alenia Space (TAS-F) are the main contractors, in-orbit delivery of sub-meter resolution Electro Optical discovery surveillance satellite, direct participation in all engineering activities, production and installation of three satellite panels and the establishment of Space Systems Integration and Test (USET) Center are all planned at TAI facilities.

With the Göktürk-1 satellite, the TAI has significantly improved and strengthened the experience it gained during the Göktürk-2 project. Under the scope of the Göktük-1 project, the TAI provides active participation with more than 70 personnel and 850 man-months in over 58 different engineering work packages including design, production, assembly, integration, testing, launching and orbiting. Additionally, the TAI has received the "Qualification Certificate for Space Quality Aluminum Sandwich Panel Production" from the TAS-F in accordance with the European Space Agency's (ESA) standards. Three structural satellite panels used in Göktürk-1 satellite's flight model was manufactured by the TAI's personnel at its own facilities and exported to the TAS-F. Therefore, these panels, Turkey's first exported industrial space products, were used in the Göktürk-1 satellite.
RELATED TOPICS