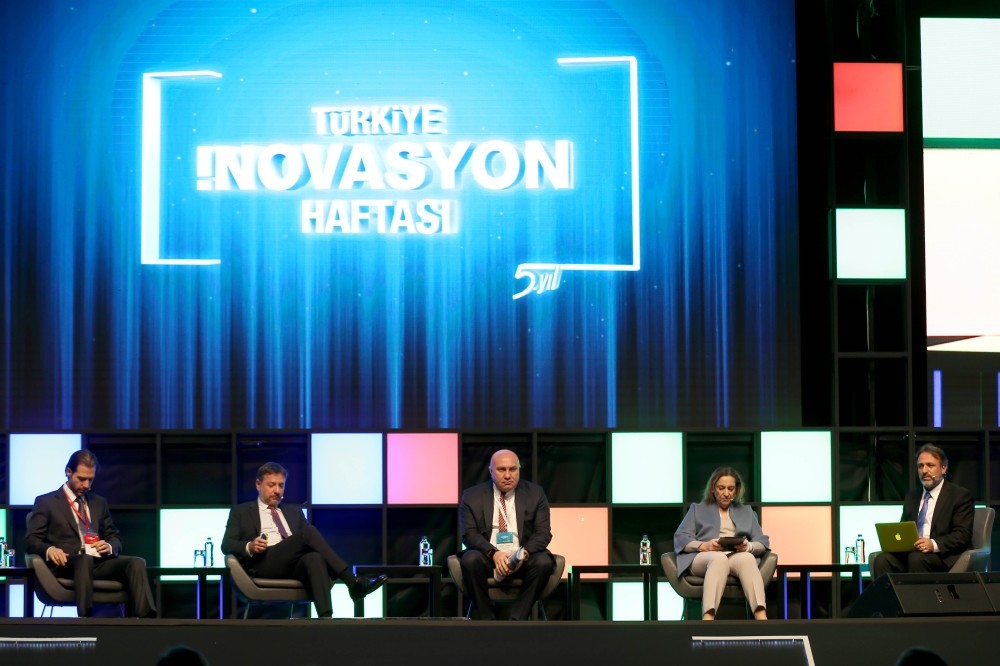 The 5th Innovation Week features bright innovative ideas with potential to boost innovation-driven growth, inspiring the young people with a series of workshops and talks by innovation leaders

Turkey's 5th Innovation Week, a three-day innovation marathon from Dec. 8-10, organized by the Turkish Exporters Assembly (TİM) in coordination with the Ministry of Economy, will be held in the Istanbul Congress Center and will bring a wide variety of people from the business world, industry, and universities working to create an innovation-focused Turkey, started yesterday.

Based on Turkey's latest-branding strategy, "Turkey. Discover the Potential," the Innovation Week calls upon both the Turkish people and the world to discover the potential in Turkey through innovation. Furthermore, with its capacity to draw global and local people involved in research and development (R&D) and innovation, the week is a meeting point of the world of innovation, exhibiting many great projects of R&D centers, Turkey's university techno-parks, technology centers and innovative businesses, as well as start-up projects.

As part of the week, in collaboration with its partners and stakeholders, TİM also organizes many workshops and training seminars, which the assembly hopes will inspire and ignite an innovative fire in the youth.

The Minister of Science, Technology and Industry Faruk Özlü and TİM Chair Mehmet Büyükekşi delivered opening speeches for the Innovation Week. Primarily addressing young people, both Minister Özlü and Büyükekşi underscored the role of the youth in innovation to further advance the development and growth level of a country.

Highlighting the importance of innovation by explaining the innovation-based stories of alibaba.com and the headphones developed to provide simultaneous-interpreting services, Büyükekşi narrated the success story of Jack Ma, the founder of alibaba.com. Jack Ma was repeatedly rejected by various companies until founding one of the biggest e-commerce companies in the world. Büyükekşi explained how Jack Ma applied the experience gained through every door he knocked on to his commercial activities. The TIM Chair also talked about the significance of the new headphones, which will be released in the near future. Explaining the invention, "I am talking about headphones that provide simultaneous interpretation services. When you are speaking Turkish, the headphone simultaneously translates it into English and conveys the speech to the other person. Innovation in developed countries is now realized through software. Ordinary headphones, sold anywhere in Turkey for TL 5 ($1.44), will be turned into the most valuable headphones in the world with incredible software."

After the opening ceremony, the first speech of the three-day event was delivered by Franky Zapata, the world jet-ski champion and inventor of Flyboard. Narrating the story of his invention, he said, "I designed and produced Flyboard since flying has always been a dream of mine. I thought we would secure small-scale sales in France. I uploaded a video on Youtube and the next morning I got 2,000 orders. In just a short while, Flyboard had spread to the whole world. We created Flyboarding and a Flyboard industry within 5 years." He also suggested in his speech that money should only be a medium, rather than an ultimate goal.

Industry 4.0, namely the 4th Industrial Revolution, is one of the areas promoted by the Innovation Week. As the week aims to create potential innovators, it also promotes Industry 4.0 as the new manufacturer of technologies and emphasizes its importance in industrial processes. Industry 4.0 is generally defined as the next phase in the digitization of the manufacturing industry. The expanding data volumes, computational power, connectivity, the emergence of business intelligence, new kinds of interaction between humans and machines and the increasing involvement of robotics in manufacturing are all the trends that have brought about by what today's industrial world calls Industry 4.0.

As an event that aims to bring together the latest manufacturing trends and innovation professionals and aficionados, the Innovation Week emphasizes the importance of R&D activities and innovation in manufacturing, the key element of exports. As the chair of Turkey's largest exporters' association, Mehmet Büyükekşi highlighted the role played by innovation in its further development, "Without the innovation-driven spirit of our exporters, exports would not constitute such a large portion of our economy," he said.