US tech workers vow not to help Trump surveil Muslims 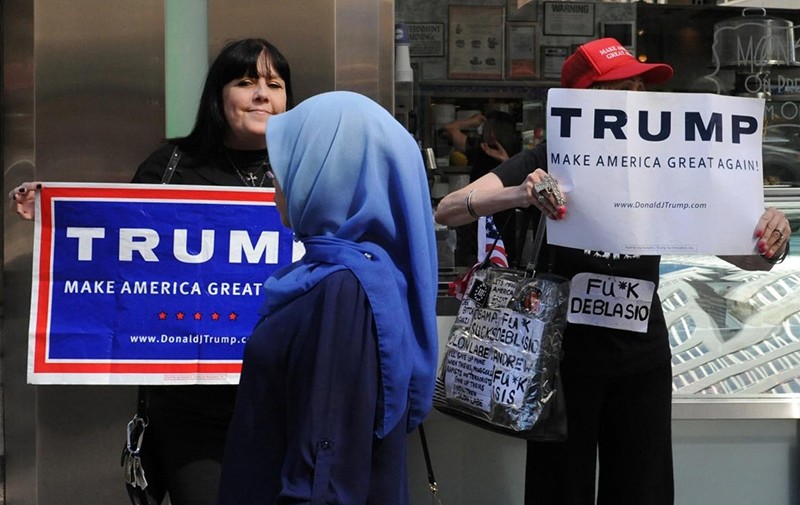 A woman wearing a Muslim headscarf walks past people holding U.S. Republican presidential nominee Donald Trump (Reuters Photo)
by Dec 14, 2016 12:00 am
More than 200 employees of technology companies including Alphabet Inc's Google, Twitter Inc and Salesforce pledged on Tuesday to not help U.S. President-elect Donald Trump's administration build a data registry to track people based on their religion or assist in mass deportations.

Drawing comparisons to the Holocaust and the internment of Japanese Americans during World War II, the employees signed an open letter at neveragain.tech rebuking ideas floated by Trump during the campaign trail. The protest, which began with about 60 signatures but had more than tripled within hours of publication, comes a day before several technology company executives are due to meet with the real-estate developer in New York City.

"We are choosing to stand in solidarity with Muslim Americans, immigrants, and all people whose lives and livelihoods are threatened by the incoming administration's proposed data collection policies," reads the letter, signed by a mix of engineers, designers and business executives.

It continues: "We refuse to build a database of people based on their Constitutionally-protected religious beliefs. We refuse to facilitate mass deportations of people the government believes to be undesirable."

The letter vows to not participate in creating databases of identifying information for the U.S. government on the basis of race, religion or national origin, to minimize the collection or retention of data that could facilitate such targeting and to oppose any misuse of data at their respective organizations considered illegal or unethical.

Trump clashed with Silicon Valley on several issues during the campaign, including immigration, government surveillance and encryption, and his victory last month alarmed many companies who feared he might follow through on his pledges.

Those concerns have not been assuaged in recent weeks, as Trump has said he intends to nominate individuals to senior posts in his administration who favor expanding surveillance programs.

The Trump transition team did not respond to a request for comment regarding the open letter.