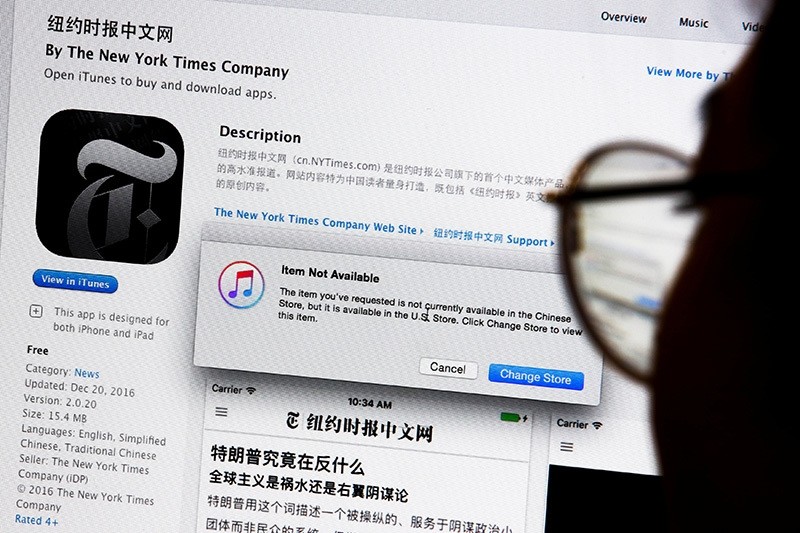 An illustration shows a person looking at a computer screen in Beijing showing anu00a0Appleu00a0iTunes store message saying that theu00a0Newu00a0Yorku00a0Timesu00a0app is not available in the Chinese store, China, Jan. 5, 2017. (Reuters Photo)
by reuters
Jan 05, 2017 12:00 am

Apple Inc (AAPL.O) has removed the New York Times Co's (NYT.N) news apps from its app store in China, following a request from the Chinese authorities.

Apple removed both the English-language and Chinese-language apps from the iTunes store in China on Dec. 23, according to the New York Times, which first reported the action.

"The request by the Chinese authorities to remove our apps is part of their wider attempt to prevent readers in China from accessing independent news coverage by The New York Times of that country," the New York Times spokeswoman Eileen Murphy told Reuters.

"We have asked Apple to reconsider their decision," Murphy said.

The Chinese government began blocking The Times's websites in 2012, after a series of articles on the wealth amassed by the family of Wen Jiabao, who was then prime minister, according to the New York Times report.

"We have been informed that the app is in violation of local regulations," Fred Sainz, an Apple spokesman told Reuters.

Apps from other international publications, including The Financial Times and The Wall Street Journal, were still available in the app store, the New York Times reported.