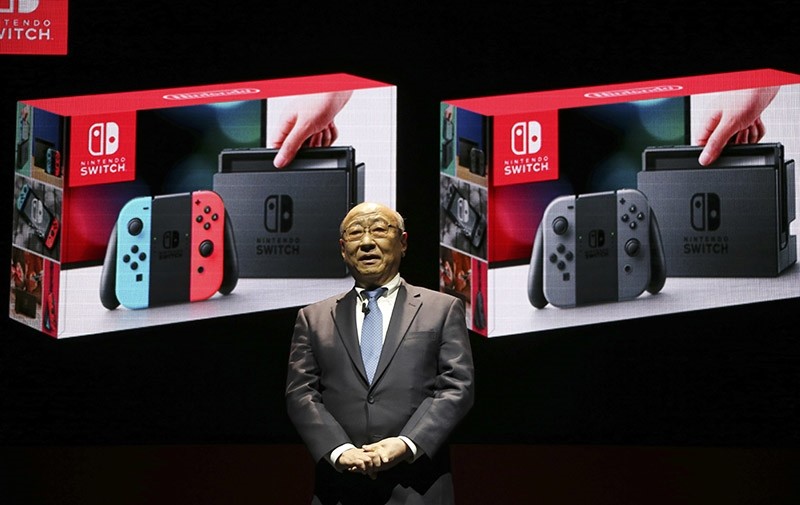 President of Nintendo Tatsumi Kimishima speaks during a presentation event of the new Nintendo Switch in Tokyo, Friday, Jan. 13, 2017. (AP Photo)
by Associated Press Jan 13, 2017 12:00 am

The Nintendo Switch video game console will sell for 29,980 yen (about $260) in Japan, starting March 3, the same date as its global rollout in the U.S. and Europe. The Japanese company promises the device will be packed with fun features of all its past machines and more.

The Kyoto-based maker of Super Mario and Pokemon games announced details of the Switch's release Friday at the Tokyo Big Sight events hall. It said the console will sell for $299.99 in the U.S. Customers in Europe would need to ask retailers there for prices.

Anticipation has been mounting. In teaser videos, Nintendo Co. has shown players using a handheld whose remote controller section detaches from the left and right sides of the main part of the device's display. Players can use the Switch as a regular handheld, put the display on a table, or use a TV screen as a monitor.

Nintendo needs the Switch to help it recover from disappointing sales from the Wii U and the 3DS handheld. Nintendo has been playing catch-up after consumers dumped older machines in favor of using smartphones and personal computers to play games. The company also faces powerful rival game machine offerings from Microsoft Corp. and Sony Corp.

The Switch needs to win over new, younger players, who may not be hard-core game fans and might be daunted by its hefty price tag. Many had hoped it might sell for closer to $200.

Nintendo is promising a more immersive, interactive experience with the Switch, including online playing and using the remote controller in games that don't require players to be constantly staring at a display.

In another game, characters' arms swirled out during combat when players punched the air while holding the controllers.

"It's a totally new kind of game," said Kouichi Kawamoto, who oversaw "1-2-Switch," a gun-duel game that requires players to look each other in the eye. "It's about having fun with communication."

Nintendo said 50 software makers, including Electronic Arts and Sega, are preparing 80 games for the Switch. It also promised in-house games such as a Legend of Zelda game, which will go on sale the same date as the Switch.

The company planned a similar presentation in the U.S. later Friday. It's also setting up places where people can try the device ahead of its launch, including cities in Europe, to woo buyers.