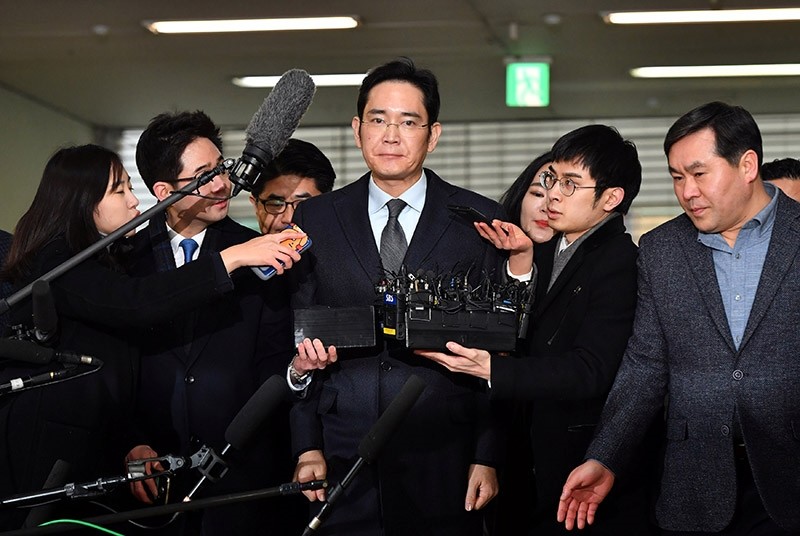 Lee Jae-yong (C), vice chairman of Samsung Electronics, arrives to be questioned as a suspect in a corruption scandal at the office of the independent counsel in Seoul on February 13, 2017. (Reuters Photo)
by Compiled from Wire Services Feb 13, 2017 12:00 am

The South Korean special prosecutor's office said on Monday it will decide whether to seek arrest warrants for more Samsung Group executives amid a widening influence-peddling scandal that could topple President Park Geun-hye.

Special prosecution spokesman Lee Kyu-chul told reporters four executives other than Jay Y. Lee, head of South Korea's top conglomerate, have been identified as suspects and a decision on whether to seek their arrest would be made after questioning.

Prosecutors had previously said they would not seek arrests for any Samsung officials other than Lee, who is being questioned for the second time on suspicions that he pledged 43 billion won ($37.30 million) to a business and organizations backed by Park's friend, Choi Soon-sil, in exchange for support for a 2015 merger of two Samsung units.

Samsung is suspected of providing tens of millions of dollars in money and favors to President Park Geun-hye and her jailed friend Choi Soon-sil in exchange for government support of a merger deal between two Samsung affiliates in 2015.

The merger helped Lee, the billionaire vice chairman of technology giant Samsung Electronics, promote a father-to-son transfer of leadership and wealth at the group.

The bribery allegation surfaced as authorities expanded investigations into a political scandal that led to Park's parliamentary impeachment. Prosecutors accuse Park of letting Choi pull government strings from the shadows and extort money from Samsung and other big companies.

Prosecutors planned to question Lee over new findings they made in the past few weeks and may consider requesting an arrest warrant for him again, according to prosecution spokesman Lee Kyu-chul. While entering a prosecution office, Lee Jae-yong told reporters that he will faithfully undergo questioning.

Prosecutors had sought to arrest Lee when they summoned him last month, but the Seoul Central District Court ruled there wasn't enough evidence to justify Lee's arrest at that point.