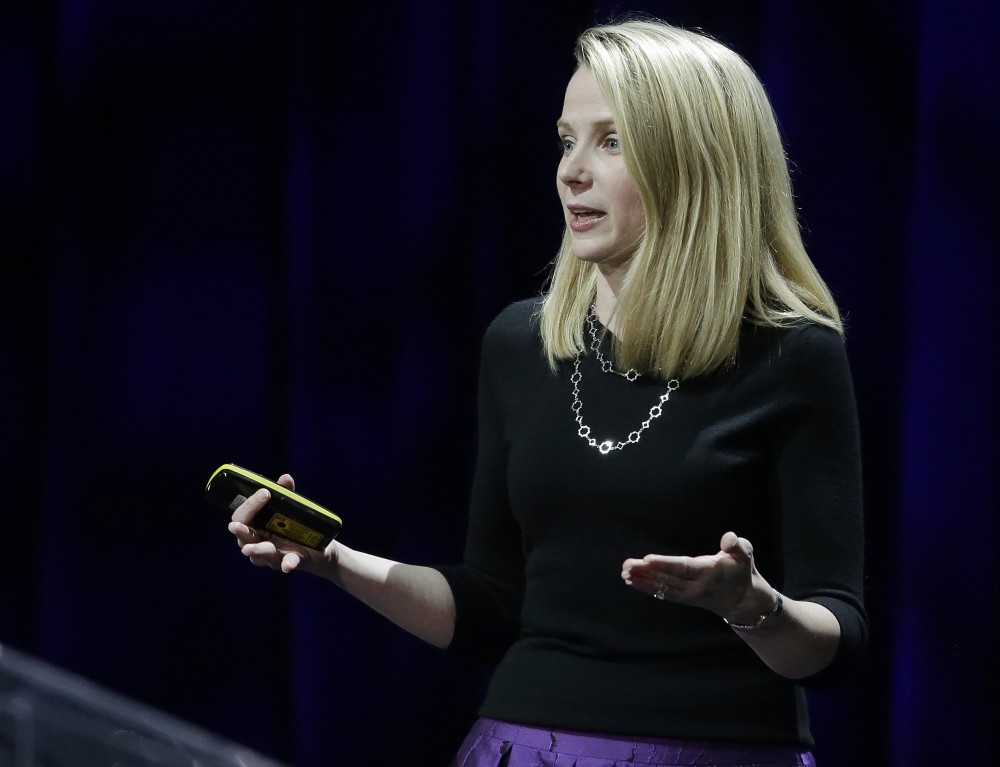 Yahoo President and CEO Marissa Mayer delivers the keynote address at the first-ever Yahoo Mobile Developer Conference, in San Francisco.
by Associated Press Mar 03, 2017 12:00 am
Yahoo is punishing CEO Marissa Mayer and parting ways with its top lawyer for the mishandling of two security breaches that exposed the personal information of more than 1 billion users and already have cost the company $350 million.

Mayer won't be paid her annual bonus nor receive a potentially lucrative stock award because a Yahoo investigation concluded her management team reacted too slowly to one breach discovered in 2014. Yahoo's general counsel, Ronald Bell, resigned without severance pay for his department's lackadaisical response to the security lapses.

Alex Stamos, Yahoo's top security officer at the time of the 2014 breach, left the company in 2015. Although Yahoo's security team uncovered evidence that a hacker backed by an unnamed foreign government had pried into user accounts in 2014, executives "failed to act sufficiently" on that knowledge, according to the results of an internal investigation disclosed Wednesday. At that time, Yahoo only notified 26 people that their accounts had been breached.

The report didn't identify the negligent executives, but it chastised the company's legal department for not looking more deeply into the 2014 breach. Because of that, the incident "was not properly investigated and analyzed at the time," the report concluded.

Yahoo didn't disclose the 2014 breach until last September when it began notifying at least 500 million users that their email addresses, birth dates, answers to security questions, and other personal information may have been stolen. Three months later, Yahoo revealed it had uncovered a separate hack in 2013 affecting about 1 billion accounts, including some that were also hit in 2014.

The breaches, the two biggest in internet history, have already exacted a major toll. Yahoo already lowered the sales price of its email and other digital services to Verizon Communications from $4.83 billion to $4.48 billion to account for the potential backlash from the breaches. That deal was reached last July, two months before Verizon and the rest of the world learned about Yahoo's lax security. More than 40 lawsuits also have been filed seeking damages for the breaches. If Yahoo's sale to Verizon is completed as expected later this year, a successor company called Altaba Inc. will be responsible for paying those legal claims.
RELATED TOPICS