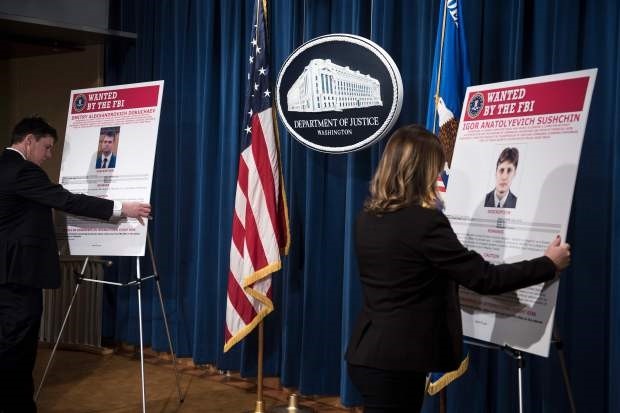 Staff members reveal wanted posters for two of three Russians charged with the 2014 hack of Yahoo before a press conference at the US Department of Justice in Washington, DC.
by Mar 17, 2017 12:00 am

U.S. charges that Russia's FSB security service was behind the hacking of Yahoo underscored a worrisome run of successes in Moscow's cyber-efforts against its longtime rival. Coming after Russian President Vladimir Putin allegedly masterminded an effort to shape the U.S. presidential election last year, the accusations add to concerns that the Kremlin is besting Washington on multiple fronts, from international conflict zones to domestic politics and the economy. They could also make it harder for U.S. President Donald Trump to achieve his stated hope of smoothing relations with Moscow, amid ongoing probes into links between his campaign advisers and Moscow. The U.S. Justice Department on Wednesday indicted two officials of Russia's Federal Security Service, the FSB, and two criminal hackers they hired to steal data from some 500 million Yahoo user accounts. They used that information to break into the accounts of Russian and U.S. officials, Russian journalists and politicians, and business officials from multiple countries.

It was the first time Washington laid criminal charges against Russian officials for cyber-related offenses, aiming to send a message to Moscow to stop making use of the criminal underworld for espionage.

But experts say that will probably not happen. "The Russians have done really well, and most people would say that they have the upper hand, they have the initiative," said James Lewis of the Center for Strategic and International Studies in Washington.

"There is no chance of them giving this up. Why would they do it?"

Much of Washington has become consumed by a Cold War-like fear of Russia's tactical moves, focusing on whether Moscow may have compromised people close to Trump. The U.S. Federal Bureau of Investigation and multiple committees in Congress continue to investigate Russia's role in last year's election and its links to people associated with the Trump administration.

U.S. intelligence chiefs said in a report issued in January that their investigations showed Putin oversaw the effort that included hacking Democratic computers and communications and releasing embarrassing documents via WikiLeaks in order to hurt the campaign of Trump's rival Hillary Clinton.

U.S. businesses and the government have been targeted by many small and large-scale hacking attempts in recent years. In 2014, the Justice Department laid criminal charges against five members of China's military it said were systematically stealing U.S. corporate secrets. A year later, President Barack Obama pressed Chinese leader Xi Jinping to end the cyber theft, calling it beyond the accepted norms of spying. That has largely worked, analysts say. The security firm Fire Eye has documented a steep decline in Chinese-origin hacking attempts.

Many worry that Moscow is also behind WikiLeaks' publication of a trove of documents on the U.S. Central Intelligence Agency's own hacking program last week, which exposed secrets and embarrassed the U.S. spy agency. U.S. intelligence officials have branded WikiLeaks a Russian front since the election leaks. But no one knows who provided the anti-secrecy group with the CIA documents. "WikiLeaks works with insiders, it works with the Russians," Lewis said. "We don't know which it is in this case."
RELATED TOPICS