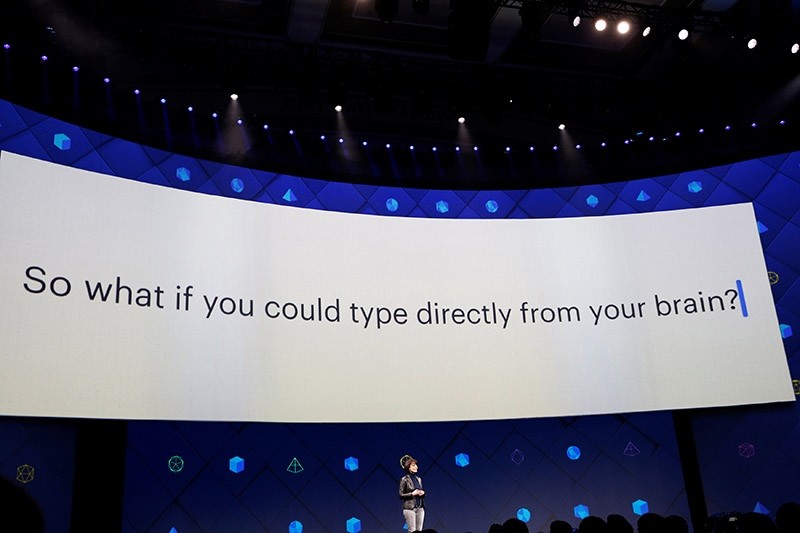 Regina Dugan, vice president of engineering of Building 8 at Facebook, speaks on stage during the second day of the annual Facebook F8 developers conference in San Jose, California, U.S., April 19, 2017. (Reuters Photo)
by Compiled from Wire Services Apr 20, 2017 12:00 am

Facebook Inc on Wednesday pulled aside the curtain on a secretive unit headed by a former chief of the Pentagon's research arm, disclosing that the social media company is studying ways for people to communicate by thought and touch.

Facebook launched the research shop, called Building 8, last year to conduct long-term work that might lead to hardware products. In charge of the unit is Regina Dugan, who led a similar group at Alphabet Inc's Google and was previously director of the U.S. Defense Department's Defense Advanced Research Projects Agency, or DARPA.

Dugan told software developers at Facebook's annual F8 conference that the company was modeling Building 8 after DARPA, a government office founded in the 1950s that gave the world the internet and the miniaturized GPS receivers used in consumer devices.

Any hardware rollouts are years away, Dugan said in a speech. Potential products could, if successful, be a way for Facebook to diversify beyond its heavy reliance on advertising revenue.

One example of Building 8's work so far, Dugan said, was an attempt to improve technology that allows people to type words using their minds.

"It sounds impossible, but it's closer than you may realize," Dugan said.

Using brain implants, people can already type eight words a minute, she said. Facebook's goal, working with researchers at several U.S. universities, is to make the system non-invasive, as well as fast enough so that people can type 100 words a minute just by thinking.

Video played during her presentation showed a woman with an advanced neurodegenerative disease using her mind to move a cursor on a computer screen, slowly typing words.

Such brain-computer interface technology currently involves implanting electrodes, but Facebook wants to use optical imaging to eliminate the need to surgically intrude on brains, according to Dugan.

Facebook is looking at creating "silent-speech interfaces" based on sensors that could be worn, and made in quantity.

"We are not talking about decoding your random thoughts; that is more than many of us want to know," Dugan quipped.

"We are talking about thoughts you want to share. Words you have decided to send to the speech center of the brain."

Such technology could let people fire off text messages or emails by thinking, instead of needing to interrupt what they are doing to use smartphone touchscreens, for example.

It would also have the potential to capture concepts and semantics associated with words people are thinking, making language differences irrelevant by enabling sharing of what is in mind, Dugan said.

"Unlike other approaches, ours will be focused on developing a noninvasive system that could one day become a speech prosthetic for people with communication disorders or a new means for input to AR," Dugan said in a post on her Facebook page, referring to augmented reality.

"Even something as simple as a 'yes/no' brain click, or a 'brain mouse' would be transformative."

The Building 8 group is also working on sensors that let people "hear" through their skin, with what they feel being converted into words in a variation on how the ear turns vibrations into comprehensible sounds.

"Our brains have the ability to construct language from components," Dugan said.

"I suggest that one day, not so far away, it may be possible for me to think in Mandarin and for you to feel it instantly in Spanish."

Such technology remains years away, according to Dugan.

Work under way in Building 8 "will one day allow us to choose to share a thought, just like we do with photos and videos," Facebook co-founder and chief executive Mark Zuckerberg said in a post on his page at the social network.

"Eventually, we want to turn it into a wearable technology that can be manufactured at scale."

Facebook started the Building 8 group last year, and put it in the hands of Dugan, who had previously led an advanced-technology projects group at Google.