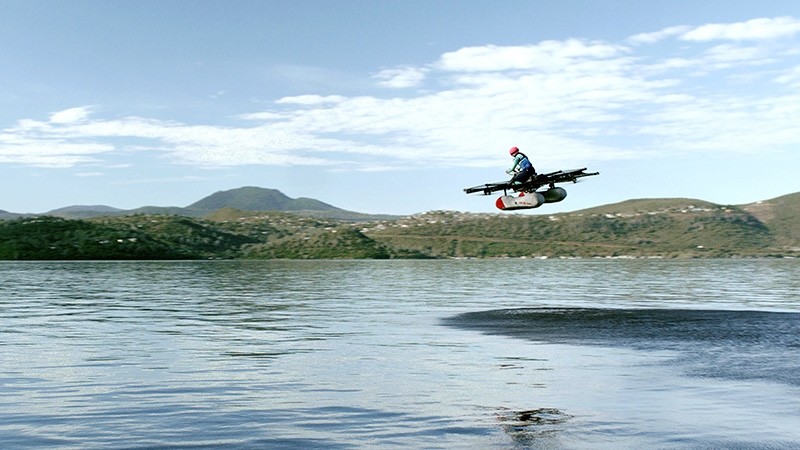 This undated image courtesy of the Kitty Hawk Corporation shows Cimeron Morrissey, an outdoor sports enthusiast and freelance writer, as she flies on the the Kitty Hawk Flyer prototype. (AFP Photo)
by Apr 25, 2017 12:00 am

"Our mission is to make the dream of personal flight a reality. We believe when everyone has access to personal flight, a new, limitless world of opportunity will open up to them," said a statement on the website of the Kitty Hawk company, based in Google's home town of Mountain View, California.

"Today we're announcing our first prototype of The Flyer, a personal flying machine that will become available for sale by the end of 2017."

The video showed the single-seat aircraft -- with two pontoons and a spider web-like platform -- taking off from a lake at an undisclosed location and hovering above the water, where it is meant to be used.

The craft, propelled by eight rotors, takes off and lands vertically, like a helicopter. It is said to weigh about 220 pounds (100 kilograms) and fly at speeds up to 25 miles per hour (40 kph). and can hover at 15 feet (4.5 meters) high.

The company describes the Flyer as "a new, all-electric aircraft," which is "safe, tested and legal to operate in the United States in uncongested areas" under US federal regulations for ultralight aircraft. No pilot's license is required, and two hours' training is said to be all that is needed.

The website offered few details about the company, but several reports in recent months have said Page has poured millions of dollars into Kitty Hawk and another electric car startup.

Kitty Hawk president Sebastian Thrun, a Stanford University computer science professor who has been called the father of Google's self-driving car, tweeted: "Changing the future of personal transportation. Join us @kittyhawkcorp to get information about #theFlyer prototype."

The company announced it was offering three-year "memberships" for $100 to be placed on a waiting list and to get a discount on the price of the new transporter. The price is to be announced later this year.

The startup offered only limited details about the company.

An email response to an AFP query said the lead engineers were Cameron Robertson and Todd Reichert, who created a startup called Aerovelo which aims to produce the fastest human-powered vehicle.

Kitty Hawk said the flyer going on sale later this year will have a different design than the prototype.

A blog post by writer Cimeron Morrissey, who took the flyer for a test run, offered some clues on how it feels.

"The prototype looks and feels a lot like a flying motorcycle. You mount the seat and lean forward, just like you would on a bike," she wrote.

"I feel light and ecstatic and utterly free. This is just like my flying dreams!"

Several other companies, including European conglomerate Airbus, have been working on similar flying machines.