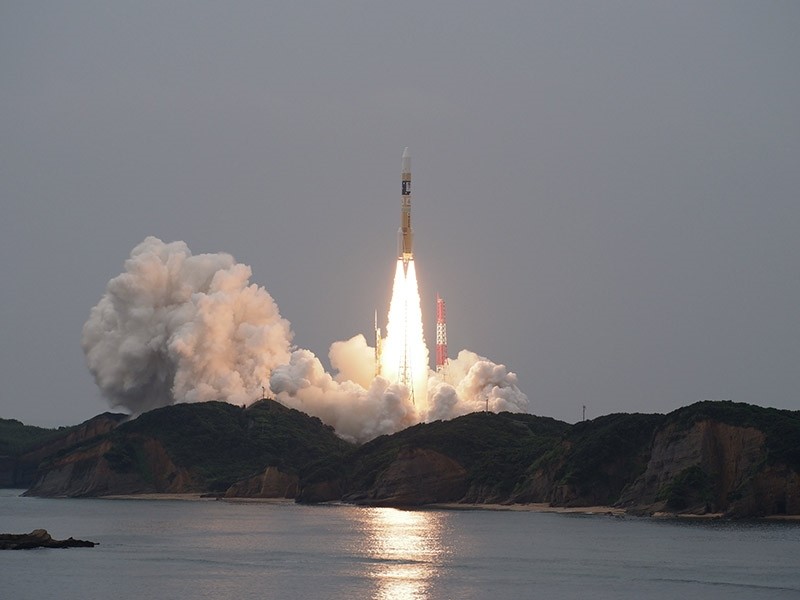 A handout photo made available by the Japan Aerospace Exploration Agency (JAXA) shows the launch of an H-IIA rocket with the Michibiki No. 2 satellite onboard from the Tanegashima space center in Kagoshima Prefecture, Japan, 01 June 2017. (EPA Photo)
by Compiled from Wire Services Jun 01, 2017 12:00 am

Japan launched a rocket carrying a satellite with a local version of the U.S. global positioning system (GPS) on Thursday, which is expected to increase the precision of location information used in smartphones and car navigation system.

An H-IIA rocket blasted off Thursday morning from the Tanegashima space center in southern Japan carrying the "Michibiki" No.2 satellite, which was later released into orbit.

"The launch was a success," a Cabinet Office spokeswoman said.

The nation launched the first Michibiki satellite into space in 2010 on a trial basis and it plans to send two more satellites later this year, according to the Cabinet Office.

Once the four satellites are in orbit, at least one satellite will be flying over Japan for eight hours per day.

Though GPS is widely used in Japan, having supplementary satellites is important in a country where mountainous terrain and high buildings may interfere with its signals.

Michibiki, meaning guidance in Japanese, can cover the Asia-Oceania region and is intended for civilian use.

Combining with the U.S. GPS and the Japanese system will enhance the stability of receiving radio waves and increase the precision of position information.

The U.S. GPS has a margin of error of about 10 metres (about 33 feet) but together with the Japanese system positioning error will be reduced to only several centimetres (a few inches).

The system is expected to be used for such activities as driverless tractors in farming and to help develop automated construction machines.

By fiscal 2023 the government plans to have launched a total of seven satellites into orbit and secure Japan's own GPS system without depending on the U.S. system.