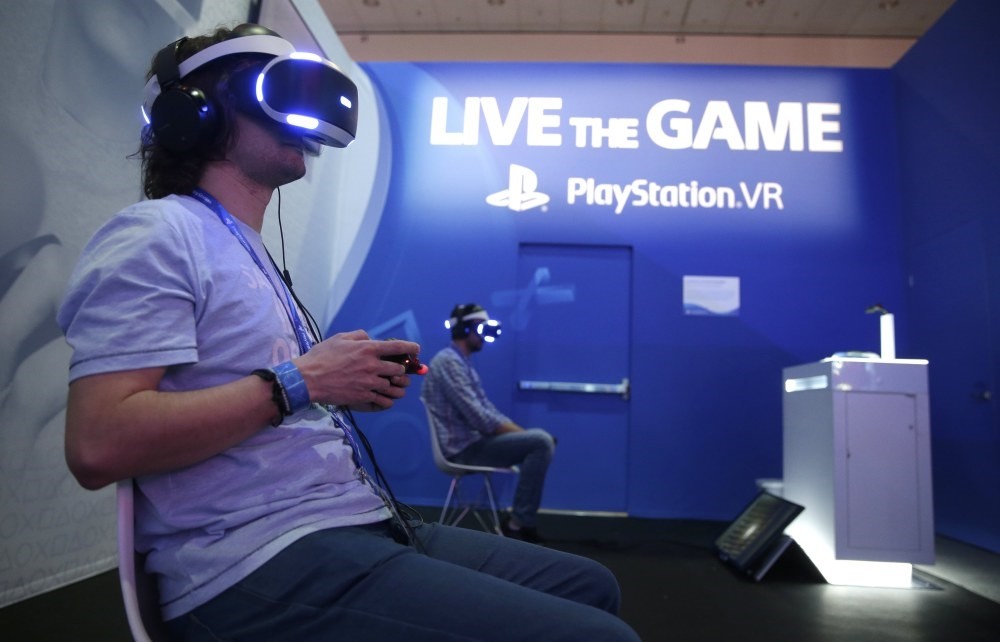 Gamers play the PlayStation virtual reality game The Inpatient on the opening day of E3 (Electronic Entertainment Expo) in Los Angeles.
by Jun 16, 2017 12:00 am

With new virtual reality systems, gamers will be going toe-to-toe with demons in new offerings unveiled at the Electronic Entertainment Expo this week. Play on consoles or Windows-powered personal computers continued to dominate the annual industry gathering

Zombies from the television series "The Walking Dead" and other demons are coming to life for video gamers in virtual worlds. With new virtual reality systems, gamers will be climbing into colossal war machines to battle high-tech armies, wandering mutant-infested post-apocalyptic wastelands and going toe-to-toe with demons in new offerings unveiled at the Electronic Entertainment Expo this week. While play on consoles or Windows-powered personal computers continued to dominate the annual industry gathering, virtual reality flourished as game makers invested in the future. The number of E3 exhibitors involved with virtual or augmented realities more than doubled to 126 from 53 last year, according to the Entertainment Software Association behind the event.

"This by far, is the most exciting E3 as it comes to virtual reality," said YouTube director of gaming Ryan Wyatt.

Virtual reality versions of blockbuster video games "Fallout," "Doom," and "Skyrim" were part of a lineup unveiled by Bethesda Softworks.

"Virtual reality is something we have been at the forefront of for a while now," said Bethesda vice president of marketing Pete Hines.

Later this year, shooter game "Doom" will "bathe you in virtual carnage" as a cybernetic survivor fighting off a demon invasion. A VR version of "Fallout" will put players into a world destroyed by nuclear war, while they will face dragons in a full-length, open-world version of "Skyrim," according to Bethesda. Sony built on its library of games for its PlayStation VR gear, which works with top-selling PlayStation 4 consoles. More than a million PS VR units have been sold, along with some 5.25 million VR games. Along with games, Sony is working on a VR "experience" spinning off the television series "Breaking Bad" in a partnership with producer Vince Gilligan. Skybound Entertainment meanwhile announced it is collaborating on virtual reality games spinning off "The Walking Dead," the post-apocalyptic television series.

"Our goal is to honor the visceral world that (Robert) Kirkman has created while giving the Walking Dead's fans something to really sink their teeth into with robust games," Skydance media chief executive David Ellison and operating officer Jesse Sisgold said in a statement.

"Archangel" is to be released later this year.

"We decided to jump headfirst into the business of VR with 'Archangel' because we saw an emerging market and want Skydance to help write this story," Skydance Interactive president Peter Akemann told AFP. "We know we're only at the tip of the iceberg with what VR can ultimately deliver as a gaming medium but we believe wholeheartedly in its long term potential and are investing in it as such."

Sony, HTC and Facebook-owned Oculus are the top players in virtual reality head gear, each striving to stake out territory in the budding market. And even though the VR audience is lean compared to the hundreds of millions of people with consoles or personal computers, game makers are prone to embracing new technologies and understand that compelling content can inspire consumers to follow suit.