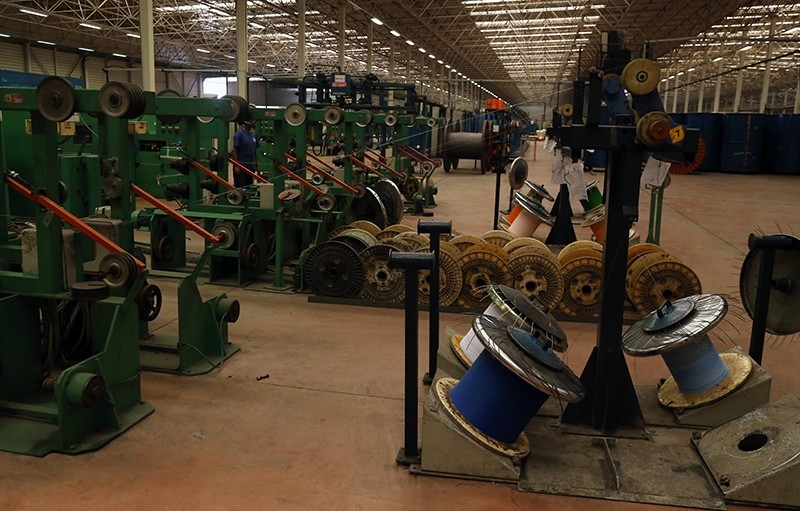 A leader in the manufacturing of multiple-use, high-voltage cables, Turkish company BMET says it is well positioned to surmount challenges and dominate the African markets.

Established in 2013, BMET's manufacturing plant is located in a spacious compound near the town of Sebeta, 25 kilometers (about 15 miles) west of Ethiopia's capital Addis Ababa.

"We are the biggest in Ethiopia and in Africa producing communications cables such as fiber optics and data cables as well as energy cables that are high voltage, insulated and ready-to-use," BMET's deputy general manager Fatih Tazecioğlu tells Anadolu Agency.

"The total investment we made until now is roughly $150 million," he says about the two-tier production line that integrated, in a closed area of 75,000 square meters (about 18.5 acres), the casting of aluminum and copper in addition to a carpentry shop.

Now, BMET's customers in Ethiopia include the national monopoly Ethio Telecom and the Ethiopian Electric Power Corporation as well as markets in Kenya, Djibouti, Sudan and Somaliland.

"We are expanding day by day. We are aiming for Uganda and we have some good news from Nigeria. Our aim is to go also to the Middle East," he says.

He adds that BMET has chosen Ethiopia to host its manufacturing hub, due to machinery import incentives, tax holidays and lower labor costs.

Tazecioğlu attributes the company's success to its diversity of production.

"We produce medium to high voltage cables and both energy and telecom cables while our competitors are either limited to producing low voltage or have only a single production line of energy cable," he says.

"[In terms of] fiber optic cables production, we face no such competitive challenge. The world demand is changing from copper communication cables to fiber optic cables. So we have that advantage in Africa," he says. "In the near future […] we want to reach all African countries because we already see that there is success with our cables in Kenya."

Even so, BMET in Ethiopia is not operating at full capacity due to shortages in raw materials.

The company's sales portfolio indicates average annual sales that range from $90 to $100 million in 2016, he adds. Though a significant increase compared to first-year performance in 2013, it accounts for half of what would be earned if the factory could operate on full capacity, according to Tazecioğlu.

To alleviate shortage of cooper -- in short supply in Ethiopia because the country has yet to start mining it; BMET therefore uses scraps bought from local sources -- which is one of the main inputs for production, the company hopes to explore and make use of the country's potential for the resource.

Deputy general manager at the BMET Ethiopia plant, Moges Feyera Bulti says: "We have already assessed and identified one potential area for copper resource at Hararghe and acquired 165 square kilometers [over 40,000 acres] for exploration."

While the prospect of the company to have its own copper ore is a matter to be determined by the ongoing prospecting work, Tazecioğlu says his company is currently hampered by a shortage in foreign currency and the high cost of transport.

BMET resumed operations after a halt in production a year ago due to political protests, during which demonstrators ransacked the premises of the manufacturing plant.

Last month, a group of Ethiopian parliamentarians paid a visit to the manufacturing plant to discuss reparations.

According to Tazecioğlu, the company has not received what it was expecting in compensation for damages.

Nevertheless, BMET appears poised to keep the site as its hub for manufacturing. BMET Ethiopia employs 700 employees, 650 of them Ethiopians.

"Ours is not just a manufacturing [outfit], but one that has been transferring knowledge to young Ethiopians," Tazecioğlu said.

Eskindir Yohannes is a machine operator at the plant and he tells Anadolu Agency that he has been working at the company for three years.

"The knowledge and skills I acquired from BMET are excellent and that makes me confident," he said.​

BMET was established in Kayseri in central Turkey in 2011.