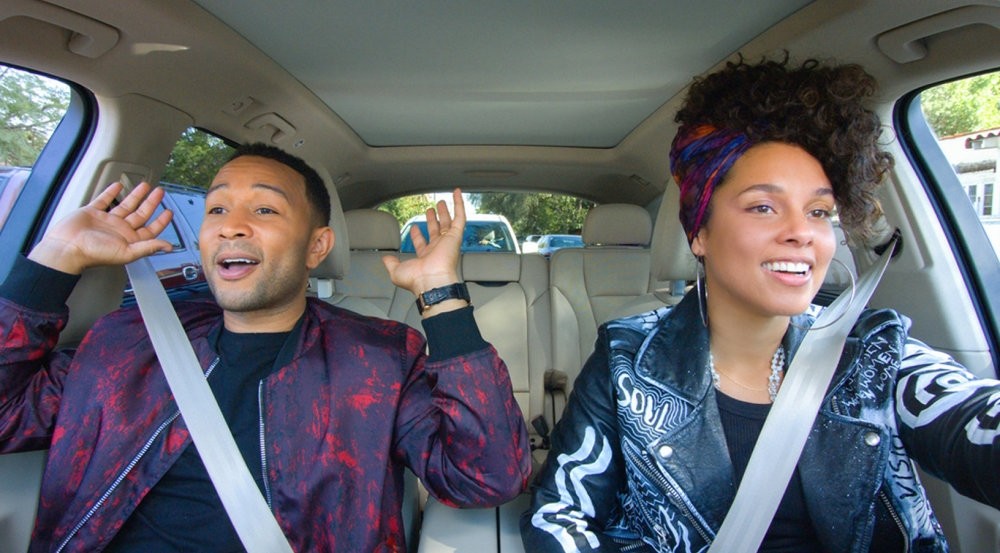 Recording artists John Legend (L) and Alicia Keys are shown during the taping of a new episode of Carpool Karaoke: The Series, available on Apple Music since Aug. 8.
by reuters Aug 19, 2017 12:00 am

A report that the iPhone maker could spend a billion dollars on its own shows suggested more disruption for a sector seeing rapid changes. The move by Apple would challenge entrenched services such as Netflix, YouTube, and Amazon Prime

The potential move of Apple into streaming video could reshape an industry which is already feeling the impact from new players like Netflix. While Apple has not revealed any plans publicly, a report that the iPhone maker could spend a billion dollars on its own shows suggested more disruption for a sector seeing rapid changes. The move by deep-pocketed Apple would challenge entrenched services such as Netflix, YouTube, and Amazon Prime, which have been increasingly challenging the established media-entertainment world of Hollywood. Apple declined to comment on a Wall Street journal report on its billion-dollar budget for new content. Analysts consider original, exclusive content imperative for fielding a viable video streaming service, something that Apple has yet to do despite being early to market with an Apple TV set-top box linked to the internet.

"If Apple wants to stay relevant they have to go into the subscription streaming space, and that means original content," said Jackdaw Research chief analyst Jan Dawson. Analyst Paul Verna at eMarketer said video fits nicely into Apple's business strategy: "Content is a vital missing link that could help Apple complete a powerful ecosystem of programming, devices and services," he said. Global streaming television king Netflix is expected to spend about $7 billion this year on content, with slightly less than half of that money going to making its shows it can distribute how and where it wishes. Netflix recently ordered a new animated adult comedy from "The Simpsons" mastermind Matt Groening. The Silicon Valley-based company is also buying comic book publisher Millarworld, creator of popular series including "Kick-Ass" and "Kingsman."

Netflix said in a statement the deal was part of the company's effort "to work directly with prolific and skilled creators and to acquire intellectual property and ownership of stories featuring compelling characters and timeless, interwoven fictional worlds."

Netflix describes itself as the world's leading internet television network, with 104 million members in more than 190 countries. During a recent quarterly earnings call, Amazon executives once again vowed to ramp spending on original shows this year as the internet giant chases after Netflix with is Prime service. While Amazon doesn't reveal exact figures, its budget for shows is said to be in the billions of dollars.

Google continues to make a priority of content for YouTube, which features a subscription service along with free shared video posts. Facebook too is rolling out a new video service offering professionally produced shows in a challenge to rivals such as YouTube, and potentially to streaming providers like Netflix. The Facebook service called Watch will include a range of shows, from reality to comedy to live sports. Facebook has funded some of the creators to get the service going. These moves come as viewers in the U.S. and other markets increasingly turn to on-demand internet platforms instead of "linear" television. Hollywood powerhouse Walt Disney Co. this month announced plans to launch a "multi-sport" streaming service under its ESPN brand in early 2018 and a Disney branded direct-to-consumer service in 2019. HBO and CBS also have standalone streaming options.

Entering a market late and succeeding would be nothing new for Apple, Dawson said while discussing unconfirmed talk of the company investing in original shows. An Apple Music service launched in a streaming radio market with dominant players, but is now second only to Spotify, the analyst noted. Apple could get the same kind of results in streaming video, not overtaking Netflix over the short term but quickly becoming a force to be reconned with in the market, Dawson said. While Apple has about a quarter of a trillion dollars in cash stockpiled, providing ample cash to spend on original content, such a move could distract it from the devices on which the company's fortune rests, according to analyst Rob Enderle of Enderle Group. Entertainment is also a very different industry than making iPhones, and comes with film talent to manage and other challenges likely new to Apple, Enderle said.

"Entertainment is no cheap date; it is a very hands-on business," Enderle said.

"I think that because Apple is having so much difficulty coming up with innovation in their core area, they are starting to panic and come up with 'Hail Mary' passes in other areas."