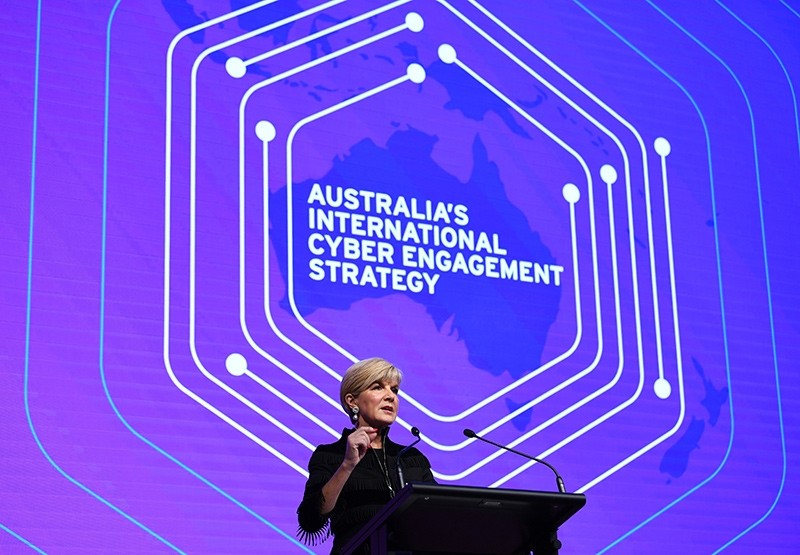 Australian Foreign Minister Julie Bishop gestures on stage during her speech at the launch of Australia's inaugural International Cyber Engagement Strategy at the Telstra Customer Insight Centre in Sydney, Australia, Oct. 4, 2017 (EPA Photo)
by Oct 10, 2017 12:00 am

An Australian defense contractor was hacked and a significant amount of data was stolen, the Australian government said Tuesday, adding that similar cyber-attacks and online scams had increased by 15 percent in the past year.

The cyber intruders had accessed the information technology network of an unnamed small company with contracting links to national security projects for an extended period of time before the Australian Cyber Security Centre found and helped end the attack in November, a minister said Tuesday.

Assistant Minister for Cyber Security Dan Tehan said it was unclear who launched the incursion, but the government was not ruling out a foreign government.

"Analysis showed that the malicious actor gained access to the victim's network by exploiting an internet or public-facing server, which they accessed using administrative credentials."

The minister also released the an annual cybersecurity report that identified 47,000 cyber incidents last year - a 15 percent increase compared to the same period the year before - more than half of which were internet scams or fraud.

Of that 7,283 were cyber security incidents affecting major Australian businesses.

"In terms of government, in 2016/17 our networks were regularly targeted by cybercriminals, issue-motivated groups and individuals, and nation states," he said, adding the country's signal intelligence had responded to 671 incidents warranting serious operational responses.