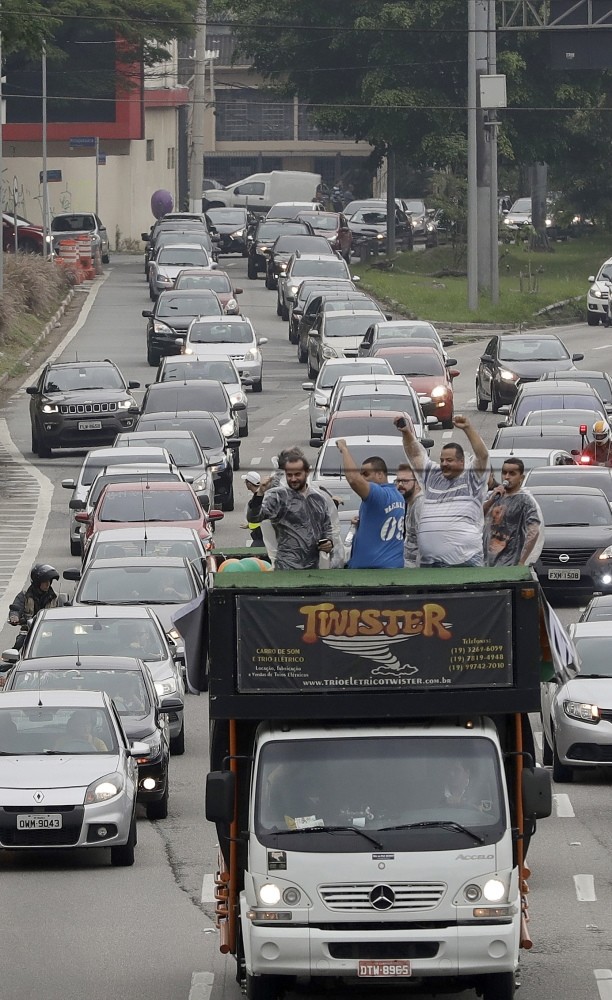 Uber drivers and other ride-sharing apps, protest against proposed regulation of those services by the Brazilian Senate.
by Associated Press
Nov 02, 2017 12:00 am

Thousands of drivers from Uber and cabbies faced off in Brazil's capital Tuesday as the Senate considered imposing new regulations that the ride-sharing app said would sink its business in its second-largest market worldwide. In the latest threat to Uber's global business, senators began debating a bill passed in April by Congress' lower house that would require municipal governments to regulate ride-sharing apps, including requiring insurance for carrying passengers and pension benefits for drivers. It also called for increased oversight of drivers and their cars. Hundreds of cabbies as well as drivers for Uber and other ride-sharing apps followed the session from the hallway, cheering those who spoke in favor of their positions. Some drivers called out the names of senators who disagreed with them and booed.

Outside, police used pepper spray and formed a human cordon to separate thousands more drivers from both sides who had been shouting at one another. Senate President Eunicio Oliveira said senators could not accept the legislation as written and were looking to find a compromise balancing the interests of the two types of drivers, one that "doesn't crush one and doesn't crush the other." If the Senate made amendments, the bill would go back to the Chamber of Deputies for further consideration. Congressman Carlos Zarattini, who wrote the bill, has acknowledged that it would likely end ride-sharing as it currently exists, but he and other lawmakers said the apps offer too little protection for their drivers. As written, the legislation would "strangle" ride-sharing apps without offering clear benefits to passengers or drivers, analyst Fabro Steibel said.

Uber drivers objected to a proposal that they own their cars, which would exclude the many drivers who rent, and another requirement that ride-sharing cars carry the same red license plates that taxis do. Other contentious points included a requirement that drivers get an authorization from the city in which they operate. That could mean drivers couldn't take passengers from Sao Paulo, for instance, to the city's international airport, which is in another municipality. Uber has called the changes a "covert ban" and said they would make business in Latin America's largest nation unviable. It launched a lobbying campaign against the bill, collecting the signatures of more than 800,000 Brazilians who say they oppose it. Uber has faced similar challenges in other countries. Last month, London's transport regulator stripped Uber of its license, though the company continues to operate while it appeals.