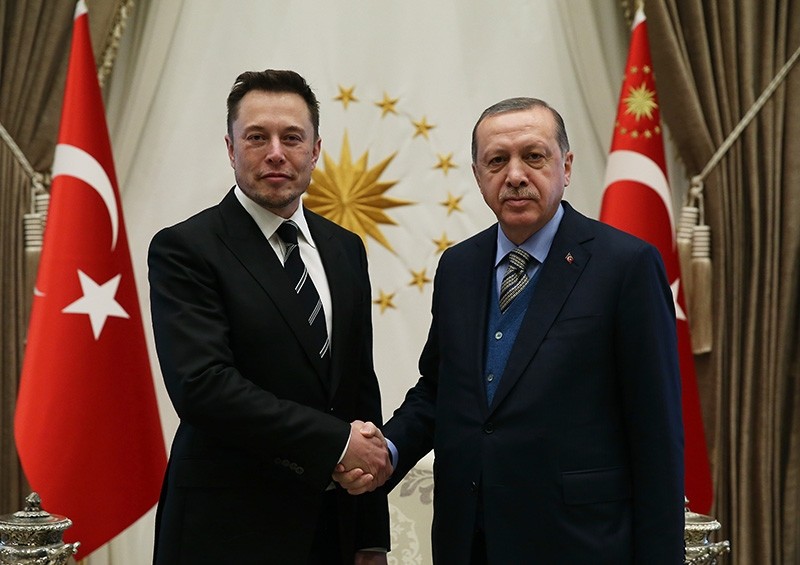 President Recep Tayyip Erdoğan met with Tesla CEO Elon Musk Wednesday, to discuss a number of topics, including an agreement with Airbus on TÜRKSAT 5A and 5B satellites, as well as technological developments in Turkey.

"We discussed technological investments in Turkey and recent developments that have been taking place in the country regarding the matter" Presidential Spokesperson İbrahim Kalın said.

He noted that an agreement is expected to be signed with Airbus regarding the satellite on Thursday, and Musk's SpaceX is one of the subcontractors of the company.

"We also exchanged ideas on what projects Tesla, SpaceX and Turkish tech corporations can cooperate on," the spokesperson added.

The meeting was held at the Presidential Complex in capital Ankara and was scheduled for 03:30 p.m. local time.

Minister of Transportation, Maritime Affairs and Communication Ahmet Arslan and Minister of Science, Industry and Technology Faruk Özlü were also present at the Erdoğan-Musk meeting.

No information has been released regarding the content of the meeting.

Erdoğan and Musk are expected to discuss Turkey's upcoming domestic automobile production and latest developments in the production of hybrid and electric vehicles.

He said that they could also lean toward producing hybrid and electric cars, indicating that regardless of the decision, they will provide all kinds of support as long as the Turkish nation is adequately equipped to realize its dream.

Elon Musk became a multimillionaire in his late 20s when he sold his startup company, Zip2, to a division of Compaq Computers. He made headlines in May 2012, when SpaceX launched a rocket that would send the first commercial vehicle to the International Space Station. He bolstered his portfolio with the purchase of SolarCity in 2016.

A company dedicated to producing affordable, mass-market electric cars, Tesla was founded in 2003 by a group of engineers who wanted to prove that electric vehicles can be better, quicker and more fun to drive than gasoline cars. Five years after its formation, the company in 2008 unveiled the Roadster, a sports car capable of accelerating from 0 to 60 mph in 3.7 seconds, as well traveling nearly 250 miles between charges of its lithium ion battery.

Additional successes include the Model S, the company's first electric sedan. Capable of covering 265 miles between charges, the Model S was honored as the 2013 Car of the Year by Motor Trend magazine. In 2015, Tesla expanded its product line with Model X, the safest, quickest and most capable sport utility vehicle in history that holds five-star safety ratings across every category from the National Highway Traffic Safety Administration. And to complete CEO Musk's "Secret Master Plan," in 2016, Tesla announced Model 3, a low-priced, high-volume electric vehicle that began production in 2017.

In April 2017, it was announced that Tesla had surpassed General Motors to become the most valuable U.S. carmaker. The news was an obvious boon to Tesla, which was looking to ramp up production and release its Model 3 sedan later that year. Today, the company builds not only all-electric vehicles but also infinitely scalable clean energy generation and storage products.

Musk has also been innovative in transportation with his hyperloop project, which is a mode of passenger and freight transportation. Ideally resistant to weather and powered by renewable energy, the hyperloop would propel riders in pods through a network of low-pressure tubes at speeds reaching higher than 700 mph.