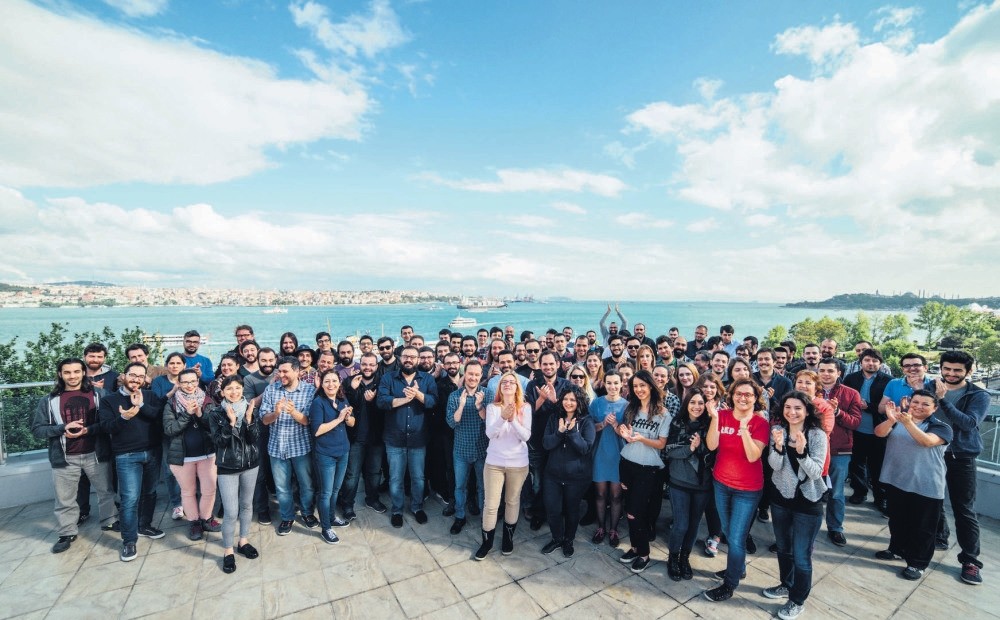 With the sale of its card games business to U.S. giant Zynga for $100 million, Turkish developer Peak Games transferred the biggest intellectual property rights for a single item in the country's history, and now, the company is looking to join the big league in the global gaming market

Established just seven years ago, Peak Games recently made a historic contribution of $100 million to Turkey's exports when it sold its card games business to the U.S. mobile gaming giant, Zynga.

Founded by Sidar Şahin in 2010, the Turkish game developer is known for its card games franchises and local hits like the 101 Okey Plus. It receives 99 percent of its income from Europe and the U.S.

The deal with Zynga meant that Peak Games will be transferring the biggest and most expensive intellectual property rights for a single item in Turkey's history. The move will also bring a substantial amount of foreign investments to the country.

Prior to the deal, Peak Games set another example when it sued and won an intellectual property rights lawsuit against Hasbro.

European investor spots opportunityFounded by Sidar Şahin, Rina Onur and Hakan Baş in 2010, Peak Games quickly made a name for itself with its free mobile and online games. Having received support from Humming Bird and Eurobird angel investors, the company continued to grow in Europe and especially in the U.S.Speaking to Daily Sabah about the Zynga deal, Peak Games Strategy Director Ömer İnönü said they reached this point after seven years of hard work, adding that the agreement involved only the acquisition of the studio that developed card and okey games, like "Spades Plus" and "Gin Rummy Plus," two of the most popular card games in the U.S., as well as games local hits like the "101 Okey Plus."

İnönü said Peak Games will continue to grow uninterruptedly with the teams developed other hits like Toy Blast and Toon Blast, played by tens of millions of people all over the world.

Company eyes world marketHe claimed that Peak Games was the fastest growing Turkish technology company and pointed out that it was one of the biggest players in the global mobile gaming market.

"Our commitment to work is one of the greatest drivers behind the company's success," İnönü said, adding that Peak Games was one of the top 10 companies in the U.S. mobile gaming scene, in terms of both revenue and number of users.

"Nevertheless, this is just the beginning and we hope of going much farther. One of our goals is to become the world's leading mobile gaming company," he said.

"Alongside technological expertise of our team, we have the power and ability to accomplish this."

Among the top 10 games played in the US

Peak Games' "Toy Blast" is among the top-10 mobile games in the U.S. at the moment, the world's largest gaming market. Another title, "Toon Blast," which was launched last August, is the most downloaded game in the U.S. with 3 million new users each month.

More than 500 million people worldwide have at least one of Peak Games' titles on their mobile devices.

They rank in the top-10 in the U.S. mobile gaming market.

Sidar Şahin gave life to Peak Games in 2010Peak Games was founded by Sidar Şahin in 2010. Currently, he serves as the company's CEO. Its co-founder, Rina Onur, later founded 500 Startups Istanbul, one of the world's largest entrepreneurial ecosystem accelerators.

The inauguration event will address a number of issues like: equal participation of women in economic life, designing training models that contribute to women and girls' access to education, quality of education and gender equality, and ensuring women's health and well-being in a physical, social and spiritual manner.

The event will highlight the entrepreneurs' willingness to back women's issues and their solutions. It will also look to raise awareness on a number of issues and will be participated by specialists, academicians, nongovernmental organizations, private sector employees, and entrepreneurs.

The application process for the Second Support Program period will end on Dec. 28. The platform helps social enterprises that develop products, services, and systems, likely to contribute to the solution of social issues through support programs. It also picks teams from among applicants and provides them with mentoring, work field, grant, education, access to the ecosystem and institutional cooperation.

Three finalists, picked at the end of the pre-incubation period are then allowed to enter the incubation period and establish social enterprises by turning their ideas into a business model with a grant of TL 120,000.

Project owners and entrepreneurs who design products, services, and systems to empower women and girls can visit imece.com for more detail.

The İmece innovation platform was founded in partnership between ATÖLYE, Zorlu Holding, and the S360, which specializes in the fields of sustainability.