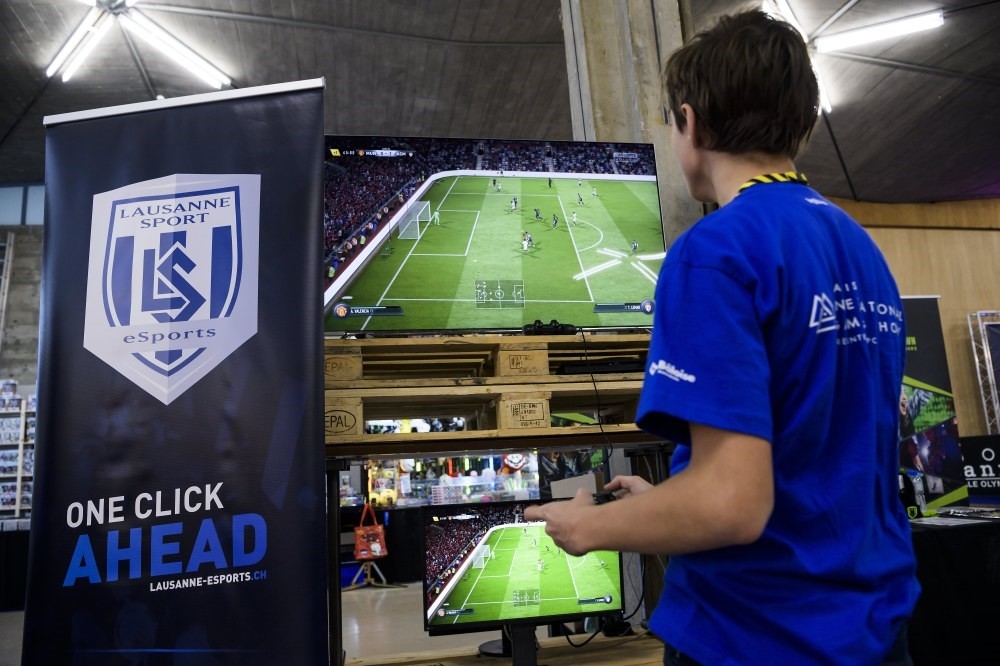 A man plays a virtual soccer game at the International Gaming Show in Lausanne. The show unites video games and eSports.
by Dec 01, 2017 12:00 am

The booming eSports industry may not yet attract the sponsors and TV rights of real life sports, but Alibaba believes it is only a matter of time before its bet on competitive video gaming comes up big

Chinese e-commerce conglomerate Alibaba's sports arm Alisports was opened in 2015 with the aim of cashing in on the rapidly growing world of electronic sports, where players square off in lucrative video game tournaments that draw millions of viewers online.

"We are prepared to lose money. We can accept the losses now as we hope to promote this sport," Alisports CEO Zhang Dazhong told AFP in an interview at the European final of the second edition of Alisports' World Electronic Sports Games (WESG) in Barcelona, which wrapped up on Sunday.

"For a sport that has a lot of participation, it must have a bright future. Even if for now you don't make a lot of money, in the future, you'll definitely be rewarded. This is something we firmly believe in."

In 2016, Alisports entered into an agreement with the International e-Sports Federation (IeSF) to create the WESG, a market-leading international tournament. The first edition of the WESG saw 63,000 participants from 125 countries battle for a share of the $5.5 million prize pot. Yet the results weren't so lucrative for Alisports, who lost 70 percent of their investment. "We estimate that we will be losing money for the next five years," admitted Zhang.

Alisports' strategy, though, is a long-term one. "We estimate that in five to 10 years...the business model will be more complete. On top of the competitions, we have to bear in mind the electronics business and marketing related to eSports," added Zhang. Participation in eSports has soared as virtual games gain traction with a worldwide fan audience now estimated at 400 million people according to a study by Deloitte, more than that for baseball or American football's National Football League. The size of the eSports market will more than double to $696 million this year from $325 million in 2015, according to Deloitte's study. It predicts the market will be worth $1.5 billion in 2020. But the market is fragmented, with different operators staging their own tournaments, and sales of television rights and merchandising remain weak. An eSport fan brings only three euros to the table annually on average, according to a recent study by market research group Nielsen Sports, compared to 30 euros for a football fan. Yet, Alibaba believes its position as the market leader in China, the worldwide powerhouse of eSports, ensures the return on eSports will be plentiful.

"In China we have 1.8 million eSport fanatics and 65 percent of those are between 18 and 25," continued Zhang. "They play video games, but they also buy all sorts of products from Alibaba. We understand them very well."

The leap in popularity has helped fuel talk that professional gaming could become an Olympic discipline, but not everyone is convinced.

"I think we have to differentiate eSports and gaming in general," Zhang said when he was asked about the controversy.

"Gaming of course isn't a sport, but eSports involve high-level confrontation, teams, individual resistance, so I think it's a sport. And I think that sport in general is evolving towards a combination of technology and physical activity." Zhang said he hopes eSports will be part of the 2024 Olympics in Paris or the 2028 Olympics in Los Angeles.