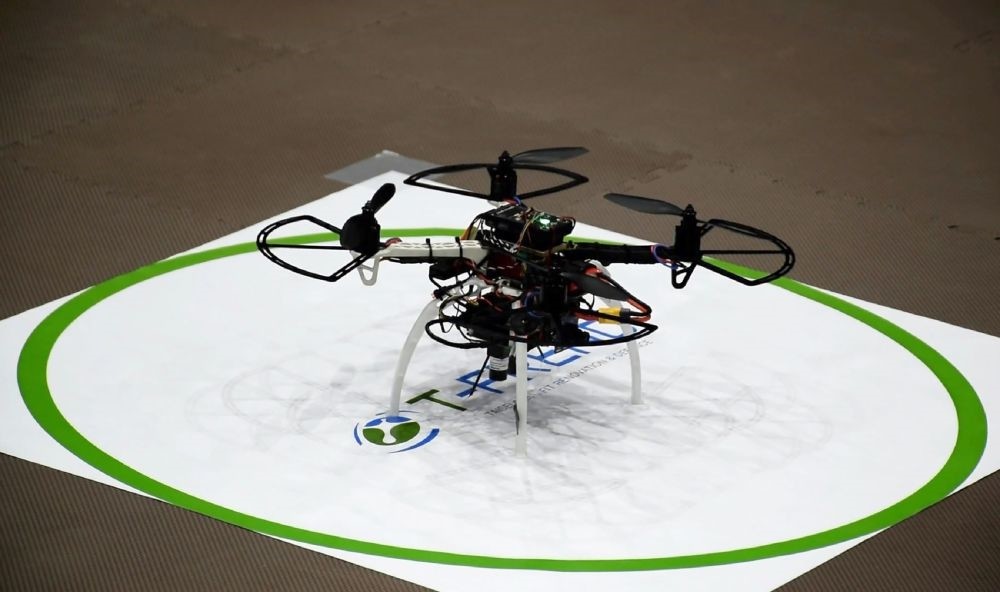 A T-Frend indoor drone inside an office in Tokyo. The T-Frend that hovers over Japanese employees and blares music at them to force them to go home was unveiled yesterday.
by Dec 08, 2017 12:00 am

As workaholic Japan has unveiled its first-ever plan to limit overtime in April, a building maintenance company will be making use of an 'T-Frend' an ingenious service that offers the industry's first indoor drone that tracks overworking employees. T-Frend buzzes over those trying to work late, blasting out the strains of "Auld Lang Syne," a Scottish tune typically used in Japan to announce that a store is closing.

"You can't really work when you think 'it's coming over any time now' and hear 'Auld Lang Syne' along with the buzz," said Norihiro Kato, a director at Taisei, an office security and cleaning firm that co-developed the system. The drone is equipped with a camera that stores footage on an SD card. Office scenes can also be monitored almost in real time from a remote location.

The machine recognizes its location on a building floor without GPS. It takes off from its port, makes a surveillance flight on a pre-set path and then returns autonomously. Taisei plans to start the T-Frend service in April in collaboration with drone system developer Blue Innovation and telecoms operator NTT East. The fee for the service is yet to be officially set, but "the target price" is around 50,000 yen ($450) a month, said Kato.

T-Frend's developers are also studying the possibility of giving the drone facial recognition technology to tell who is in the office after hours or whether there is an intruder. Administrative officials at many companies push overtimers out of the door, but this has ironically resulted in these officials working overtime themselves, to say nothing of "causing friction between employees," the companies said in a statement. Firms have therefore turned to security companies for this task, but they have struggled to provide enough staff given a nationwide labor shortage in Japan. T-Frend therefore serves the twin function of reducing overtime and making up for this labor shortage, the firms claimed.

Japan's government has been trying to change a culture in which working long hours is perceived as proof of loyalty and dedication. Every year in Japan, long working hours are blamed for dozens of deaths due to strokes, heart attacks and suicides. In February, the country launched the "Premium Friday" program, urging employees to knock off early on the last Friday of the month to reduce work hours and invigorate spending. But the plan fell flat with many claiming the last Friday of the month is one of their busiest days.

In May, the Japanese government for the first time released a nationwide list of over 300 companies that have violated labour laws, hoping this name-and-shame tactic would help eliminate abuses and prevent "karoshi."

In the list published this week on the labour ministry's website, major companies such as advertising agency Dentsu Inc and electronics maker Panasonic Corp are named for illegal overtime, and a local unit of Japan Post, a subsidiary of Japan Post Holdings Co, is mentioned for failing to report a work-related injury. Abuses such as illegal overwork have become so common in Japan in the past decade that such companies have been dubbed "black" companies in the media. Public outrage over long working hours and the suicide of a young worker at Dentsu in 2015, later ruled by the government as karoshi, have pushed Prime Minister Shinzo Abe to make labour reform a key policy plank.