Tech titans ramp up tools to win over children

From smartphone messaging tailored for tikes to computers for classrooms, technology titans are weaving their way into childhoods to form lifelong bonds, raising hackles of advocacy groups. The debut this month in the U.S. of a version of Messenger mobile application for children younger than 12 marked the first time leading online social network Facebook has stepped into the sensitive market. California-based Facebook said Messenger Kids complies with regulations protecting children online, and offers more safeguards for youngsters. 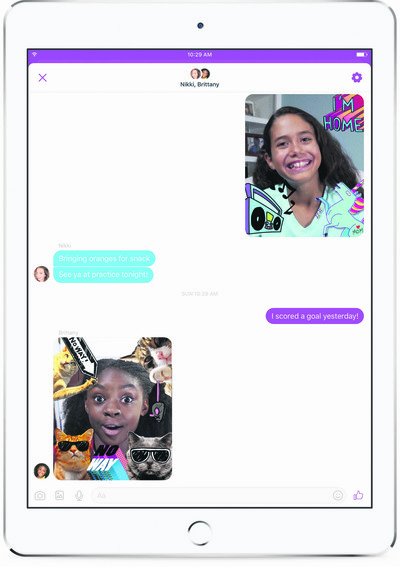 Facebook said the new app, with no ads or in-app purchases, is aimed at 6- to 12-year-olds and does not allow children to connect with anyone their parent does not approve. Messenger Kids is being rolled out for Apple iOS mobile devices in the United States on a test basis as a standalone video chat and messaging app. Product manager Loren Cheng said the social network leader is offering Messenger Kids because "there's a need for a messaging app that lets kids connect with people they love but also has the level of control parents want."

"Ideally, young children should not really be subjected to this kind of environment," said executive director Jeff Chester of the Center for Digital Democracy, a consumer protection group.

"(Messenger Kids) is the best we can do at the moment. The pressure on parents to let their children be on these services is so strong." Facebook, meanwhile, is motivated to increase the ranks of people using its offerings and get a new generation in the habit of using the social network. John Simpson of the activist group Consumer Watchdog argued a need for academic studies into how the use of technology affects children.

"Tech companies are not doing this out of generosity and kindness of the heart, they're doing it so they will build potentially loyal customers in the future," Simpson said. Two US senators wrote Thursday to Facebook with concerns about how children's personal data might be collected or used in Messenger Kids.

With Messenger Kids, Facebook gets children to spend time on the internet and social networks, said David Monahan of the Campaign for a Commercial-Free Childhood. He saw similar approaches from other tech giants, such as Google, which has spent years getting U.S. schools to use its Chromebook devices for connecting to cloud-based content and services. A Google for Education website aimed Chromebooks directly at classrooms, touting the devices as low-priced and easy to use.

Chromebooks have become the most prevalent computing hardware in U.S. schools, despite Apple starting years earlier in aiming its Macintosh machines at education. Selling computers to schools at attractive prices, aimed at high-volume deals and becoming part of people' lives at early ages, is not new. Apple, Microsoft, and HP have a history of it. But, Google has triumphed on this ground to the extent that the New York Times referred to the accomplishment in coverage as the "Googlification of Classrooms." Since Chromebooks act as portals to computing power and applications hosted online, Google gets the benefit of having students use its software for classwork, messaging and other services powered by the internet cloud. Google charges a one-time $30 licensing fee per Chromebook, and claims that more than 20 million students use its devices in schools around the world.

This has the potential of getting children, from a very young age, of "thinking about Google as a partner of the school" and, since it has the stamp of approval from educators believing it "must be a good product," Monahan said. Advocacy groups are also keen for assurance that companies behind technology, even if only internet-linked toys, will vigilantly guard children and their information. Earlier this year, a coalition of activist and consumer groups warned that smartwatches designed to help parents keep tabs on children could create privacy and security risks.