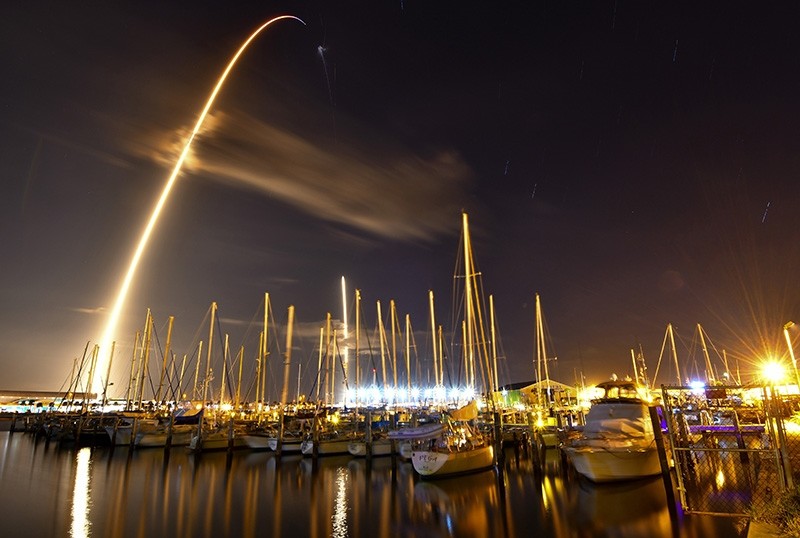 In this image made with an 8-minute long exposure the SpaceX Falcon 9 rocket launches from Cape Canaveral Air Force Station and lands as seen from from the Ocean Club Marina in Port Canaveral, Fla., Jan. 7, 2018. (AP Photo)
by Jan 08, 2018 12:00 am

SpaceX on Sunday blasted off a secretive U.S. government payload known as Zuma, a mission whose nature -- and the agency behind it -- remains a mystery.

"Three, two, one, ignition and liftoff," said a SpaceX commentator as the Falcon 9 rocket launched under cover of darkness from Cape Canaveral, Florida, at 8:00 pm (0100 GMT Monday).

The launch was initially supposed to take place in November but was postponed so the California-based company could take a closer look at potential problems with the fairing, or the nose cone part of the rocket that protects the payload.

Just what exactly needed such special protection and secrecy is still unknown.

Northrup Grumman, the maker of the payload, said it was for the U.S. government and would be delivered to low-Earth orbit, but offered no other details.

SpaceX and the Pentagon did not respond to requests for comment about the nature of the mission.

SpaceX has launched national security payloads in the past, including a spy satellite for the National Reconnaissance Office, and an X-37B space plane for the U.S. Air Force.

The company's live webcast did not show video coverage of the Zuma spacecraft after it separated from the first stage of the rocket, but confirmed that the fairings deployed and the payload was well on its way to low-Earth orbit.

After launch, SpaceX returned the tall portion of the Falcon 9 rocket to an upright landing at Cape Canaveral.

Cheers erupted at SpaceX headquarters in Hawthorne, California as the rocket glided seamlessly down to ground.

SpaceX chief executive Elon Musk's goal is to perfect the technique so that rockets can one day become just as reusable as airplanes, thereby lowering the cost of space travel.