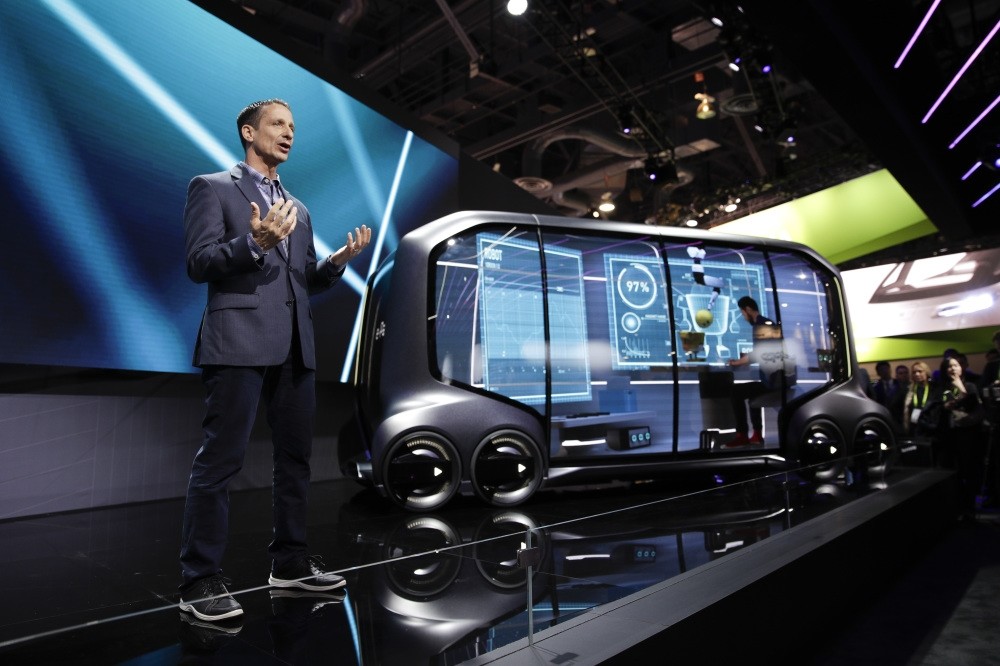 John Scumniotales of Amazon Alexa Automotive stands next to the Toyota e-Pallet concept while speaking at a news conference at CES International in Las Vegas.
by Associated Press Jan 11, 2018 12:00 am

Toyota says it will begin integrating Amazon's Alexa voice assistant into some of its vehicles, so drivers can tell their cars to play music or set a comfortable temperature at home before arriving. In choosing Alexa over rival Google Assistant, Toyota Connected CEO Zack Hicks says Amazon is the right partner as Toyota studies what future mobility might look like. The integration will start later this year. Toyota didn't say which car models will have it. Ford and Hyundai are among the auto companies already supporting Alexa. Hicks says there's nothing preventing Toyota from partnering with others in the future.

Meanwhile, Ford is partnering with Postmates, an on-demand delivery company, to study how merchants and customers might interact with self-driving delivery vehicles. Ford Motor Co.'s president of global markets, Jim Farley, says self-driving vehicles must do more than just move people. He says they can cut down on traffic and parking hassles by allowing groceries, dry cleaners and other businesses to share delivery vehicles that are programmed to take the most efficient route. The research will build on what Ford learned last year in a partnership with Domino's Pizza that sent semi-autonomous vehicles out to deliver pizzas. Postmates operates in 20 U.S. cities - including Chicago, New York and Los Angeles - and has a fleet of 150,000 couriers. Ford announced the partnership Tuesday at the CES tech show in Las Vegas.

The annual CES gadget show in Las Vegas is no longer just about private businesses showing off their latest technological wizardry. The public sector is also chiming in, including U.S. state governors, foreign envoys, a member of President Donald Trump's Cabinet and at least one royal. Prince Constantijn of the Netherlands is leading a delegation to promote more than 50 Dutch startups. Delegations are also representing Mexico and two different regions of France.

Along with boosting their economy, governments are also hoping to keep up with the growing possibilities of smartening cities with new technology. Federal Communications Commission Chairman Ajit Pai is skipping the show, though. Reports say it's because of death threats following a controversial vote to roll back rules that guaranteed equal access to the internet.