Behind smart gadgets, Amazon and Google waging a big war 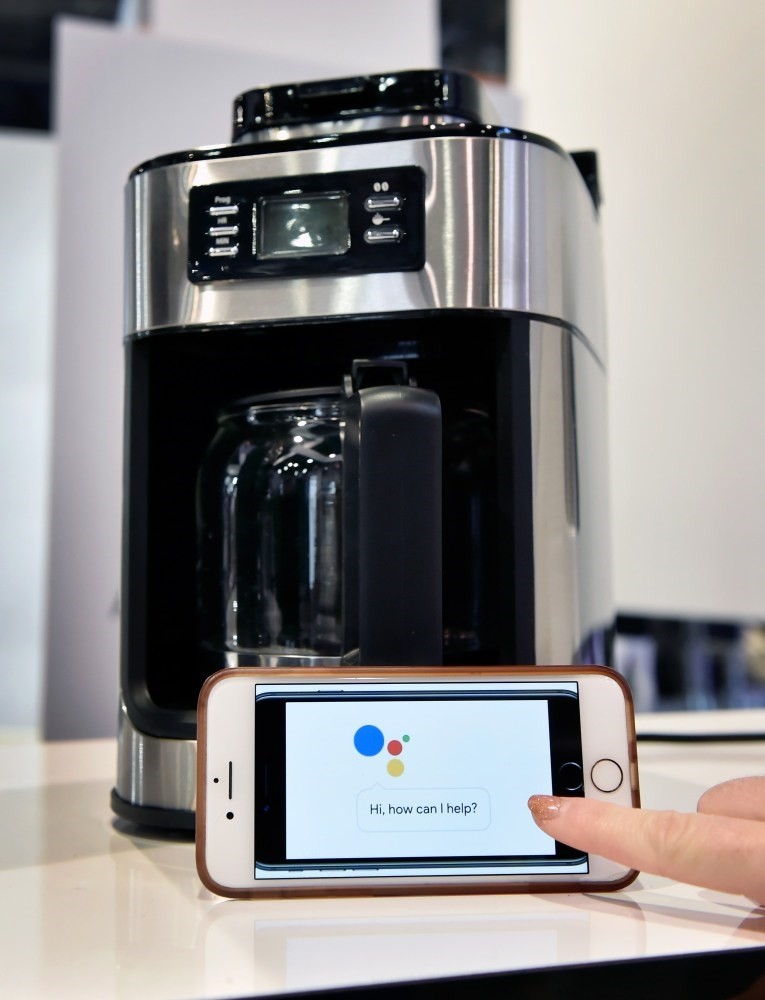 A Gourmia Barista Butler coffee maker on display at CES 2018 at Las Vegas Convention Center. The Wifi enabled appliance is compatible with Google Home and Amazon Alexa.
by Associated Press Jan 12, 2018 12:00 am

Both companies are working to weave their voice-operated digital assistants deep into our personal lives. Its similar to the decade-old battle between the iPhone and Google's Android system

The flash of the CES technology show in Las Vegas is all about robots, drones and smart gadgets. But its subtext is all about Google versus Amazon. Amazon, which grabbed an early lead in this market, opted for a more subtle approach. Instead of an advertising blitz, its Alexa digital assistant has merely been popping up regularly in "smart" products across the convention -everything from mirrors and toilets to headphones and car dashboards. The two companies -and to a lesser extent, Apple, with Siri, and Microsoft, with Cortana -are waging a fierce struggle to establish their assistants as de facto standards for a new generation of voice-controlled devices.

It's similar in some respects to the decade-old battle between the iPhone and Google's Android system in smartphones, or to the much older fight between Apple's Mac computers and Microsoft's Windows PCs. Both companies see the competition in existential terms. Getting shut out of voice devices could imperil Google's lucrative digital-advertising business, the source of its financial strength. Amazon, meanwhile, wants to ensure that its customers can directly access its "everything store" in contrast to now, when they mostly shop via devices and software systems controlled by Amazon's rivals. For consumers, meanwhile, the spread of these assistants offers new convenience in the form of an ever-present digital concierge. But there could also be some uneasiness about revealing even more about their habits, preferences and routines to distant computers that are always listening for their commands.

Google said this week it's integrating its voice assistant to allow remote control of some settings in Kia and Fiat Chrysler vehicles, while Toyota announced a similar arrangement with Amazon that enables drivers to ask Alexa turn the heat up at home before they arrive. But these smart products can -and sometimes do -support multiple assistants. Toyota Connected CEO Zack Hicks told reporters that "we're not exclusive" with Amazon, and that nothing prevents Toyota from partnering with others.

General Electric is showing off a suite of smart kitchen gizmos that connect its "Geneva" voice assistant to those of Amazon and Google. For example, you can preheat your oven by saying, "Alexa, tell Geneva to preheat the upper oven to 350." China's Baidu on Monday announced it was integrating its voice assistant into a lamp speaker and dome ceiling lights. Whether people will truly pay more for the ability not to walk over and flip a switch themselves is unclear. But manufacturers aren't taking the chance that they'll be left behind if one or the other assistant becomes dominant.

For the moment, voice competitors to Amazon and Google remain largely in the wings. Microsoft's Cortana assistant, which is available on PCs running Windows 10, allows hundreds of millions of users to search the web using Bing. But it hasn't been a huge factor in gadget announcements leading up to CES. In fact, Alexa is even starting to encroach on Cortana's turf by making its way onto some PCs.

Apple hasn't been prominent this year, either. But many manufacturers have adopted its HomeKit software in order to ensure they'll work easily with iPhones and Siri. Apple, however, had to push back release of the HomePod, its almost-$350 smart speaker, until "early" this year; it was originally scheduled for December 2017. Some analysts also say it's too soon to rule out Bixby, Samsung's AI assistant, which the company vowed to make a more central part of all its connected devices by 2020.