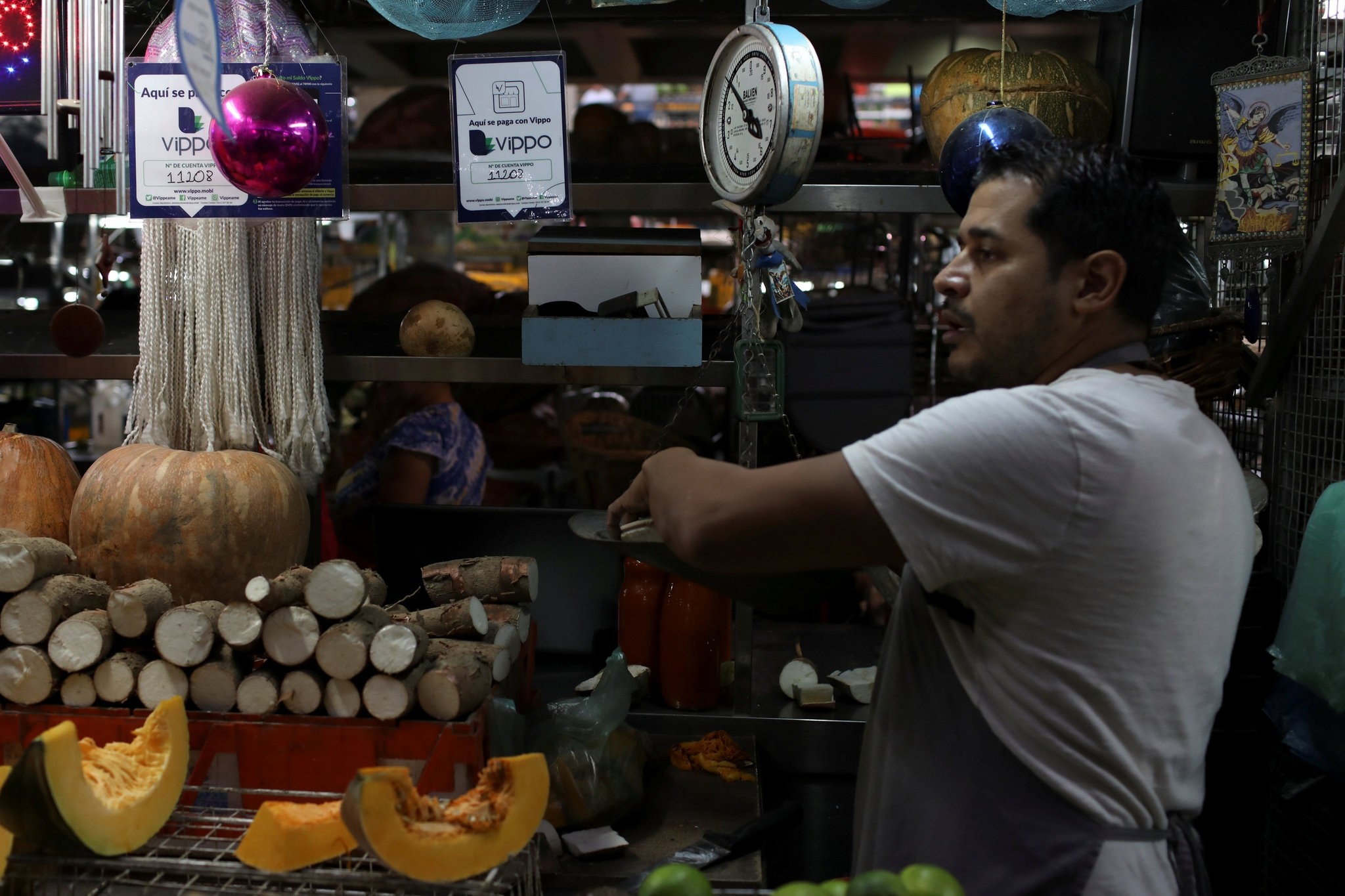 Information for the Vippo app at a fruit and vegetables stall at the Chacao Municipal Market, Caracas.
by Feb 16, 2018 12:00 am

In hyperinflation-stricken Venezuela, mobile payment apps are not a convenient service, but rather somewhat compulsory as people are short paper money

Widerven Villegas and his brother wash some 30 cars a day at a parking lot in Caracas. Despite charging less than 50 cents, nobody pays them in cash.

In tech hubs from San Francisco to Tokyo, payment is conveniently made through software on phones and watches on a routine basis. Amid a dire economic crisis in Venezuela a similar innovation is taking hold, though for very different reasons.

People from vegetable sellers to taxi drivers have registered to use mobile payment applications to attract customers who do not have enough paper money, which is in short supply due to soaring prices. The maximum daily amount Venezuelans can withdraw from cash machines is around 10,000 bolivars, around 4 cents at the black market exchange rate.

Venezuela's hyperinflation, one of the first of the digital era, is producing surprise winners in a tough business climate: small technology companies based in the crisis-stricken country.

"I accept transfers. I have Tpago, Vippo and almost all the applications out there!" said Villegas, 35, as he clutched a worn-out tablet and a basic cellphone. "We don't handle cash because our clients don't have it," he added. "With the application s I use, I've got their money before they've even left the parking lot."

Without these apps, even simple transactions like tipping a waiter or paying for parking become nightmares. Still, banking websites and mobile apps often crash, as the outdated telecoms infrastructure cannot cope with surging demand.

Requests for a taxi on the Nekso application, somewhat similar to Uber, doubled last year, according to its head of strategy Leonardo Salazar, speaking at the company offices that boast a Playstation console and ping pong table.

Vippo, a Caracas-based payment app, saw a more than thirty-fold increase in the number of people registering last year. Citywallet, born as a pilot project for online parking payments at a private university, was extended to several shopping centers.

"The cash crisis is getting worse every day but is giving us the opportunity to capture more and more transactions with our solution," said Citywallet co-founder Atilana Pinon, 29.

She and two partners set up the app which is now expanding to Chile, after winning a scholarship from its government.

Developers were surprised by the rapid adoption of the applications and are betting on further growth in 2018.

"There are times when the point of sale machine stops working," said Maria Lozada, selling cleaning products at a market stall in the wealthier Caracas district of Chacao. "This is the way to solve the cash crisis," she says, pointing to a Vippo sign.

At the end of 2017, the volume of banknotes increased by only 14 percent, less than half from a year earlier. That coincided with price rises of more than 2,500 percent, according to National Assembly figures.

Even leftist President Nicolas Maduro is getting in on the act, although critics blame him for the root problem.

"With the digital wallet we are going to perform miracles at all levels," Maduro said recently, announcing a QR code to be included on the government's social welfare identification card.

Despite some of the world's lowest internet speeds and a significant fraction of the population without bank accounts and cellphones, cash is falling out of favor in Venezuela.

"Perhaps our economy will be cash-less before Denmark," quipped Miguel Leon, an electronic engineer leading Vippo, in his open office featuring hammocks.