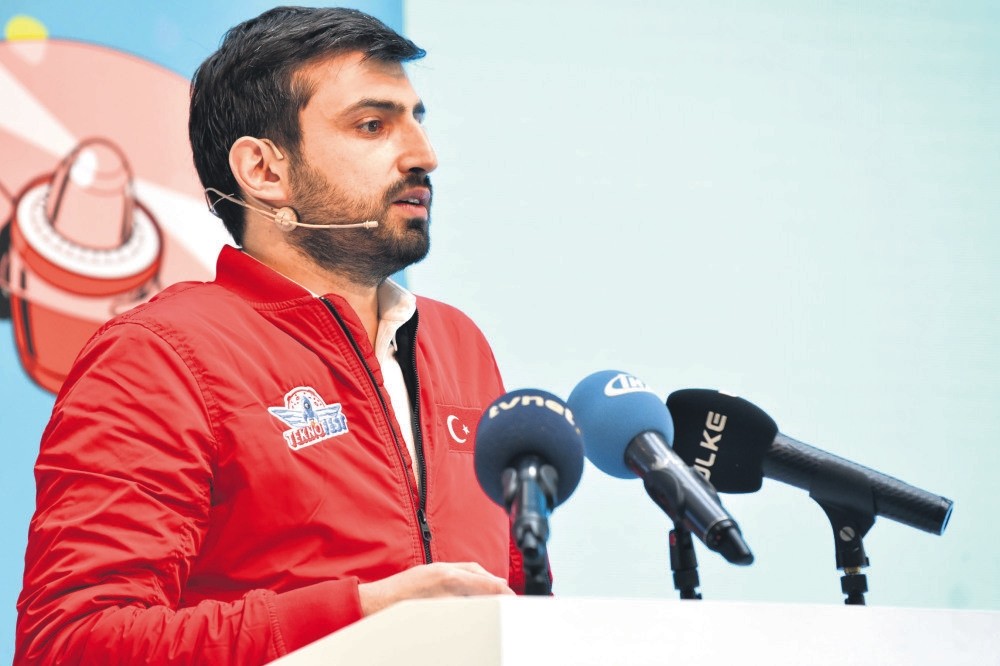 Turkey Technology Team Foundation (T3 Foundation) Chairman of the Board of Trustees Selu00e7uk Bayraktar delivers a speech during the introductory meeting of TEKNOFEST Istanbul Aerospace and Technology Festival, which is set to take place on Sep. 20-23.
by Daily Sabah Mar 08, 2018 12:00 am

Turkey is preparing to welcome its first aerospace and technology festival, which will be held on September 20-23 at the Istanbul New Airport; within the scope of the festival, technology competitions, seminars, summits and aviation demonstrations will be organized

Turkey's first aerospace and technology festival is set to take place on Sept. 20-23 at Istanbul New Airport. At the TEKNOFEST Istanbul Aerospace and Technology Festival, whose introductory meeting was held yesterday, aviation demonstrations, seminars, international venture summit and activities, as well as the largest award-winning technology competitions in Turkey's aviation history will welcome visitors at the IGA Istanbul New Airport.

The introductory meeting of the TEKNOFEST Istanbul Aerospace and Technology Festival, organized under the leadership of the Turkey Technology Team Foundation (T3 Foundation) in cooperation with institutions that play an important role in Turkey's goal of realizing national technology thrust and becoming a society that produces, was held at IGA Istanbul New Airport with the participation of T3 Foundation Chairman of the Board of Trustees Selçuk Bayraktar , T3 Foundation Chairman Mehmet Fatih Kacır and executives of organization's stakeholder institutions.

Within the scope of the festival, aviation demonstrations, including Parachute, Solo Turk, Turkish Stars and International Professional Aviation teams, seminars, award-winning technology competitions and domestic technology enterprises, as well as International Venture Summit which will include international enterprises, will be organized. The most important part of the festival will be the technology competitions organized in 12 different categories. By providing competition teams with technical equipment support to design and develop their own projects during the preparation process, it is aimed to support the youth's technological developments. The competition accepts applications from a wide range of age groups, from secondary school students to higher education graduates.

In his speech at the introductory meeting, Board of Trustees Chairman Selçuk Bayraktar said as the Turkey Technology Team Foundation they set out with the goal of turning Turkey into a society that produces national technology, noting that they aim to raise awareness in society about the importance of the development of national technology.

Bayraktar underlined the importance of educating children and young people with an interest in science, aviation and technology from an early age and said TEKNOFEST Istanbul's starting point is to direct children and young people to this area. Explaining that they aim for Turkey to achieve the position it deserves in aerospace and technology and to catch the trends of the future, Bayraktar said the technology competitions, which will be held as part of TEKNOFEST, were specifically prepared for this purpose.

T3 Foundation Chairman Mehmet Fatih Kacır said with the technology competitions to be organized within the scope of the festival, they aim to support young people with technical knowledge and skills to develop their own projects, highlighting that the festival stakeholders play a very important role in this sense.

Underlining that many of the festival's stakeholder institutions are the supporters of technology competitions in their fields of activity and expertise, Kacır said with TEKNOFEST Istanbul, they have created a platform where these high-tech companies can bring together their experiences and knowledge with young people. He explained that the T3 Foundation organizes technology trainings for different age groups at the DENEYAP Technology Workshops and that they support technology enterprises at the T3 Enterprise Center, suggesting that TEKNOFEST will give a new impetus to the work in this area.

With the technology competitions constituting the most important pillar of the festival and organized in many different categories, the aim is to raise awareness in Turkey about the production and development of national technology and to support the young people working in this field. The technology competitions whose applications are due on April 1, 2018 include the Airport Systems Internet of Things Applications, Unmanned Land Vehicle supported by Unmanned Aerial Vehicle (UAV), Humanitarian Technology, Unmanned Underwater Systems, Robotaxi, Robotics Conquest 1453, Rocket, Unmanned Combat Aerial Vehicle (UCAV), Swarm UAV and Artificial Intelligence competitions. TÜBİTAK International UAV Competition and TÜRKSAT Model Satellite Competition will also be held at TEKNOFEST this year. The teams winning the competitions will be presented with awards ranging from TL 30,000 ($7,898) to TL 250,000 ($65,844).