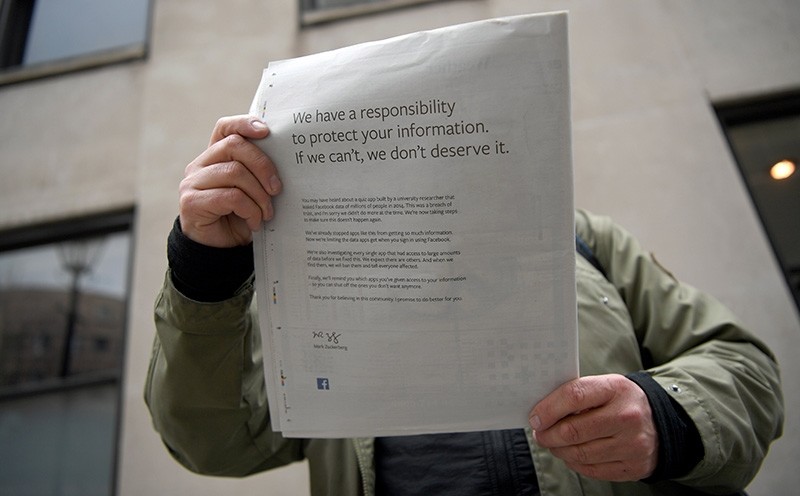 Opinion polls published on Sunday in the United States and Germany indicated that a majority of the public were losing trust in Facebook over privacy, as the firm ran advertisements in U.S. and British newspapers apologizing to users.

Facebook founder and chief executive Mark Zuckerberg apologized for "a breach of trust" in advertisements placed in papers including the Observer in Britain and The New York Times, Washington Post and Wall Street Journal.

The ads said the social media platform doesn't deserve to hold personal information if it can't protect it.

Fewer than half of Americans trust Facebook to obey U.S. privacy laws, according to a Reuters/Ipsos poll released Sunday, while a survey published by Bild am Sonntag, Germany's largest-selling Sunday paper, found 60 percent of Germans fear that Facebook and other social networks are having a negative impact on democracy.

Facebook is struggling to repair its reputation among users, advertisers, lawmakers and investors, as the hashtag #DeleteFacebook gains traction online.

The German poll published by Bild was conducted by Kantar EMNID, a unit of global advertising holding company WPP, using representative polling methods, the firm said. Overall, only 33 percent found social media had a positive effect on democracy, against 60 percent who believed the opposite.