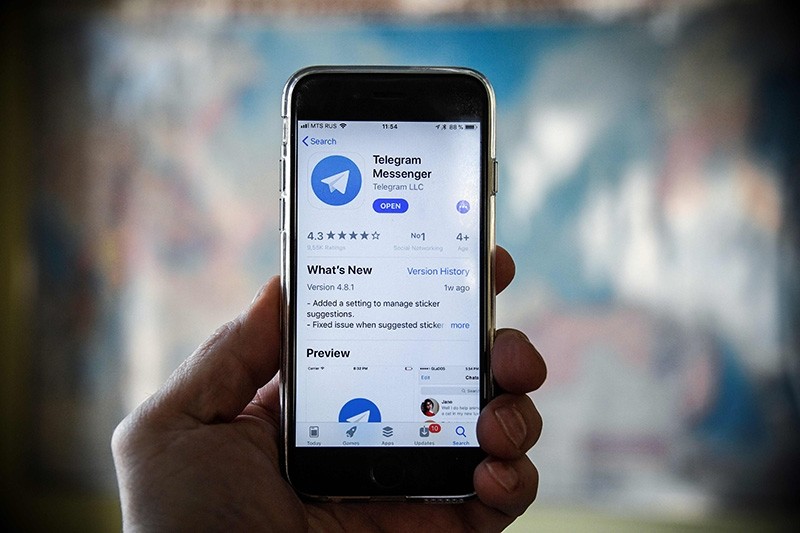 This illustration picture taken on April 6, 2018 in Moscow shows the Telegram messenger application displayed on the screen of a smartphone. (AFP Photo)
by Compiled from Wire Services Apr 06, 2018 12:00 am

Russia's state communications watchdog said on Friday it had filed a lawsuit to limit access to the Telegram messaging app after the company refused to give Russian state security services access to its users' secret messages.

Ranked as the world's ninth most popular mobile messaging app, Telegram is widely used in countries across the former Soviet Union and Middle East. Active users of the app reached 200 million in March.

As part of its services, Telegram allows users to communicate via encrypted messages which cannot be read by third parties, including government authorities.

But Russia's FSB Federal Security service has said it needs access to some messages for its work, including guarding against terrorist attacks. Telegram has refused to comply with its demands, citing respect for user privacy.

Russia's Roskomnadzor communications watchdog said it had filed a lawsuit at a Moscow court on Friday "with a request to restrict access on the territory of Russia to the information resources of ... Telegram Messenger Limited Liability Partnership."

But a lawyer representing Telegram said any ban would be unconstitutional and in any case impossible to enforce.

"The position of Telegram remains the same -- the demands of the FSB (security service) to provide access to private conversations of users are unconstitutional, not based on the law, and cannot be fulfilled technically and legally," said Pavel Chikov, who leads a human rights group representing the app.

Telegram's self-exiled Russian founder Pavel Durov has long said he would reject any attempt by the country's security services to gain backdoor access.

President Vladimir Putin's spokesman Dmitry Peskov on Friday said the service was a convenient tool to communicate with journalists and it would be a "shame" if an agreement between the app and authorities could not be reached.

"But the law is the law," he added during a regular briefing, quoted by Interfax news agency.

"In Russia we have many problems -- from poverty to awful state of the roads, from crime to poor medical care," opposition leader Alexei Navalny said via Twitter.

"But the state is engaged in blocking Telegram in our name ...in what way is Telegram making life in Russia any worse? Whom is it bothering?" he said.

In September 2017 the FSB demanded the encryption keys, Durov said, prompting a formal complaint when the request was rejected.

The Roskomnadzor had threatened to ban the app in June last year for failing to provide its registration documents. Although Telegram later registered, it stopped short of agreeing to the regulator's data storage demands.

Companies on the register must provide the FSB with information on user interactions.

From this year they must also store all the data of Russian users inside the country, according to controversial anti-terror legislation passed in 2016 which was decried by internet companies and the opposition.